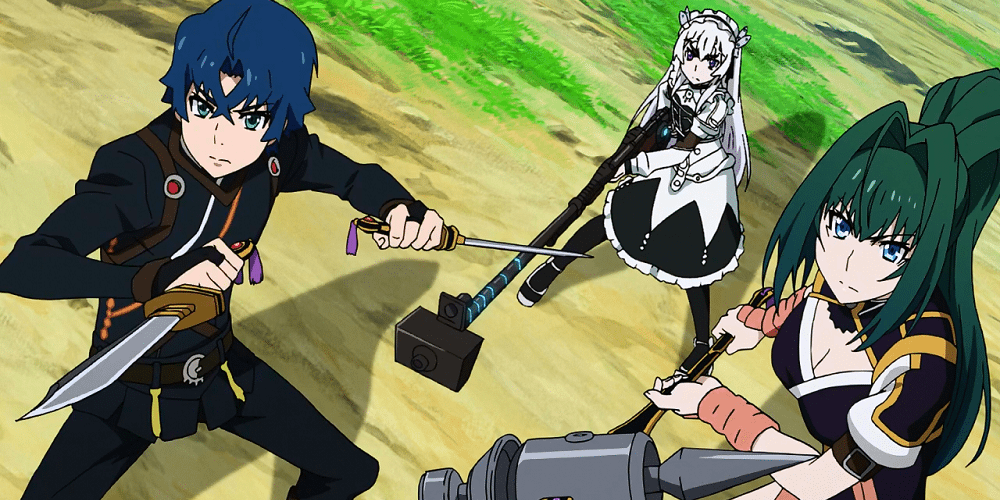 ‘Hitsugi no Chaika’, also known as Chaika the Coffin, is your typical adventure romp and is filled with a balanced number of plot twists and turns. The story never really gets too over-complicated but has a little bit of detailing here and there that you’ll have to pay attention to while watching it. Unlike other similar anime, what’s really refreshing about ‘Hitsugi no Chaika’ is that it has absolutely no fanservice. While the story of the anime is just average, its three main characters are wonderful. All of their interactions are very entertaining and at times, can even be quite hilarious. Even the side characters of the anime are not all that bad and they either add some comedy to it or they have some deeper role in the plot.

Being a Studio Bones creation that is known for some of the best anime like ‘Fullmetal Alchemist: Brotherhood‘ and ‘My Hero Academia‘, this one has more of a”standard” animation style that does not really stand out in any way. The character designs have been done really well and even the colors of the backgrounds are able to reflect on the dark vibe of the anime, whenever necessary. The background sounds fit really well and one thing about the music department that really gets your attention is its catchy opening theme. It just perfectly sets the vibe for the anime and prepares you for what lies ahead.

Overall, ‘Hitsugi no Chaika’ is just an average anime that can be enjoyed by everyone. It does not really have too much going on but at the same time, it does not even feel underwhelming. It sets a pretty good example for how exactly a light-hearted fantasy should be and regardless of whatever genre you’re into, I would recommend you to give this one a try.

Hitsugi no Chaika Season 3 Release Date: When will it premiere?

‘Hitsugi no Chaika’ season 1 premiered on April 10, 2014 and with a total of 12 episodes, it came to an end on June 26, 2014. This was then followed by a season 2 titled ‘Hitsugi no Chaika: Avenging Battle’ which released on October 9, 2014 and went on till December 11, 2014. The first season of the anime was an absolute hit and soon after its release, many fans were anticipating a new sequel season of it.

While season 2 of ‘Hitsugi no Chaika’ still manages to retain some of its fun elements such as good graphics and cool action scenes, it fails to be as good as season one. Also, though the ending of season 2 is a bit too abrupt, it is still quite conclusive. So, it seems less likely that there will be a season 3 of this anime. But even then, if we do receive any confirmed news regarding its renewal or ‘Hitsugi no Chaika’ season 3 release date, we will update it here in this section.

Though ‘Hitsugi no Chaika’ has been licensed under Sentai Filmworks, it has not received an English Dub yet. But you can still watch the anime with its original Japanese audio along with English subtitles on Crunchyroll.

The Taboo Emperor Arthur Gaz possessed the mighty iron fist for over 500 years. This not only granted him immense strength but also helped him rule the Gaz empire and conduct brutal experiments on his own people. But when a group of brave mighty heroes defeated him in battle, his rule came to an end and soon after his death, a 300-year-long war between the Gaz Empire and the alliance of the six nations finally stopped.

Five years after these events, Tooru Acura struggles to find a job in this new world where his experience as a skilled saboteur does not even matter anymore. The only thing he is good at is fighting and in this peaceful world, no one really cares about that. This is when a white-haired wizard girl Chaika Trabant comes in, who wanders the land with her father’s coffin resting on her back. She walks around looking for all the remains of her father that she can find so that she can peacefully give him a proper burial. While she sets out to hunt down these remains, she decides to hire Tooru and his sister Akari to give her a helping hand.

All seems to be going well when the Acura siblings somehow get to know about her true identity and realize that men are being sent to arrest her. Now they can either choose to stay with her and help her look for her father’s remains or they can get out-of-the-way and let their continent remain peaceful.

Akari Acura is Tooru’s young adopted sister who just like him, was once a saboteur. She really loves her brother and clings on to him wherever he goes, so when he goes out to lend a helping hand to Chaika, she tags along. She has green hair that she ties up in such a way that it looks like she has two big ears on top of her head. She always has a blank expression on her face and does not really know how to express emotions.

The only times she is able to show some emotion is when she’s expressing her admiration for her brother or when she’s fighting battles. While Tooru keeps ignoring her advancements towards him, she gets really pissed when he interacts with other girls and even shows violent tendencies. Being orphaned at a very young age, she realizes the true value of having a family and firmly believes in staying loyal to her brother.

Tooru is a 20-year-old unemployed young man who has lost his sense of purpose since the war has ended. After he loses his life’s purpose, he just spends almost all of his days just eating and sleeping. He was once a great saboteur but now he lacks the professional skills to find a real job. He later starts to feel that the only way he can restore this sense of purpose is by chasing Chaika.

For his age, he has an average height and a very thin-build. He has blue colored hair and is usually seen with a big smile on his face. He is very cheerful and even loves to play perverted pranks on the people around him. But despite this, he is really cold inside and shows excitement towards killing people in the war. After the war gets over and he loses his life’s purpose, he just spends almost all of his days just eating and sleeping.

Chaika Trabant is a 14-year-old wizard who happens to meet Tooru by chance but then ends up making him her traveling companion. She carries a giant coffin on her back and claims that she is looking for the remains of her father that are scattered everywhere. Her eyes are huge and purple in color and she is a little insecure about her slightly huge eyebrows. Unlike Tooru, she hates violence and prefers to solve problems peacefully. She is very kind to everyone and is even willing to help the ones who are not her friends. She also seems to suffer from minor amnesia but she never forgets the motive of her quest.