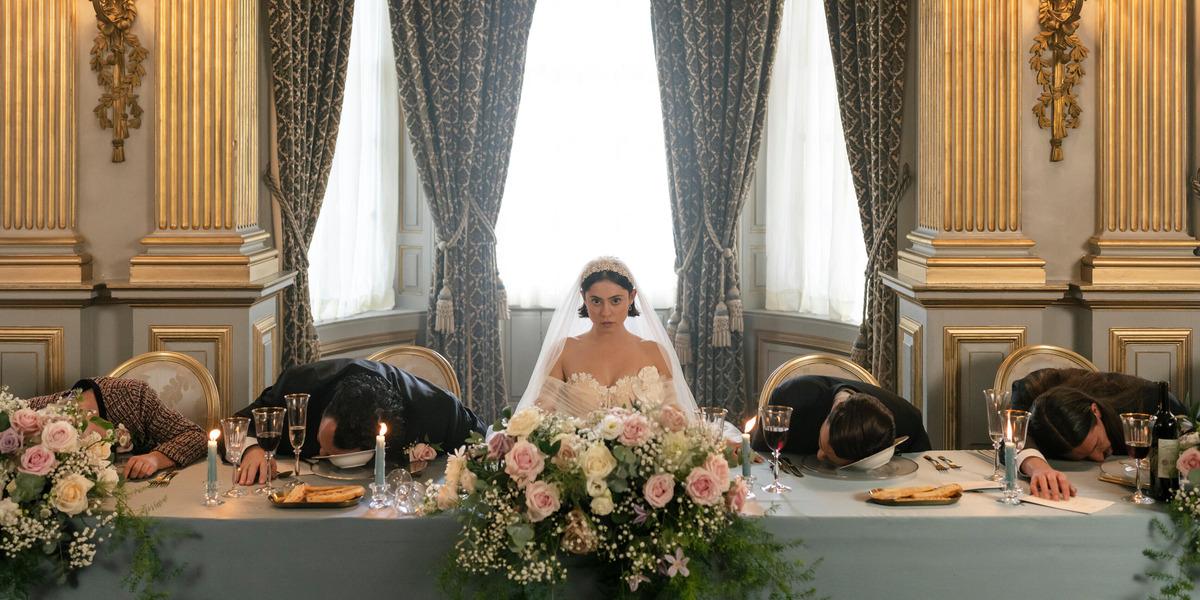 Hulu’s ‘Wedding Season’ is a British action series created by Oliver Lyttelton. The high-octane narrative follows Stefan, a hopeless romantic who is dragged into a dangerous conflict after his ex-lover, Katie, is accused of murdering her new husband and in-laws. As the story progresses, viewers learn more about Katie’s past.

Meanwhile, Stefan tries to prove Katie’s innocence. However, a shocking twist in the finale will leave viewers scratching their heads for answers. If you are looking for some explanation about the show’s events, here is everything you need to know about ‘Wedding Season’ and its explosive ending. SPOILERS AHEAD!

‘Wedding Season’ opens with Katie’s wedding with Hugo Delaney being interrupted by Stefa, Katie’s ex-lover. After Katie leaves him a voice mail, Stefan believes she is in love with him and tries to stop the wedding. However, Katie insults Stefan and asks him to leave. Later, Stefan is arrested by the police after the Delaneys are found dead at the wedding, and Katie goes missing. Katie is the prime suspect, and Stefan is interrogated by inspectors Metts and Donahue about his relationship with Katie.

Flashbacks reveal that Katie and Stefan met at a wedding and were instantly attracted to each other. They continued bumping into each other at weddings and hooked up. However, Katie reveals that she is getting married to Hugo and has no romantic interest in Stean. Nonetheless, the two continue hooking up over the summer. In the present, Katie lures Stefan away, and the two are forced to go on the run after a criminal organization known as “The Block” attempts to capture them.

In the flashbacks, Katie takes Stefan to the Delaney Casino in Las Vegas, where she steals a data drive with mysterious video footage on it. Meanwhile, in the present, the duo is captured by Katie’s ex-husband, Conrad. He reveals that The Block wants them both dead. However, Katie manages to conjure an escape plan. Nonetheless, Stefan is captured by Metts and Donahue and learns of Katie’s past.

Flashbacks reveal that the Delaneys murdered Katie’s father, and they stole the deed to their bar. As a result, Katie plans to avenge her father’s death and reclaim the property. Hence, she decided to marry Hugo and plotted to poison the entire family on the wedding day. She holds evidence of Hugo cheating on her in the data drive and plans on using it as grounds for divorce. However, Katie has second thoughts at the last moment and refrains from killing the Delaneys. Nonetheless, they end up dead, and Katie comes under suspicion.

Wedding Season Ending: Who Killed the Delaneys? Does Katie Get Revenge?

In the season finale, Katie and Stefan suspect that Metts is connected to The Block after she tries to kill Stefan in police custody. Therefore, they track down Metts at a wedding in Texas. Katie corners Metts after Stefan triggers her allergy and steals her insulin shot. Katie holds Metts at gunpoint and forces her to reveal the truth about the Delaneys’ death. Metts confesses to killing the Delaneys on orders from The Block. The Delaney family was causing trouble for The Blocks, and the task of dealing with them was assigned to Metts.

Metts learned about Katie’s vendetta against the Delaneys. She orchestrated the plan to kill the Delnaeys and pinned the blame upon Katie. However, Metts reveals that Katie had already poisoned Mr. Delaney, leading to his death. Stefan is devastated at the revelation and ends things with Katie. However, when Metts and The Block corner Katie at a small church, Stefan decides to help her. He formulates a plan to help him and Katie safely flee from The Block.

As per Stefan’s plan, Katie makes a deal with The Block. She attempts to trade the deed papers she stole in exchange for The Block removing the evidence of her involvement in the Delaney family’s death. Since Metts’ confession proves that Katie is innocent, she actually owns the deed papers to her father’s property as her prenup with Hugo still stands. Hence, Katie succeeds in making a deal with The Block. However, unbeknownst to him, Stefan bluffed about uploading Metts’ confession on the internet. Therefore, Katie sacrifices her father’s property to live a normal and crime-free life. Ultimately, Katie comes to her senses and gives up her quest for revenge.

Do Katie and Stefan End Up Together? Is Katie Dead?

Throughout the season, viewers see Stefan being head over heels for Katie. However, she does not reciprocate his feelings and is solely focused on her quest for revenge. However, Stefan continues to go out of his way to help Katie. Soon, Katie finds Stefan becoming a source of comfort and is drawn toward him. As a result, the series delves into the thriller genre as both Katie and Stefan must first prove their innocence before they can reflect on their feelings for each other. Hence, their romantic future goes through several ups and downs as episodes progress.

Nonetheless, Stefan remains by Katie’s side until the end. However, after he learns that Katie is a murderer, he decides to let go of her. Stefan realizes that he has pushed himself too far for Katie’s sake. On the other hand, she lied to him about her involvement in the Delany family’s death. Hence, a disgruntled Stefan leaves Katie alone to deal with the aftermath of her actions.

Meanwhile, after Stefan leaves, Katie loses interest in her quest for revenge and craves a common life. Hence, she decides to make a deal with The Block. In the end, Stefan is moved by Katie’s decision to leave her criminal life and make a fresh start for his sake. Katie makes a grand romantic gesture by revealing that if anything happens to her, the deed to her the property deed will be referred to Stefan. As a result, Stefan realizes that Katie has feelings for him too. Hence, he forgives Katie, and the two decide to take their relationship to the next stage.

Ultimately, Stefan and Katie end up together. We see time enjoying their common life as they continue to fall in love with each other. Stefan mentions that he is in no rush to marry Katie as he does not want to tie her down. On the other hand, Katie is ready to make things official. Therefore, the duo’s journeys come full circle as they finally understand their needs and wants in life and from their relationship.

However, in the episode’s final moments, Katie and Stefan arrive near their car to head home from the bar. Just as Katie heads to the driver’s seat, the car explodes, leaving Stefan horrified. The explosion implies that Katie is dead, and her death will deeply impact Stefan However, it is also likely that the explosion was a part of Katie’s plans, and she is forced to go away from Stefan to keep him safe. Nonetheless, what new trouble Katie might find herself in remains to be seen.

Read More: Is Wedding Season Based on a True Story or a Book?