Is CHiPs Based on a True Story? 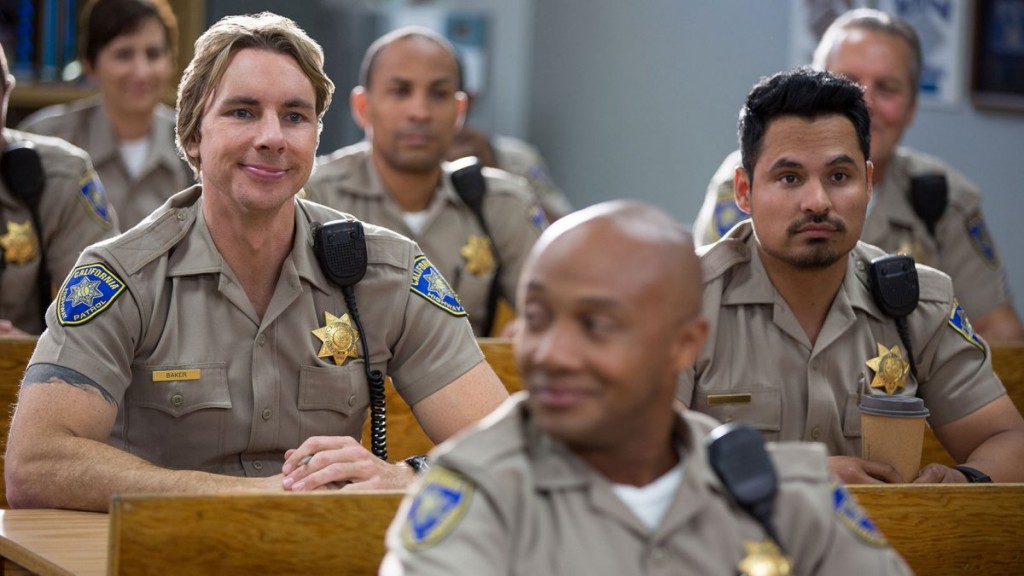 Directed by Dax Shepard, ‘CHiPs’ is a comedy movie that pairs up two Los Angeles patrolmen by the names of Jon Baker (Shepard himself) and Frank “Ponch” Poncherello (Michael Peña). They get involved in a plot revolving around a heist, and the duo has to wade through the murky waters as the police themselves seem to have a part in it.

The 2017 movie merges comedy with its action appeal and delivers a buddy cop comedy with lots of high-octane chases. ‘CHiPs’ aims to package in a barrel of laughs while still retaining the action quotient. The movie is laced with gags and wonky situations to get a laugh out of the viewers throughout the runtime. Regardless, one might wonder if the story of the film is based on reality. Here is what we know.

Is CHiPs a True Story?

No, ‘CHiPs’ is not based on a true story. Instead, the movie is based on the hit TV show of the same name that ran from 1977 to 1983. Created by Rick Rosner, the original show enjoyed a successful run and made its way into the viewers’ hearts. One of those taken in by the show was Shepard. In addition to starring in the movie and directing it, Shepard also penned the story.

The writer-director described how Rick Rosner’s creation transported him to the locales of the Los Angeles streets, where the show takes place. Shepard was a child when the show aired. Fascinated by the show, Shepard initially wanted to make a movie with Peña that would only serve as a tribute to the eponymous show. However, the name recognition of the show was a big factor, and Shepard ended up making a movie version of ‘CHiPs.’

In an interview with Vulture, the actor elaborated on why he chose to make a movie about the show. Shepard said, “Because I’m always looking for something that will hold both comedy and motor sports. I’m looking for anything that I think I can combine those two things and that someone will make. So this movie’s got the safety net of being a global brand, a global property. I couldn’t have gone into any studio and said, “The movie’s called, uh, Eat My Dust” — well, that’s actually a title — “Burn Rubber, and it’s me and Michael Peña, and we’re on motorcycles.” They’d go, “No thank you.”

He further added, “It had to have a safety net, and the safety net I found was CHiPs, which as a kid I saw it, I was 2 when it came on originally and I think I was 8 when it went off the air. And I lived in Detroit, and it was cold and cloudy every day, and you’d turn this show on and for an hour you were in California, and it was beaches and palm trees and this weird pair on motorcycles, and as a kid, I was in. I didn’t follow any of the plotlines, and I didn’t know what the show was about, but it just had California and motorcycles.”

“I thought, this could hold a Bad Boys version of the movie, because your heroes have motorcycles, so it’s got an inherent coolness if we just keep pushing in that direction. So basically, it’s cynical, I’m a cynic, that’s why.” Shepard concluded. In case you’re wondering if the show is rooted in real-life, let’s go back to the 70s. During the filming of an episode of “The Steve Allen Show,” an emergency rescue unit of the Los Angeles County Sheriff’s Department was reportedly called in to train Allen to scuba dive for the show. Rosner was present there, and during the activity, he befriended a few officers.

Rosner later took a course at the LASD. On one night, when Rosner and his partner took a break around a doughnut shop in the city, they encountered two California Highway Patrolmen (CHP, hence the title having those letters in capital form), riding motorcycles donning dark-colored helmet visors and sparkling boots. Just when the pair took off their glasses and helmets, Rosner got the idea for the show. Explaining all this in an interview with New York Times, the TV producer said, “Right there, it hit me. That’s a TV series. Two guys racing around the L.A. freeway system. Two good guys doing a job.”

Though in real life the patrolmen of the CHP do not ride in pairs, the show found a way to make it work. The show was produced in cooperation with the CHP, but it is a different story in the case of the movie. The CHP did provide some assistance during the making of the film, and the actual California Highway Patrol Central Station in Los Angeles was provided as one of the filming locations for Shepard’s ‘CHiPs.’ However, the movie does not have the backing of the CHP, certainly not in the way the show did.

The 2017 movie acknowledges the aforementioned fact with a disclaimer at the beginning, reading, “This film is not endorsed by the California Highway Patrol. At all.” With big chases come exhilarating stunts and ‘CHiPs’ has plenty of them. Interestingly, the leading duo of Shepard and Peña performed most of their own stunts. While ‘CHiPs’ may have been divisive among audiences, it is a labor of love for Shepard.

Read More: Where Was CHiPs the Movie Filmed?