Is Chrissy Metz Married? Does She Have Children?

Chrissy Metz is an American actress and singer who is widely recognized for her role as Kate Pearson in NBC’s hit drama series ‘This Is Us.’ She earned nominations for a Primetime Emmy Award and two Golden Globe Awards for her impeccable performance as a jilted girlfriend who finally finds love in Toby, played by Chris Sullivan. Her other notable credits include ‘American Horror Story: Freak Show’ and ‘Breakthrough.’

The lead singer of the band ‘Chrissy and The Vapors’ once got a chance to exhibit her vocal talent on the show as the producers were impressed by her skills and even added it to the script. While her fans were stressing about the future of Kate and Toby’s relationship, the focus eventually shifted to the actor’s real-life dating history. Here is everything we have know about it!

Born on September 29, 1980, Christine Michelle Metz AKA “Chrissy” spent her formative years in Japan as her father, Mark, was stationed there as a naval officer. The Florida-born had a tumultuous childhood but grew up to share a close equation with her mother, Denise. Her parents parted ways when she was eight, and the family moved back to Gainesville, Florida, with Denise’s new husband and his kids. 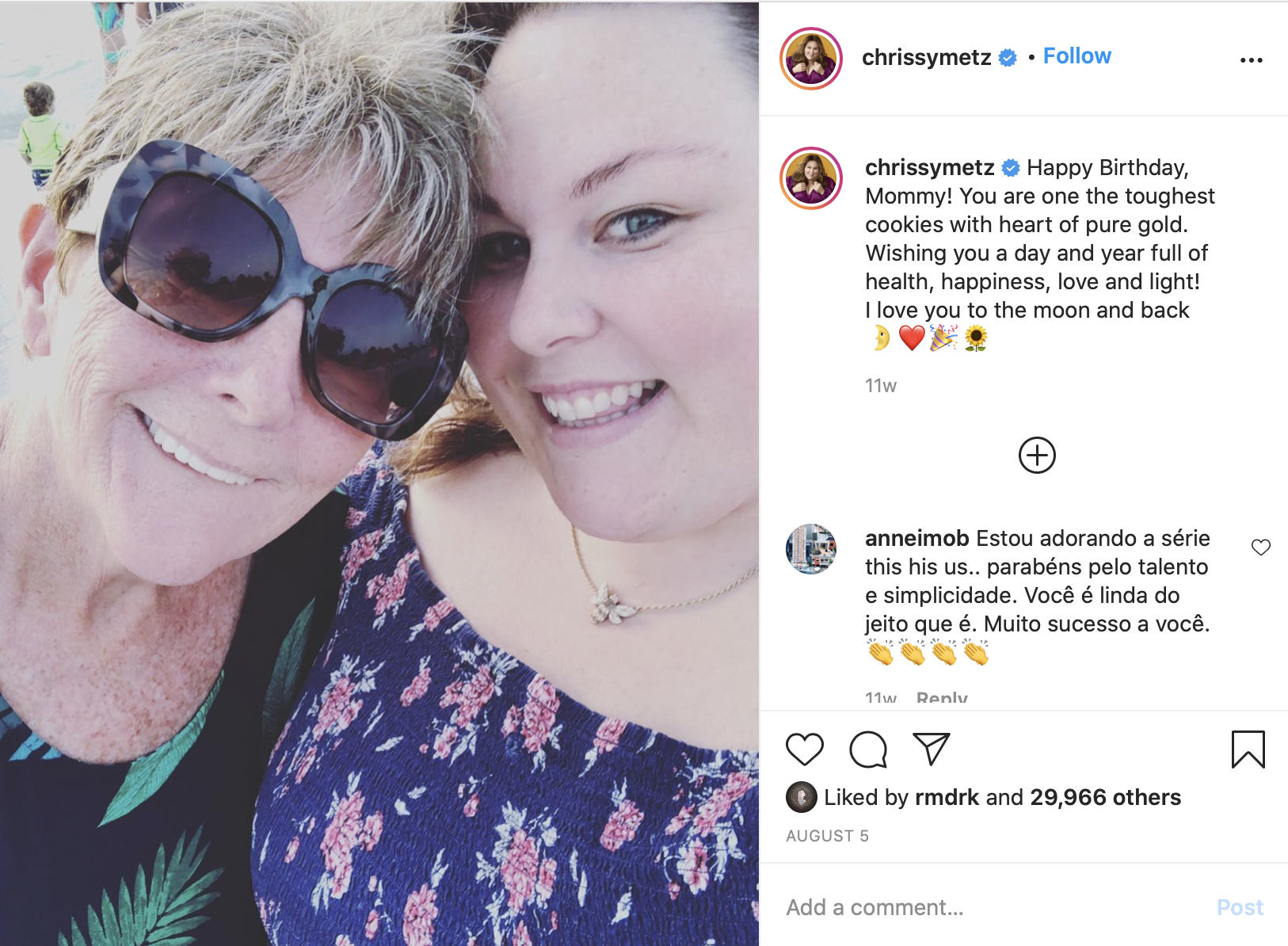 During her teen years, Chrissy completed her education while living in a full house as she shared the space with two siblings, two half-siblings, and her dog, Jack. Just like Kate Pearson on ‘This Is Us,’ the actor behind the role has also been battling body-image issues since her childhood. In her memoir ‘This Is Me: Loving the Person You Are Today,’ Chrissy claimed that her heavy physical appearance seemed to offend her step-father, who used to hit and humiliate her for it. Thus, triggering the traumatized child to eat more.

The artist attributes a handful of reasons for her being able to make it in the industry. Apparently, her mother inculcated the value of working hard early on as the future ‘Breakthrough’ star had to work at McDonald’s in her hometown to buy her favorite pair of sneakers that cost $120. In addition to this trait, she was also lucky to have found a manager who treated her with the utmost respect, and this motivated her even further to be nice to everyone around her.

Before her breakthrough role, Chrissy Metz was married to a British journalist and a freelance writer, Martyn Eaden. The now-former partners got engaged in 2007 and had a courthouse ceremony on January 5, 2008, in Santa Barbara, California. In her memoir, the actress openly talks about how she met him on a dating app in 2006. Eaden’s sweet gesture to overcome the long-distance by traveling to Los Angeles all the way from Sheffield, England, won her heart. Sadly, their relationship began to deteriorate irreversibly.

With no animosity between them, they mutually decided to part ways in January 2013. The “irreconcilable differences” led Eaden to file for divorce in November 2014, and their seven-year-long marriage legally ended on December 11, 2015. In 2016, the happily divorced Chrissy revealed that she was dating the former ‘This Is Us’ cameraman, Josh Stancil. At the TCA tour in 2017, the TV star laughingly narrated how he would have to film her kissing her on-screen boyfriend Toby.

Chrissy and Josh stayed together for a couple of years as she confessed to Wendy Williams in 2018, that she was back to being “single.” After only eight months, she got involved in a romantic relationship with the music composer, Hal Rosenfeld. The couple went public with their romantic union in November 2018. Unfortunately, after the “honeymoon” fever settled a few months later, the two decided to call it quits. So as of 2020, Chrissy is single and ready to get back on the dating scene again! 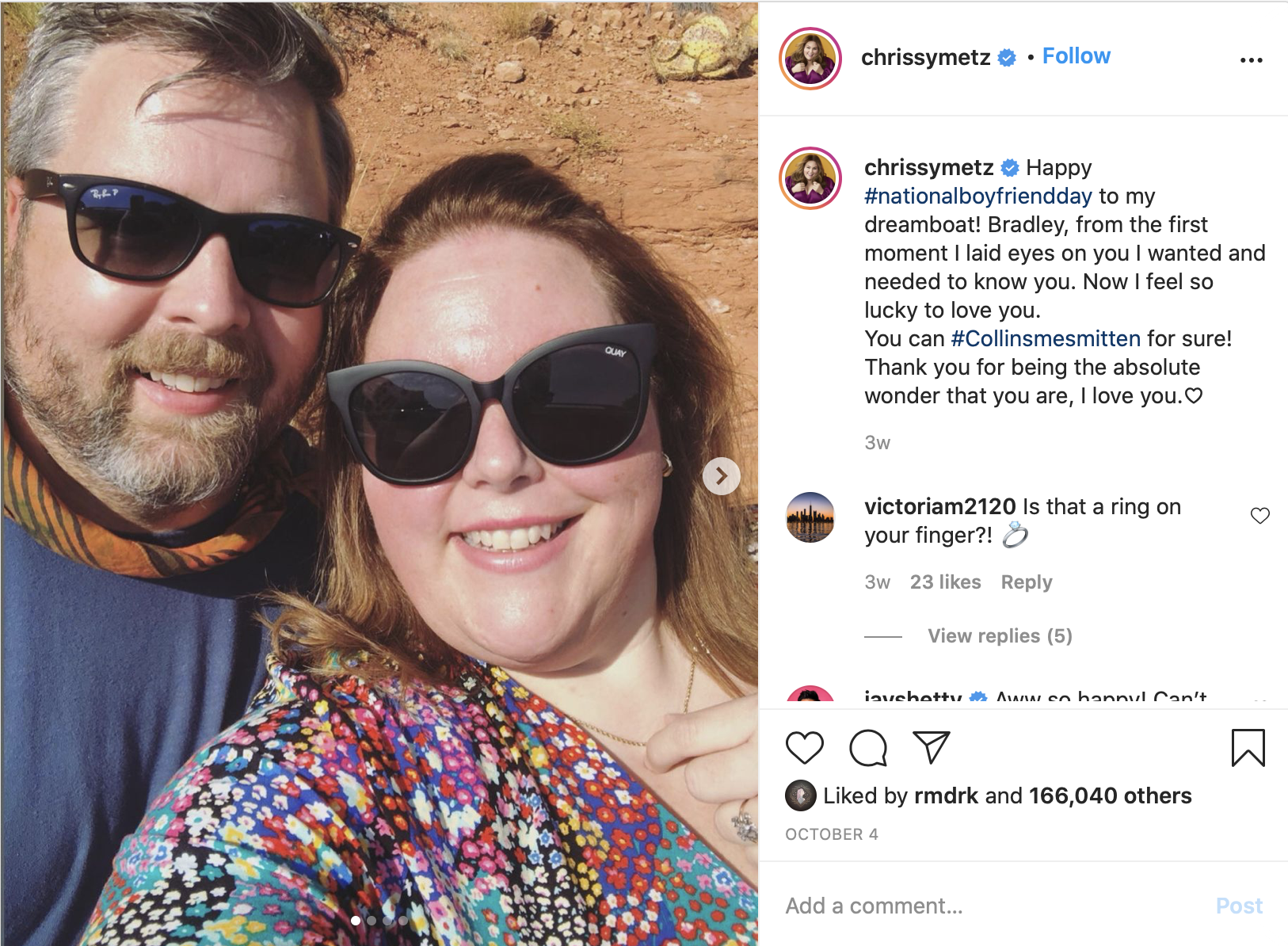 Despite the heartbreaks and immensely busy shoot life, Metz manages to find happiness in relationships and feels no hesitation in sharing her joy with the fans. The self-proclaimed hopeless romantic has fallen for the Nashville native, Bradley T. Collins, and the two have been dating since May 2020. Their budding romance is still in its initial phase, but her followers wish her the best of love and luck for her future!