Is Derry Girls Based on a True Story?

Created by Lisa McGee, Netflix’s ‘Derry Girls’ is a British teen show set in the Northern Irish city of Derry. The series takes place in the early 1990s and revolve around a group of friends- Erin Quinn, her cousin Orla McCool, and friends Clare Devlin, Michelle Mallon, and James Maguire. Navigating the last years of their school lives, the five teenagers are adversely affected by the ongoing conflict in the region about Northern Ireland’s position within the United Kingdom.

Starring Saoirse-Monica Jackson, Louisa Harland, Nicola Coughlan, Jamie-Lee O’Donnell, and Dylan Llewellyn, the series portrays the everyday life of teenagers and how the volatile environment around them affects their actions. The historical implications behind the events in the series have made many viewers wonder if the sitcom is actually based on real-life incidents or is purely a fictional tale. Well, here is everything we know about the same!

Is Derry Girls a True Story?

‘Derry Girls’ is partially based on a true story. Created and written by Lisa McGee, the show is inspired by her own teenage years. Growing up in Derry, she was, on some level, used to the tensions in the region due to the Northern Ireland conflict, more commonly known as the Troubles. It was only when Lisa moved to England that she realized some things she thought were ordinary were anything but that for most of the world.

Though the conflict’s exact starting point has always been a point of contention among scholars, the Troubles started in the latter half of the 1960s. In essence, it was among two groups who disagreed with Northern Ireland’s position within the United Kingdom. The Unionists/Loyalists were those who wanted the country to remain within the United Kingdom. On the other hand, the Irish Nationalists/Republicans wanted Northern Ireland to combine with the Republic of Ireland and form a united Irish nation.

It should be noted that the Unionists were primarily Protestants, whereas a significant portion of Nationalists were Catholics. Despite using religious terms to refer to the conflicting groups, the conflict was not about the people’s religious faith but rather their wishes for their country. The Troubles lasted over three decades of endless wars and conflicts and spilled over to the Republic of Ireland, England, and continental Europe.

Ultimately, on April 10, 1998, the Good Friday Agreement, or the Belfast Agreement, was signed by multiple leaders of the warring factions to restore peace in the region. While Northern Ireland remained a part of the United Kingdom, it gained a bit more leeway regarding civil and political rights, police reforms, and many more issues. The country’s citizens then voted upon the agreement through a referendum held on May 22, 1998, and the agreed-upon policies came into effect starting December 2, 1999. 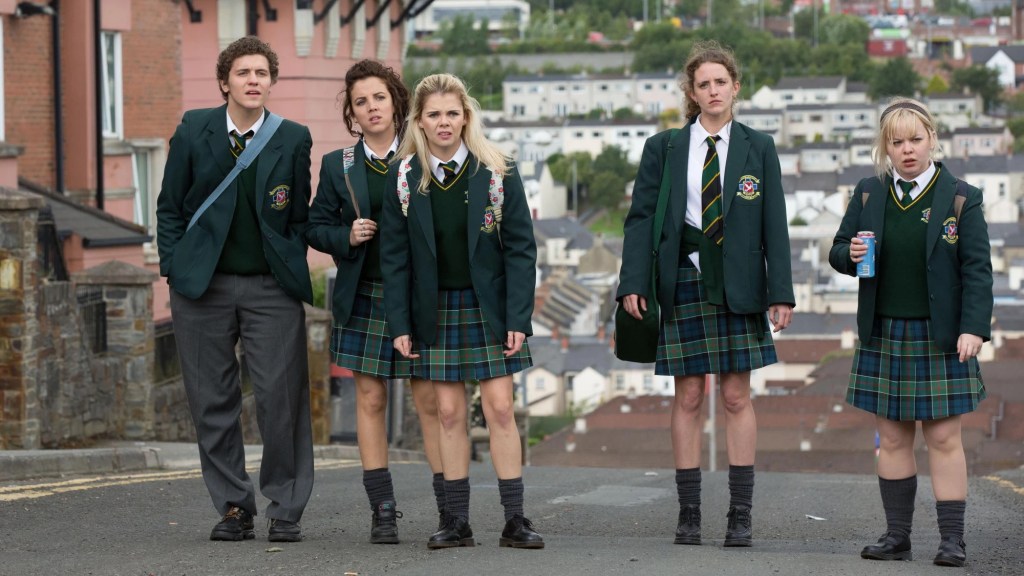 For writer Lisa McGee, the teenage characters in the show were inspired by herself and her adolescent companions. “I’d always felt that my group of friends at school were funny, and I’d always wanted to write something about a group of female teenagers who were the leads and were being the ridiculous people, not just the “friend” or “sister,” she told the New York Times.

Lisa continued, “I also went to an all-girls convent school, so the cleverest person was a girl, the sports hero was a girl, and the class clown was a girl. Growing up, everyone who was powerful or interesting or funny was female.” Interestingly, the character of Erin Quinn seems to be a reflection of the writer herself, especially since she inspires to work in the same field. The cultural shock for Lisa when she moved out of Northern Ireland was massive regarding the expected role of women, among other things.

“When I went to university, I realized Derry was different from all other places. The women, traditionally, were the breadwinners because it was a factory town and, apart from shirt factories, there wasn’t any other employment really, so a lot of the men were unemployed,” the writer explained her childhood experiences. “So we grew up in this sort of weird society where the dads were looking after the kids and the mums were going to work.”

One must understand that while Lisa was eager to use her friends as inspiration for characters in her work, she had initially planned on a modern setting and did not want to focus on the Troubles. For her, writing was a way to escape into another world and bringing something that plagues her childhood seemed counterintuitive to the process. However, Liz Lewin, who had been there when Lisa had accidentally horrified her English audience with her “normal” childhood events, convinced the writer to bring the historical events to life.

One can easily say that ‘Derry Girls’ is partially inspired by the real-life experiences of the writer. Nevertheless, Lisa utilized her penchant for humor to make a grim topic comedic, relatable, and yet informative for the viewers. Though the effects of such a ravaging conflict were adverse on those growing up during the Troubles, ‘Derry Girls’ tells how the people were able to find joy and hope even in the bleakest of times.