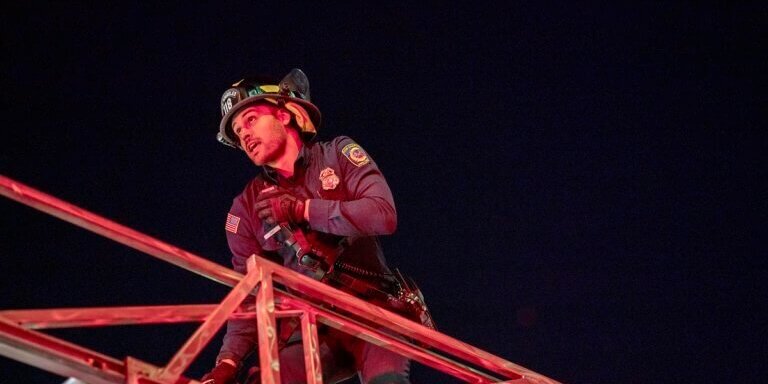 ‘9-1-1’ or ‘911’ follows the lives of an ensemble of first responders living in Los Angeles and working at Station 118. The series features some high-octane action and emotional drama that has the viewers hooked and invested in the storylines of its many characters. The cast’s stellar performances only amplify the show’s appeal. However, with the show’s fourth season throttling towards the finish line, a key character’s fate is left uncertain.

The forever reliable firefighter, Eddie, is on the deathbed, and it has sparked widespread speculation among the show’s loyal fanbase that actor Ryan Guzman who essays the part, is leaving the series. If you are one of the fans concerned about Eddie’s fate, here’s what we know about it.

What Happened to Eddie on 911?

Edmundo “Eddie” Diaz is one of the main characters on ‘911’ and is first introduced in the season 2 premiere titled ‘Under Pressure.’ He is a firefighter of Swedish and Mexican descent who hails from Texas. Eddie previously worked as a paramedic in the army and served in Afghanistan. He later joins the LAFD and is assigned to Station 118. The firefighter initially struggles to maintain a work-life balance but is relentless in his desire to help others and is extremely hardworking. He slowly rebuilds his relationship with his estranged wife Shannon before her untimely death.

In the third season, Shannon’s death causes Eddie to spiral out, and he turns to underground cage fighting to try and control his anger. He works through his issues with a counselor. In the penultimate episode of season 4, titled ‘Suspicion,’ Eddie helps a child named Charlie, whose mother is intentionally making him sick for attention and money. At the end of the episode, as Buck and Eddie are leaving Charlie’s house, the latter is shot by a sniper.

Ryan Guzman is best known for playing the lead role of Sean Asa in the dance film ‘Step Up Revolution’ and ‘Step Up: All In.’ He has also served as a recurring cast member on the mystery drama series ‘Pretty Little Liars‘ from 2013 to 2014. His other credits include ‘Heroes Reborn’ and the short-lived legal drama ‘Notorious.’ In 2018, Guzman joined the cast of ‘911’ ahead of the second season premiere, playing the role of Eddie. He has been a main cast member since the second season and made a guest appearance on the sister series ‘911: Lone Star’ in 2021.

Unfortunately, fans of the actor will have to wait for a clear answer about Eddie and Guzman’s future on the show. While Guzman hasn’t publicly shown any intention of leaving the series, the recent development regarding his character suggests otherwise. Guzman will appear in the fourth season finale of the series, and Eddie’s fate will be revealed. If Eddie dies, it certainly spells the end of Guzman’s time on the show. It is also entirely possible that even if Eddie survives, he will retire to care for his son, Christopher.

Since Christopher has already lost his mom, Eddie wanting to step away from the risky job to tend to his son makes sense. The third and more fan-favorite possibility is: Eddie survives and returns to action. In a recent interview, Guzmans’s co-star Peter Krause remained tight-lipped about the events of the season 4 finale, leaving Eddie’s future up in the air. While Krause may not have provided any answers, the finale certainly will. ‘911’ has been renewed for a fifth season, and whether Guzman returns for the upcoming season remains to be seen.