Is Eye in the Sky a True Story?

‘Eye in the Sky’ is a thriller film directed by Gavin Hood (‘Official Secrets‘) and written by Guy Hibbert. The movie tells the story of Colonel Katherine Powell (Helen Mirren), who must navigate a moral dilemma that arises in her mission to clean up a terrorist organization. The British film was released in 2015 to positive reception and is dedicated to the memory of actor Alan Rickman (‘Harry Potter‘ film series).

The film deals with the ethical challenges of drone warfare and features numerous allusions to real-world figures and political situations. Does that mean the story is inspired by actual events or true stories? We decided to gather some intel and shed light on the matter. Here’s everything we learned about the inspiration behind ‘Eye in the Sky.’

Is Eye in the Sky Based On a True Story?

No, ‘Eye in the Sky’ is not based on a true story. The film weaves a fictional narrative written by screenwriter Guy Hibbert. In the movie, officials from the British Intelligence are working in tandem with the US Government to organize and execute a drone strike on a site in Nairobi, Kenya, which is housing high-level terrorists who are a target for both countries. However, the situation becomes complicated when a girl enters the house, resulting in an ethical dilemma for the officers in charge of the operation.

Although the particular storyline isn’t based on any single actual event, Hibbert researched various incidents of real-world drone warfare to craft the narrative with a keen focus on the collateral damage when such operations are carried out. In turn, the story allows the film to explore the moral challenges of utilizing drones in warfare. Most of the characters in the movie are fictional entities depicted to be working for real-world organizations such as the terrorist group Al-Shabaab, Royal Marines, Kenyan NIS, etc.

Hibbert stated that he started developing the concept as early as 2008 and wanted to present the reality of drone warfare to the Western audience. The writer also noted that the lack of public debate about the moral implications of using drones and their impact on innocent lives inspired him to write the film. During the research, Hibbert spoke with personnel from the Royal Artillery and also understood the chain of command involved in a drone operation internally referred to as the “kill chain.”

As a result, the film explores the role of military officials and politicians as well as the moral and political input they have on a situation that involves the use of drones to strike at targets. During filming, a couple of drone pilots and British Intelligence Officials also served as advisors to help accurately portray the dynamics of the internal workings during a drone operation. 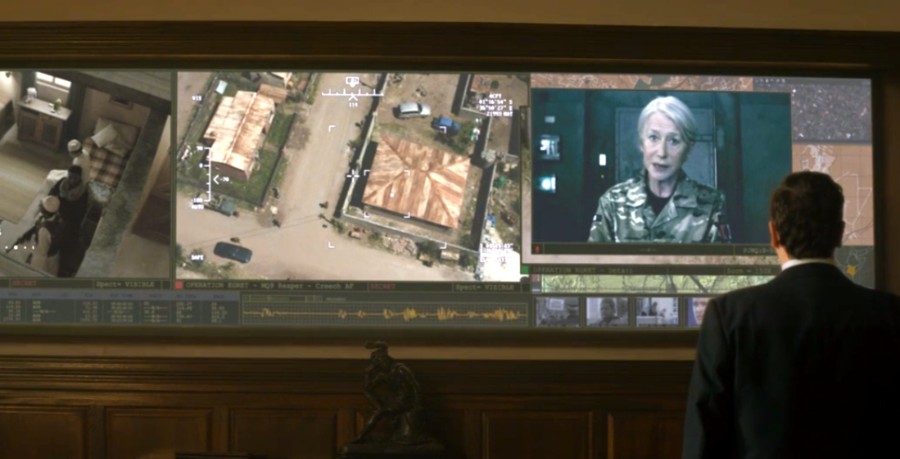 Director Gavin Hood has praised Hibbert’s script for its handling of the subject material and explained the importance of the moral questions that drive the film in an interview with Collider. “At the end of the day, one of the reasons I think this script of Guy’s is so powerful is because he does show the problem or the situation from multiple points of view, including the point of view of the innocent bystander who is affected by the decision to strike,” Hood said.

“Once you do that, you’ve humanized that innocent person as opposed to seeing them as some sort of number. Not only do you humanize them, and therefore encourage anyone involved in this dreadful decision to pause before simply taking a life, but also you realize that if that life is taken, anyone who associated with that life may not feel particularly kindly towards the people who launched that missile,” he further elaborated.

All things said, ‘Eye in the Sky’ is a fictional story that tries to paint a realistic picture of the manner in which drones are utilized in modern warfare and their impact on the lives of innocent civilians. It highlights the urgency of the situation by diving into the ethical aspects of drone warfare and contrasts them with the political benefits. The film soars through beautiful and believable performances that drive home the emotional impact of the sensitive subject material.