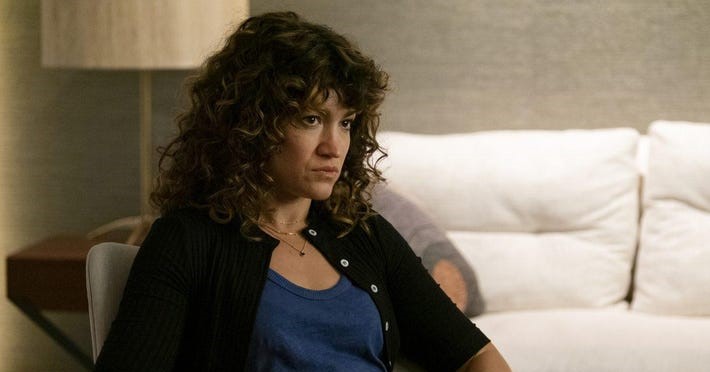 Portrayed by Sarah Stiles, Bonnie Barella is one of the supporting characters of the Showtime drama series ‘Billions.’ She first appears in season 3 episode 9, titled ‘Icebreaker,’ as Bonnie Candela. She joins Axe Capital and quickly establishes herself as one of the core employees of the company, fitting right into the highly competitive atmosphere. Under Bobby Axelrod’s leadership, she thrives, demonstrating what she is capable of time and again. Bobby’s methods require her to be ruthless and highly competent at her job and pursue profit above everything else. She can also be brutally sarcastic and is not necessarily meant to be liked by the audience.

After Mike Prince takes over Axe Capital, Bonnie is one of the employees that decide to remain, but she struggles to adapt to the philosophies of her new boss. Prince and Axe are fundamentally different individuals. Prince is undoubtedly a capitalist, but he sees the good he can do with his wealth. A strong sense of morality serves as the foundation for Prince’s character, which seems to surprise the employees of the hedge fund formerly known as Axe Capital. In season 6 episode 5, titled ‘Rock of Eye,’ Bonnie performs poorly during an evaluation and bears the consequences. She subsequently screams profanities and quits. If you are wondering whether Bonnie is leaving ‘Billions,’ this is what you need to know. SPOILERS AHEAD.

Sarah Stiles’ Bonnie may not always be an important part of the narrative, but she does have a story arc that reaches its zenith during her relationship with “Dollar” Bill. Their brash and explosive personalities create a perfect mixture of hilarity and drama. On the day Prince took over, “Dollar” Bill left the company with Mafee, and it hasn’t been the same since then. Bonnie gradually realizes that she doesn’t fit into Mike Prince’s framework. The tipping point comes when Prince halves her number of clients for trading against others in the company instead of for herself and puts Wags in charge of her trades. Bonnie declares that if she needed team spirit, she would have worked at a restaurant chain and walks out.

Sarah Stiles is an American singer and actress who has worked in a number of stage productions, including the Broadway productions of ‘Avenue Q,’ ‘On a Clear Day You Can See Forever,’ and ‘Tootsie.’ She was cast as Gladys in Epix’s comedy-drama series ‘Get Shorty.’ Stiles made her big-screen debut in Steven Soderbergh’s 2018 horror-drama film ‘Unsane.’

In a 2020 interview, Stiles praised her co-stars and described how she got the role. “I love Billions,” she said. “Those are honestly some of my best buddies in my life. Those people I work with are just great. It’s such a different role than I’ve ever played before. Bonnie is such a tough hard-[expletive]. She just puts everybody in their place and it’s really fun to play her. I auditioned for it and I was actually shooting Get Shorty at the same time. I was flying back and forth because Billions shoots in New York, but I was never actually living in New York for the first two seasons I was on. It was a crazy time and they kept writing for me and kept having me on.”

Most sources indicate that she will not appear in any more episodes after ‘Rock of Eye’ in season 6. In contrast, some of her co-stars, including Daniel K. Isaac (who portrays Ben Kim), have received credits for the rest of the seasons. So, there is a considerable possibility that episode 5 marks her last appearance in ‘Billions,’ at least for season 6. Stiles can always return to the show in future seasons.