Is [Spoiler] Dead in Dexter: New Blood? Why Did Dexter Kill Him? 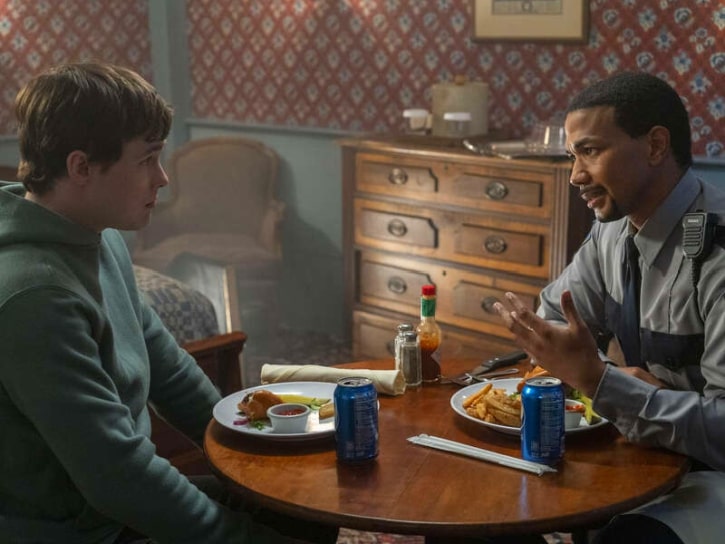 Sergeant Logan (Alano Miller) is one of the supporting characters of ‘Dexter: New Blood.’ He is filled to the brim with small-town charm, hiding his extremely competent police officer self behind a kind and approachable smile. It’s pretty apparent that Logan has romantic feelings for Angela, his boss, and he initially even appears to be a competitor of Dexter.

However, the series moves on from that aspect of the narrative and uses him to establish Molly, a true-crime podcaster who comes to Iron Lake looking for a story after a wealthy young man named Matt Caldwell goes missing. Dexter and Logan have a very amicable relationship for most of the series. But in the final episode, it takes a turn for the worse. If you are wondering whether Logan dies in ‘Dexter: New Blood,’ we got you covered.

Yes, Logan is dead. In the finale, titled ‘Sins of the Father,’ Angela and Logan arrest Dexter for the murder of Matt Caldwell. They bring him to the station, and Angela interrogates him. But she knows that none of the evidence she has will hold up in court. She contacts Angel Batista and discovers that she isn’t the only person who has thought that Dexter is the Bay Harbor Butcher. Upon learning that Dexter is alive, Angel tells the Iron Lake police chief that he is coming to her town. When Angela speaks to Dexter about this, the latter realizes that he doesn’t have that many choices. He reveals to Angela the truth about Kurt and the girls she has been looking for all these years. Dexter even gives her the location of Kurt’s underground bunker.

As Angela leaves, Dexter asks for water from Logan. Earlier, when Dexter told Angela about Kurt, the camera was off. So, predictably, Logan’s interest is piqued about what exactly Dexter said that prompted Angela to leave in such haste. As he comes closer to give the water bottle, Dexter grabs Logan. He asks the other man to stop struggling and free him. But when Logan reaches for his gun, Dexter ends up killing him.

Why Did Dexter Kill Logan?

After a decade-long hiatus from killing, Dexter has become sloppy. And that becomes abundantly clear through the mistakes he makes in the revival series. He kills Logan out of sheer desperation. He knows that Angel Batista is coming to Iron Lake, and when he does, it will all be over. So, he decides to take the small window of opportunity he has created for himself by sending Angela away and escapes. He initially doesn’t intend to kill Logan but is ultimately left with no other choice.

Logan’s death virtually seals Dexter’s fate. It shows Harrison that his father can kill innocent people if it means saving their own lives. After all, the first rule of the code is not to get caught. It’s interesting that the moment Dexter kills a truly innocent man, he becomes just another killer, and his own son takes him out.

Read More: Is Dexter Dead or Alive at the End of Dexter: New Blood?