Is Stillwater a True Story?

‘Stillwater’ is a crime drama film directed by Tom McCarthy that stars Matt Damon in the lead role of Bill Baker, an average working-class American from Stillwater, Oklahoma, who faces a multitude of challenges to clear his daughter Allison’s name from a murder charge. Allison, who is studying in Marseille, France, has been arrested under the charges of murdering her friend, Lina.

Bill struggles to exonerate his daughter in a faraway land, with cultural differences and no knowledge of the language or the legal system. The film’s premise is one that sounds like a sensational newspaper headline. However, is that really the case? Is ‘Stillwater’ inspired by any real events or true stories? We decided to take a look into the matter, and here’s everything we learned about the inspiration behind the movie.

Is Stillwater Based on a True Story?

‘Stillwater’ is partially based on a true story. Director Tom McCarthy spoke in an interview with The OC Register and said that the movie is very loosely based on the story of Amanda Knox. However, McCarthy has insisted that the movie bears little to no resemblance to Amanda’s story beyond the basic premise. “I was riveted by that case, and there was (some) inspiration there, but if you put too much emphasis on that, it’s not accurate. This is obviously a very different scenario,” McCarthy said in the interview. 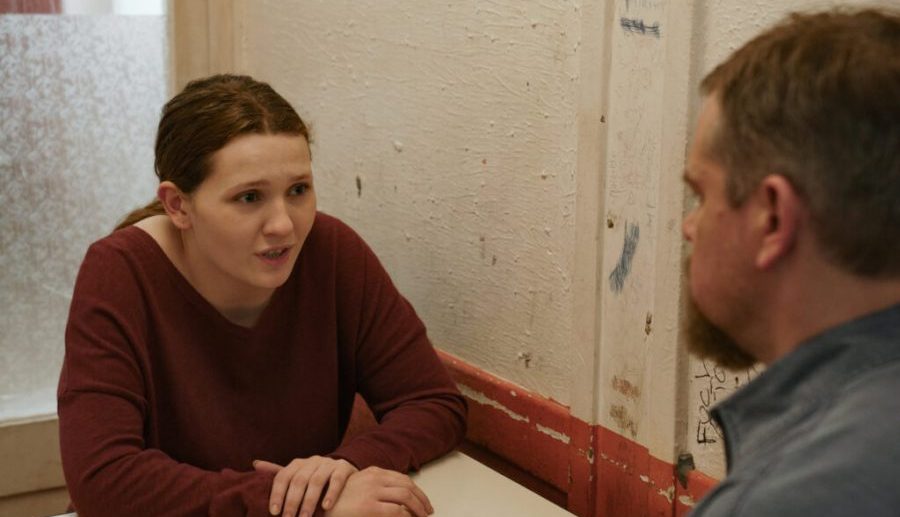 Similarly, in a separate interview, the director revealed that he began working on the film’s story nearly ten years ago. Although Amanda’s story enamored McCarthy, he did not wish to tackle a true-crime story and instead developed a fictional story with a father-daughter relationship at the heart of it.

The aforementioned Amanda Knox hails from Seattle, Washington, and was a linguistic student at the University of Washington. At the age of 20, she spent a year studying in Perugia, Italy. There she shared an apartment with Meredith Kercher, an exchange student from England (and two Italian trainee lawyers). In November 2007, Kercher’s dead body was found o her bedroom floor, and Knox was arrested under the charges of her murder. Knox was initially convicted of the crime but was later released in 2011 and completely exonerated in 2015.

The body of the movie is partially similar to Amanda’s story but also features some notable changes. Firstly, in the movie, there is a romantic angle between Allison and her roommate, who is murdered. Allison hails from Stillwater, Oklahoma, and studies in Marseille, France, a stark departure from Amanda’s background. The film’s focus on the father-daughter relationship serves as the story’s soul, and the roughneck father’s character adds a whole different perspective to the daughter’s plight. The movie heavily delves into the Oklahoma culture that gives the narrative a unique voice.

The director also makes some poignant statements about the current political climate through the movie and explores the concept of nationalism while simultaneously inverting the American hero trope commonly seen in Hollywood films. “Globally, there’s been this move towards nationalism, which I think some people would pin on the Trump administration and a couple (of) other administrations around the world right now that are pretty prominent, a couple (of) other countries specifically, and the idea of like what that means globally,” McCarthy said explaining the movie’s political theme while speaking to Deadline.

Therefore, all things considered, it is safe to say that the movie’s story is more fictional than based on a true story. Although the narrative’s genesis is rooted in a real incident, the movie also draws a sense of realism through the exploration of a father-daughter relationship, Oklahoma culture, and the current socio-political climate. These elements help the film create its own identity and make it deviate cinematically, emotionally, and morally from the real incident that it is loosely inspired by.

UPDATE: In a long Twitter thread posted today, Amanda Knox made it absolutely clear that the filmmakers didn’t approach her before or during the making of the film. You can check out her Twitter thread below:

Does my name belong to me? My face? What about my life? My story? Why does my name refer to events I had no hand in? I return to these questions because others continue to profit off my name, face, & story without my consent. Most recently, the film #STILLWATER.