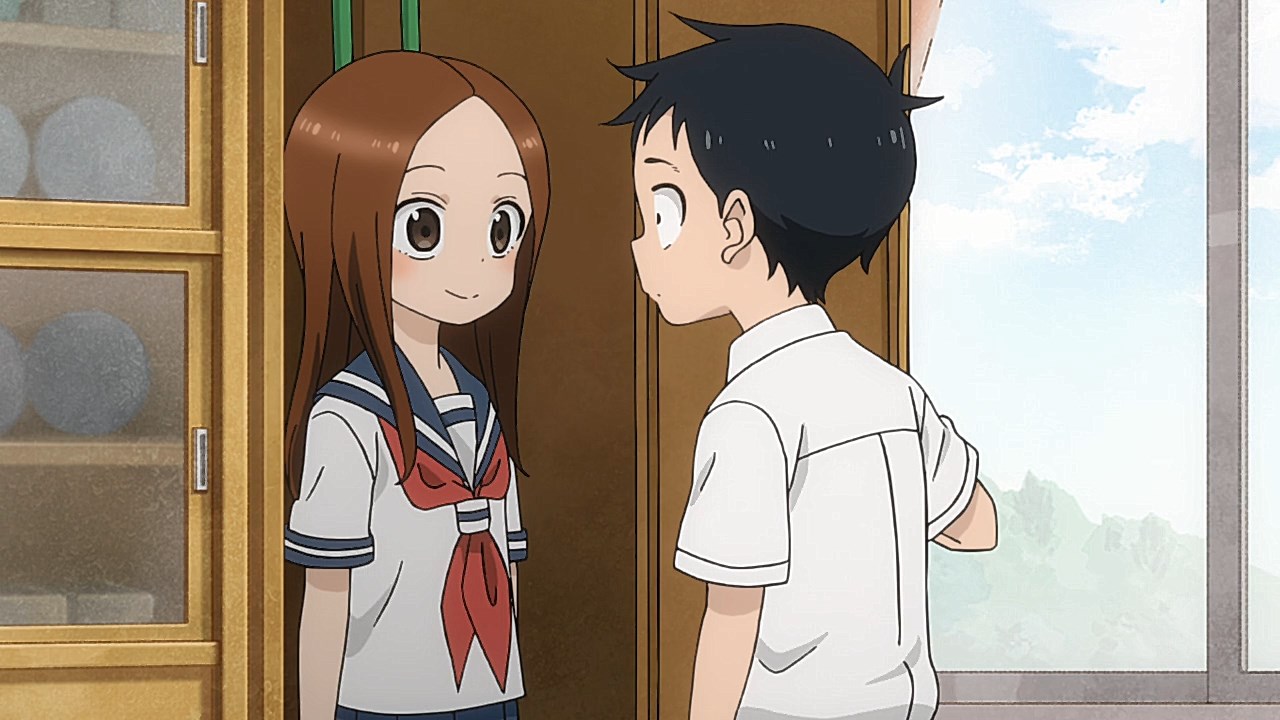 Back in school, we have all been infatuated with someone; we’ve all had deep feelings for a crush; and we have also been in relationships. ‘Karakai Jouzu no Takagi-san’ will take you back to those good old days when romantic endeavors manifested on a grand scale and would often leave you with butterflies fluttering in your stomach. With a rather simple storyline, the anime is driven by the intricacies of the relationship between the two main characters. As the chemistry between the two characters develops, the plot takes a more serious tone that grips you more than any other romance anime shows out there. Instead of focusing on the common ground between the two characters, the anime lays emphasis on their extreme differences and shows how being opposites just heightens the couple’s feelings for one another.

Apart from the two main characters, there are also three other secondary characters who seem to have no significance with respect to the overarching plot. This is probably the only pitfall of the anime as the involvement of these characters simply draws you away from the engaging main plot.

The show, though, undoubtedly succeeds with its depiction of the incredible chemistry between its characters, and even the comedy side of it is surprisingly good, packed with some hilarious moments. The visuals of the show are simple yet effective and are easily able to convey its all-encompassing “slice of life” feels. Overall, the story of ‘Karakai Jouzu no Takagi-san’ might seem a little dry in the beginning, but as soon as the characters and their relationships start to grow on you, you can’t help but admire everything that this beautiful romance anime has to offer. If you’re tired of all those typical Shoujo anime and are looking for something new, then you should definitely give this one a shot.

Karakai Jouzu no Takagi-san Season 3 Release Date: When will it premiere?

The anime series has been adapted from a manga that has a total of 11 volumes to date. Considering that the recent version of the manga was published on July 4, 2019, which was just a few days before the premiere of Season 2, we can safely say that one entire volume of the source material has not been covered in the second season.

Also, looking at the rate at which the mangaka has been creating content, there will probably be a few more volumes by the end of 2019. If we look at the popularity of the anime, it still hasn’t really caught up with the top tier anime shows of the year, but from its rating on most popular anime platforms, one can tell that it is being well received by those who are giving it a shot. It’s probably a bit too soon to make any sort of claims but it looks like the anime has a strong chance of getting renewed if the author of its source material is willing to continue the Manga series.

If the author manages to consistently publish relevant content, then ‘Karakai Jouzu no Takagi-san’ Season 3 can be expected to release sometime in December 2020 or later.

The English Dub of ‘Karakai Jouzu no Takagi-san’ is available on Funimation and Netflix.

We all have that one friend who pretty much knows everything about us. Nishikata is an ordinary school going kid who has one such friend. But to his dismay, having a friend like that is more of a curse than a blessing. Takagi is his classmate who knows him so well that every time she teases him, he is not able to think of a single comeback. After knowing him for years now, Takagi knows exactly how he’ll react if she teases him in a certain way. But Nishikata swears that he’ll make a good comeback someday and all of his sufferings will finally come to an end. ‘Karakai Jouzu no Takagi-san’ follows the playful and cute story of these two young teenagers who discover the true meaning of friendship through their gags and goofy antics.

The character descriptions below contain several spoilers. So if you haven’t read the manga, you shouldn’t be reading any further.

Nishikata is the male protagonist of the series who is in middle school and is constantly teased by his childhood friend Takagi. In the future, he ends up marrying Takagi and also has a child with her. In appearance, he is an average looking boy who is slightly timid for his age. He has big eyes but his black pupils are relatively much smaller. He has black messy hair and tiny thin eyebrows that are barely noticeable. He is usually seen with a white button-down shirt that covers his white-green t-shirt along with navy blue pants. Pretty much every day at school, Takagi teases him and he ends up feeling embarrassed way too quickly. He also feels extremely shy when Takagi abruptly brings up topics related to love and relationships. Despite being teased every single day, he never really gives up and tries to make solid comebacks at Takagi just to make her feel how he feels. Later, every single time Takagi teases him, he drops down and does 10 push-ups.

Nishikata is a rather anxious and jumpy boy who overthinks every single thing he does. He often thinks about what his friends, family members or teachers would say about his actions and this thought gets him all nervous. He also deeply cares for the few people who are really close to him. Though he gets all frightened by the idea of exams, he is still able to perform fairly well in school. He is also very expressive and this just makes things easier for Takagi. She is able to read all of his expressions and this allows her to understand what truly bothers him. Even after being teased all the time, Nishikata really cares for Takagi and considers her to be his best friend. The two of them get along really well and almost every day, they walk back home from school together.

Takagi is the main female protagonist of the show who constantly teases Nishikata and secretly also has a huge crush on him. Unlike Nishikata, she is intelligent, carefree, fearless and does not depend on anybody else. 10 years in the future, she is portrayed as a very responsible young lady who carefully balances her professional life with her personal life as the mother of her infant daughter. Takagi is a cute young girl who has long straight brown hair with big brown eyes and rosy cheeks. She is a very kind-hearted girl who loves to fool around and have fun with her best friend Nishikata. Though she teases him all the time, she deeply cares for him and also develops feelings for him, which she is able to hide rather easily. She is not much of a competitive person, but every time Nishikata tries to challenge her, she uses her intelligence and easily wins.

She is able to read Nishikata’s mind and is able to predict all of his actions. This always allows her to stay one step ahead of him at all times. She also has a lot of control over her emotions and is really good at hiding her feelings of fear even when she’s extremely nervous. Though she’s always calm and composed, she loses her cool when Nishikata ends up saying something too extreme. When it comes to her past, nothing much is revealed about her background; but judging by her maturity and confidence, she seems to be from a pretty good family.