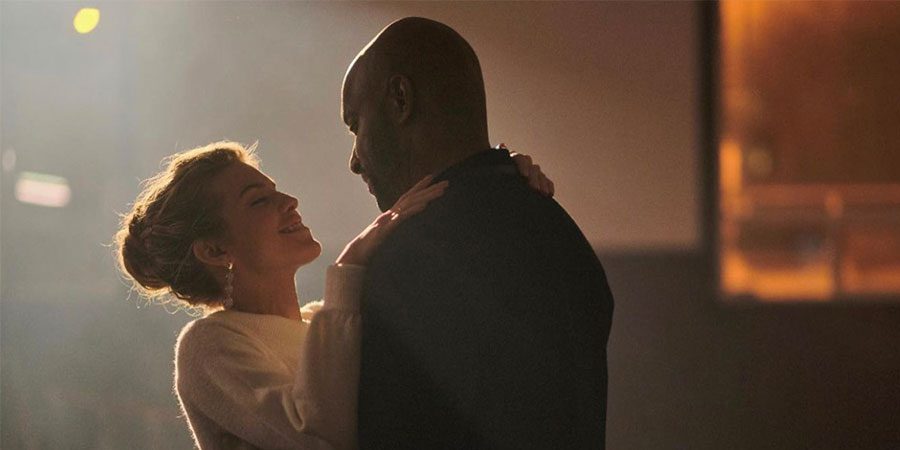 What better way to celebrate the festive season than the promise of family and togetherness? Directed by Paul Shapiro, ‘Dancing Through the Snow’ is a joyous and feel-good romantic comedy Lifetime Christmas movie as part of the channel’s ‘It’s A Wonderful Lifetime’ program. The story revolves around father Michael and daughter Lily, whose ballet duet routine goes viral. As a consequence, single father Michael becomes the most eligible bachelor, with women swooning over him.

However, Michael already has set his eyes on Olivia, Lily’s dance teacher. Will Michael and Olivia spark off this festive season with new hope, or will heavy snow jeopardize Michael’s dance? This interracial romance is brought to life by a star-studded cast, while the festive small-town setting lends it a ubiquitous charm. However, you may want to know whether the story was based on an actual event. Or else, you may be curious about the filming locations and want to be acquainted with the cast members. Well, let us spill all the beans!

Dancing Through the Snow Filming Locations

‘Dancing Through the Snow’ was presumably filmed in Canada, especially in British Columbia. Not much information is available regarding the specifics of filming. Still, it seems that the movie was filmed in the region since many of the cast and crew members involved in the production are from British Columbia. Let’s take a look at the production details of this romantic drama film!

Although Lifetime movies are usually filmed in Los Angeles, over the years, a lot of productions from the network have found greener pastures up North, especially in British Columbia. It remains a hotspot for rival telefilm producers like Hallmark Channel. Due to the easing of finances, several Lifetime productions have also made the leap. Therefore, it is highly likely that the production team of ‘Dancing Through the Snow’ chose the westernmost province of Canada as a filming location.

Dancing Through the Snow Cast

Colin Lawrence essays the role of Michael Foster, a single father and veteran firefighter out for love. He is best known for his performances in ‘Virgin River’ and ‘Riverdale.’ You may have also seen him in lauded films like ‘Watchmen’ and ‘The 6th Day.’ On the other hand, AnnaLynne McCord takes up the role of Olivia, the love interest of Michael and the dance teacher of Michael’s daughter. She is recognized for her performance as Naomi Clark in ‘90210’ and Eden Lord in ‘Nip/Tuck.’

Is Dancing Through the Snow Based on A True Story?

Yes, ‘Dancing In The Snow’ is based on a true story. Paul Shapiro directed the movie from a screenplay penned by Adam Rockoff. The screenwriter wrote the tale following a video that went viral a few years ago. Like the one that sparks off the movie, the actual video was about an adorable dad doing a ballet recital with his daughter. While the video has disappeared in the fringes of the internet, actress AnnaLynne McCord, who dons the garb of Olivia in the movie, appeared on Tampa Bay-based media channel WFLA-TV to attest to the fact.

The dynamic between the cast ensemble also comes off as quite natural, as does Michael’s dilemma between honoring the memory of his late wife and moving on with his life. The father-daughter duo in the movie, we come to sense, is palpable. Bianca Lawrence, who appears as Lily in the film, is Colin Lawrence’s real-life daughter, and the veteran actor could not be more grateful to be able to team up with his daughter. Therefore, ‘Dancing Through the Snow’ blends the real and the reel quite well.