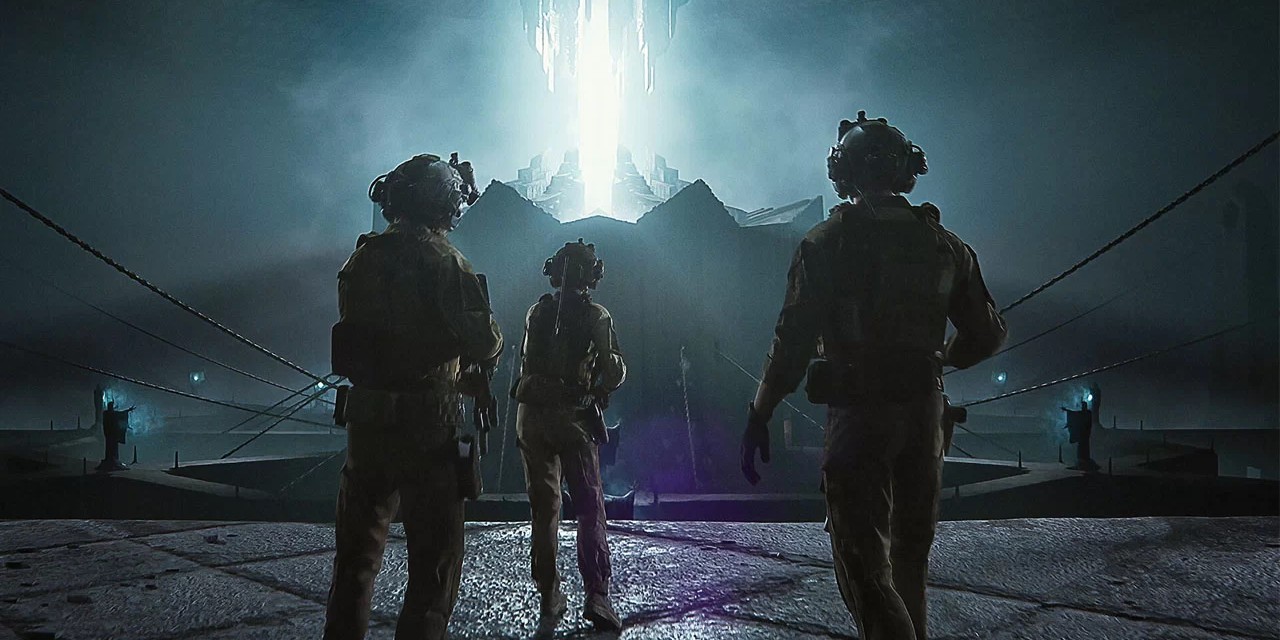 ‘Love, Death & Robots‘ season 3 tackles the military thriller genre in its eighth episode. However, as with most stories in the anthology series, the entry utilizes some science-fiction elements to sketch out some broader themes. The episode titled, ‘In Vaulted Halls Entombed,’ is directed by Jerome Chen and based on a short story written by Alex Baxter.

It follows a Special Forces team as they track down a group of hostages in a mysterious cave. What unfolds is a horrifying experience that leads to a close encounter of the third kind. The episode ends on a shocking cliffhanger that will leave viewers scrambling for an explanation. If you seek a definitive answer about the ending of ‘Love, Death & Robots’ season 3 episode 8, here is everything you need to know! SPOILERS AHEAD!

Episode 8, titled ‘In Vaulted Halls Entombed,’ opens with a Special Forces unit tracking down a group of hostages in the middle of rocky terrain. The hostages are led into a cave by their captors, presumably some terrorists. The Sargent in charge of the unit, Coulthard, instructs his team members to quietly pursue the hostages. As the unit enters the cave, they share light banter to calm their nerves. However, the moment of humor serves as a foreshadowing of the truly horrific events about to unfold.

While navigating the cave, Harper, one of the soldiers on the crew, discovers a gooey substance on the walls. The unit then finds a decomposing dead body of a soldier lying in their path. Just then, the group is attacked by a swarm of cockroach-like alien creatures. The soldiers try to retaliate but are overwhelmed by the number of creatures. The creatures eat the soldiers while only Coulthard, Harper, and Spencer survive. As the survivors search for the attempt and try to finish the mission despite the setbacks, they come across the tomb of a god.

Soon, the trio realizes that their mission is doomed and that there are forces greater than they imagined at play. Hence, the trio attempts to leave the cave. However, another swarm of aliens attacks the trio. Spencer fends off the aliens allowing Coulthard and Harper to escape. The duo return to the tomb and contemplate their situation. However, before they can formulate a plan, the soldiers are alarmed by the voice of an alien creature residing within the hollow depts of the cave. The creature lures the soldiers towards itself in a bid to free itself from captivity.

Coulthard and Harper encounter a mysterious alien creature inside the crypts towards the episode’s end. The alien appears to be an Eldritch God ripped straight out of the workers of H.P. Lovecraft. The alien quickly demonstrates its powers and starts to mind control the soldiers. While Harper succeeds in resisting, she sees visions of the alien destroying the earth. On the other hand, Coulthard falls prey to the creature’s mind control and attempts to free the alien. Harper tries to stop her superior, and the two end up in a physical altercation.

Harper likely realizes the alien controls humans after making eye contact with its prey. Thus, they become vulnerable in front of the creature’s power and obey its commands. The process also explains why the alien has a God-like standing in the crypts. However, it is also evident that the monstrous alien could spell doom for the earth and is rightfully caged. Therefore, Harper must fight to fend off the creature’s attempts to mind control her and free itself. Ultimately, Harper succeeds in doing so by carving out her eyes and ending the chances of the alien controlling her. In the end, Harper keeps the alien caged inside the depths of the caves and returns to the outside world, having suffered an incredibly tragic fate.