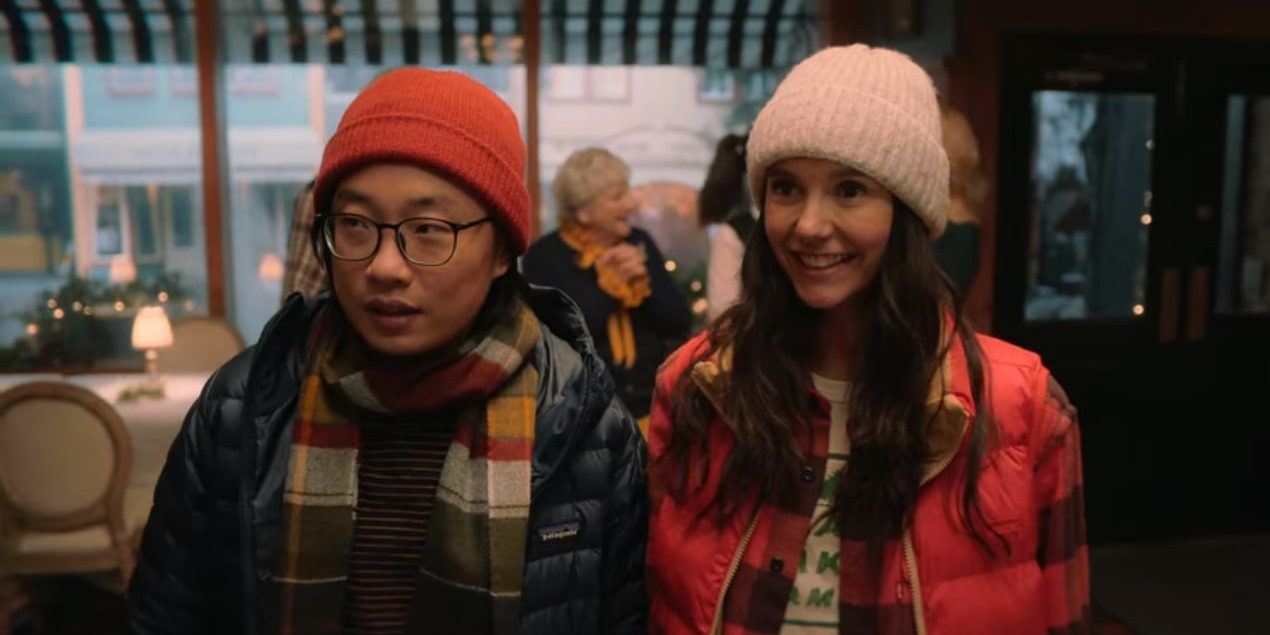 Festive seasons give us a perfect romantic backdrop for budding love. It is in the air; you would have to catch it – they would say. However, this catching business gets trickier by the day, in an age where dating apps and instant gratification divert our attention from ourselves. And let us not begin about the horde of catfishes out there. Hernán Jiménez manageably packs all the perils of modern dating in the tour-de-force romantic comedy ‘Love Hard.’

You know there are movies where the “comedy” part is casually conjoined with the “romantic” only to make it sound more appetizing? Well, this compassionate and rib-tickling affair does not catfish in either department. Actress-musician Nina Dobrev delivers a naturally funny performance as Natalie, a disaster dating blogger who falls into the trap laid by a catfish while searching for her next story. The finale is almost devastating, but a happy conclusion and the promise of a more joyful beginning keep the drama buoyant. Let us dissect the denouement further. SPOILERS AHEAD.

Natalie is without luck. Her date matches on the app Flirt Alert almost always end up being disastrous – if the guy does not turn out to be 20 years older than the pictures, he probably has a wife. However, Natalie has made a career out of her miserable dates. She runs a column in Soash Media, where she chronicles her horrible love life. She is on the lookout for her new disaster romance.

After ignoring some profiles, she stumbles upon Josh, a cute guy with a sharp jawline whose favorite Christmas movie happens to be ‘Love Actually.’ Natalie’s choice is ‘Die Hard .’ Upon probing from Josh, she defends her choice with seven points. The conversation grows into liking, Josh and Natalie are on the phone all the time, and Josh has even read Natalie’s favorite childhood poetry book, ‘Where the Sidewalk Ends’ (by Shel Silverstein).

To co-worker Kerry, Natalie confides that she may be on to something, and this may turn out to be a happy conjecture. Natalie’s boss Lee thinks otherwise, however. Natalie plans to fly across the country from LA to Lake Placid, and Lee warns her that it can end up becoming her most extraordinary disaster date yet. Lo and behold, Josh turns out to be a catfish, while Natalie discovers Tag, the person in Josh’s photos. While Natalie acts as Josh’s girlfriend, Josh promises to hook Natalie up with Tag by New Years’ eve. However, things don’t go according to plan.

Love Hard Ending: Who Does Natalie End Up With?

Natalie’s tour to Lake Placid has an ominous beginning. Natalie’s bag is missing in transit, and there is only one cab driver in the whole town. The driver, an ex-convict (which we get to know of later), has a seat broken, but he offers free snacks. Natalie’s destination is the Lin household at 420 Holt Street. Josh Lin turns out to be a catfish, and he only apparently did it because his accurate profile was not giving him a lot of matches.

But that is beside the point. Mad at Josh, Natalie goes to a karaoke bar in town, where she finds Tag, the person in Josh’s photos. She hopes to impress Josh with Nina Dobrev’s own “I’d Do Anything for Love.” Josh seems to love the song, but in the meantime, Natalie’s face has swollen up beyond recognition, and she passes out on the snow.

The shots that she took earlier probably had Kiwi, the one fruit she is allergic to. However, Josh takes her to the local vet clinic (the only clinic nearby, the nearest hospital being 30 minutes away), and Natalie returns to her original form. Josh proposes to arrange a tryst between Natalie and Tag, but she has to act as his girlfriend till Christmas. Natalie is pressed for time, but she agrees to Josh’s plan.

With some encouragement from Josh, Natalie has a stint at mountain climbing. Natalie does not like mountain climbing, and she despises Tag’s favorite book ‘Walden.’ She almost faints from vertigo, but Josh climbs up and helps her get down. Josh turns out to be quite a nice person but not very trustworthy. He enjoys making candles that evoke memory through scents, but he is embarrassed to acknowledge his hobbies.

He has a distorted idea of masculinity in his head, which his family apparently ingrains. Josh’s brother Owen is a show-off, and when Josh and Natalie’s duo steal some spotlight from the Lin family carol with their angelic performance, Owen steals the moment to announce his wife Chelsea’s pregnancy. Following the advice given to him by Natalie, Josh attempts to one-up Owen and asks for Natalie’s hand in marriage.

In the spur of the moment, Natalie says yes to Josh, but she is furious. Josh acknowledges that he got a bit carried away while assuring Natalie that the pact still stands in place. When Josh argues that everything about him is real apart from the FlirtAlert photos, Natalie dismisses him as fiction. She goes out on a bobsledding date with Tag, and scared out of her wits, she puts the joint to use passed on to her by the cab driver.

In the meantime, Josh’s family arranges for a pre-wedding party, and it is too much for Natalie to take. To make things worse, Tag is present in the venue, as is Lee. They attempt to control the damage for a while, but Josh bails out shortly after. At the boiling point, Natalie divulges everything in a brief speech.

She flees to the airport after leaving a memo for Josh, but the flights are canceled. She ends up in the local lodge where Lee is staying, and after some moral boost from Lee, Natalie makes a tour back to the Lin household, where she proposes to Josh. With “Curls” by Bibio playing in the background, she proposes to Josh in a proper ‘Love Actually’ style. The couple kisses, and as the voice of Natalie playing in the background suggest, it is the beginning of their love.

What Happens to Tag?

Tag is an adrenaline-seeking guy who likes mountaineering, hiking, and bobsledding. He was popular in school, and he is excellent with the ladies, as Josh firmly establishes. Once best friends, Josh and Tag fell apart after Tag became popular. His favorite book is ‘Walden’ by Thoreau, and it is one he re-reads every year. Natalie thinks Thoreau to be emotionless and hypocritical, she has vertigo, and she is not a very outdoorsy person.

Therefore, it is established at the outset that Natalie and Tag would make a horrible pair. Although Natalie has a distaste for the things Tag likes, she conceals her natural preferences while trying to impress Tag. Therefore, when Tag calls her out at the party for being a catfish herself, Natalie does not have a reply. Presumably, Tag makes Natalie feel guilty that she has done the same things that led her to dismiss Josh’s identity.

Therefore, although a minor character, Tag’s involvement is crucial in Natalie’s final epiphany. Despite what Josh says, Tag comes off as a moderately sociable loner not easy with emotions. Tag is last seen walking out of the party. He is probably on a camping trip with his favorite companion, ‘Walden.’