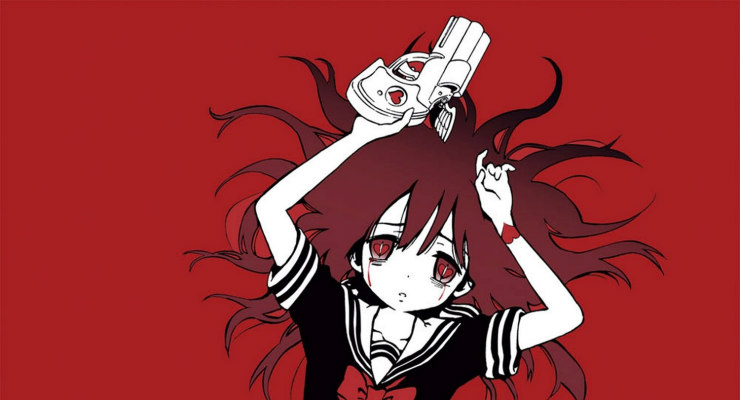 ‘Mahou Shoujo Site’ starts off on a very serious tone but it completely contradicts that by showing some next level absurdity. Don’t get me wrong here as it’s this intentional absurdity that makes its positive morals a lot more significant. An example of its contradictory imagery is the portrayal of the main character committing suicide in the opening theme who points a gun at her head and then suddenly vanishes after she pulls the trigger. But in the anime, she uses this gun to teleport her allies to different places. There are several similar negative suicidal references that have been given a whole new ridiculously positive meaning.

Being a spin-off of the main ‘Magical Shoujo‘ series, this one is more or less of a repetition of a much darker story. So this version will only be enjoyable for someone who is not at all familiar with the original story. And even its edgy imagery can be a little off-putting for someone who is new to the world of anime. But for others, ‘Mahou Shoujo Site’ can be quite an enjoyable anime if its contradictions are taken lightly and its moral backing is well understood.

Mahou Shoujo Site Season 2 Release Date: When will it premiere?

‘Mahou Shoujo Site’ season 1 premiered on April 7, 2018 and with a total of 12 episodes, it came to an end on June 23, 2018. In a very short span, the anime has now become one of the most renowned names in the “moe psychological” genre. This weird combination of its cutesy external appeal along with its dark and disturbing themes has caught the attention of many anime viewers. While the ones who have only seen the anime are hoping for a new season, the ones who have read the manga are saying that it’s better to go read the manga instead. There is this mild rift in the opinions of the manga and anime fans because of the difference in the ending of the two.

The manga has a very conclusive ending whereas the anime has its own non-conclusive original end. Since the anime has completely drifted away from the story of the manga by the end of season 1, it seems very less likely that it will return for a new season. But then again, the open ending of the anime is certainly a green flag for its renewal. So as of now, it is hard to determine whether or not the anime will receive a sequel. Hopefully, there will be some confirmed news regarding ‘Mahou Shoujo Site’ season 2 release date by end of 2019 and as soon as that happens, we will update it here in this section.

Unfortunately, a legit English Dub of ‘Mahou Shoujo Site’ has not been released yet. But you can still stream the anime with its original Japanese audio and English subtitles on Amazon Prime.

‘Mahou Shoujo Site’ revolves around the life of a high school girl named Aya Asagari who contemplates suicide every single day. After being bullied at school, she returns home to a brother who relieves all of his academic stress by relentlessly physically abusing her.

Just like every other night, she lies awake on her bed wishing she was dead when suddenly, a website called the ‘Mahou Shoujo Site’ appears on her laptop screen. The website claims that it can offer her magical powers but she just dismisses it by convincing herself that it’s a prank of some sort. The next day she discovers a magical gun in her shoe locker and though still a little skeptic about all of it, she decides to carry the gun with her. Soon, she runs into her bullies again and that’s when, out of desperation, she decides to use the gun. This is when all of her assailants are magically transported to railroad nearby and get run over by a train.

Unable to digest the fact that she just murdered her classmates by using magic, she tries to stay calm by understanding what exactly happened. Soon after this, she runs into another one of her classmates, Tsuyuno Yatsumura, who can use magic to freeze time. The two realize that fate has not only brought them together to fight other magical girls, but also to uncover the truth behind the strange website and also to save the world from an upcoming apocalyptic event known as ‘The Tempest’.

Aya Asagiri is a young girl who hates her life because she gets brutally bullied at school every day. After going through all of this, when she comes back home, she is again physically abused by her own brother who strips her and beats her just to soothe his own mental pain. Every minute of her life, she thinks of just ending her miserable life but all of this changes one day when a website called “Mahou Shoujo Site” pops up in her laptop. Following this incident, just like every other day, she runs into her bullies all over again at school. But this time around, things go a little differently than usual.

Tsuyuno and Aya have a lot in common. Both of them have acquired magical powers and have gone through a very rough past which has now forced them to be quite withdrawn from the world around them. Tsuyuno has the ability to freeze time and unlike Aya, she has full control over her magical ability. She has short blond hair and walks around with a very cold expression on her face. But after spending some time with Aya, she starts to open up a little and also becomes a little less cold towards others.

Just like Aya, Rina was also bullied during her school days and it had all reached a point where she was on the verge of hanging herself. This is when the same website had appeared on her desktop as well and had given her the ability to mimic the appearance of others. In the present events of the show, she is known to be a vicious killer who is famous all over Japan. Over the years, she has acquired several magical sticks and has been able to use them to kill all those who came in her way.

Sarina is one of Aya’s bullies who later tries to seek revenge for the death of her friend. She tries to victimize herself by claiming that she wants to kill Aya only out of self-defense but deep inside, it is her guilt of bullying that drives her to become explosively vengeful and hypocritical. But much later in the series, after being deeply touched by Aya’s kindness, she develops a soft spot towards her and even tries to save her life by putting herself in danger.