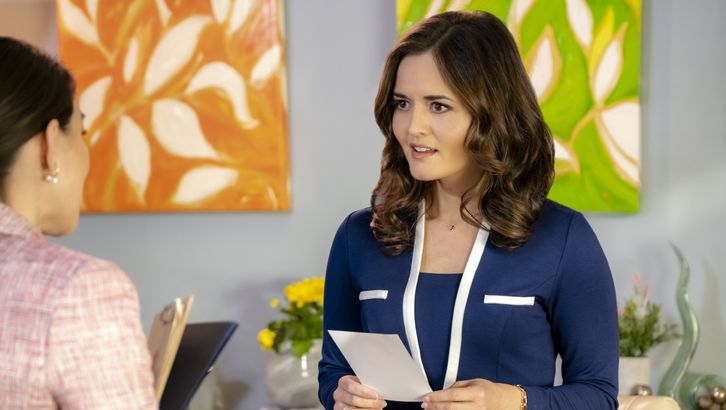 If you are in the mood for a good mystery movie to occupy your mind, look no further. Hallmark’s ‘Matchmaker Mysteries’ series is back with a new television movie titled ‘A Fatal Romance.’ The premise follows a romance writer who is murdered. Matchmaker Angie Dove gets involved and crosses paths with Detective Kyle Carter. The two have to read between the lines to solve the murder.

In the story, we meet Angie as she’s preparing to moderate a writer’s panel at a romance convention. She runs into her old boyfriend, Ethan Plume, who’s taken over his family’s publishing business. However, when Beatrice Penn, a bestselling author, is found dead, Plume becomes the prime suspect. Angie is unwilling to believe Plume’s guilt and launches her investigation. She also crosses paths with Kyle again, and sparks start flying. However, Angie’s determination to seek the truth puts her in harm’s way.

The mystery is accentuated by the location where the story unfurls. Curious to know where ‘Matchmaker Mysteries: A Fatal Romance’ is filmed? We have got you covered. Besides, we will also walk you through the cast.

‘Matchmaker Mysteries: A Fatal Romance’ has been filmed in British Columbia, Canada. Quite a fair bit of the movie has been filmed in Vancouver and Maple Ridge. Several projects are shot in and around British Columbia because of the tax incentives. Moreover, the landscape offers stunning views that make for a visually rich project. The cherry on the cake is the presence of trained professionals who can help in the post-production process.

You can check out two posts below, from a castmember, showing the locations where ‘Matchmaker Mysteries: A Fatal Romance’ has been filmed.

As is evident, the cast member seems excited at working with a dog who she shared screen-time with, in an earlier project. We see that the dog appeared on set in Maple Ridge, while the new ‘Matchmaker Mysteries’ movie was being filmed.

It is hard balancing the life of an actor while being a mother. You can see the castmember’s joy when her son visits her on set in Vancouver. There are a few other pictures while filming in Vancouver that you can check out below.

The main cast members are Victor Webster and Danica McKellar, who appear as Kyle and Angie, respectively.

Victor was born in Calgary, Alberta. He did not start with a career in acting. Instead, Victor was a stockbroker and owned and operated an import/export company. He only transitioned to acting after he moved to Los Angeles in 1998. Victor made his television debut with ‘Days of Our Lives,’ but has notable appearances in shows like ‘Castle’ and ‘Criminal Minds’ as well.

Acting is not his only passion, as Webster intensely follows photography and martial arts as well. He also enjoys the distinction of being on People magazine’s “50 Most Eligible Bachelors” list. You can check out his post, urging viewers to watch the latest ‘Matchmaker Mysteries’ movie.

Danica McKellar is doubly invested in the Hallmark movie since she executive produces the series of ‘Matchmaker Mysteries.’ Those who follow the network’s programs will know that McKellar recently starred alongside Dolly Parton in ‘Christmas at Dollywood.’ Apart from that, she’s appeared in shows like ‘The West Wing’ and ‘NCIS.’ You can check out her post, urging fans to watch the movie below.

Ultimately, Hallmark’s new movie seems to have taken advantage of filming in British Columbia to weave a thrilling mystery. The tale is compounded with splendid performances and will surely keep us at the edge of our seats.

Read More: Where is Stalker in the Attic Filmed?