Meaning of the Sign at the End of CODA, Explained 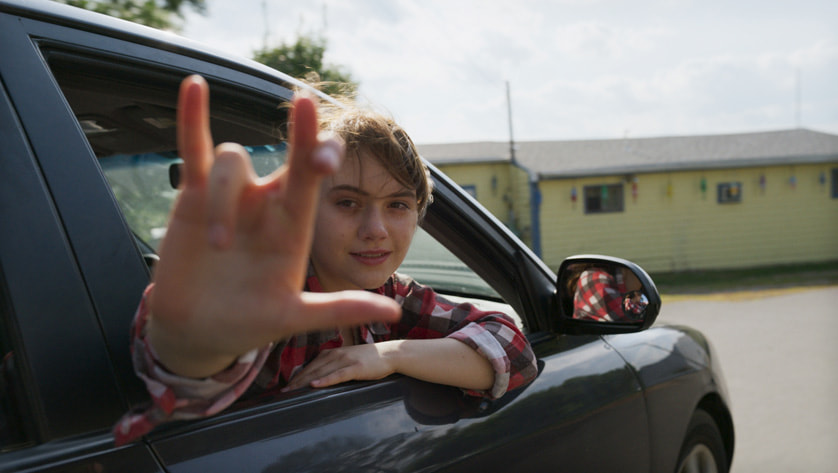 ‘CODA’ is a poignant story that follows Ruby Rossi (Emilia Jones), a CODA or Child of Deaf Adults, who is the only hearing member of her family. Even as the family’s fishing business is threatened, Ruby, a budding singer, gets the chance to attend the Berklee College of Music. Having been the bridge between her family and the hearing world for most of her life, the young protagonist faces a dilemma that is explored in the film’s many nuances.

Director Sian Heder’s film gives audiences an intimate look at the family’s dynamics, Ruby’s role in it, and how they fit into the larger community. The film feels significantly authentic with extended portions of its dialogues in American Sign Language (ASL). In fact, you might have noticed that a few ASL dialogues aren’t even captioned, seemingly because words may not suffice to communicate the feeling. If you’re wondering about the meaning of the sign Ruby makes at the end of ‘CODA,’ we’re here to explain it all to you. SPOILERS AHEAD.

The Meaning of the Sign at the End of CODA

‘CODA’ ends with Ruby getting into Berklee and moving out of the home she has shared with her family all her life. The scene is touching for many reasons, from the Rossi family having to bid goodbye to their youngest member, who has also been their bridge to the hearing world, to Ruby’s exciting new beginning at Berklee. As she drives away after one last hug, Ruby leans out of the car and signs to her family as they disappear in the distance.

One of the major aspects that sets ‘CODA’ apart is its authentic use of sign language. In fact, the film’s script was apparently adapted into ASL, which is a language with its own grammar and nuances. Therefore, the film’s multiple deaf cast members bring in their own natural style of conversing in ASL, and dialogues even include idioms and phrases specific to ASL for authenticity.

Even the film’s captions during ASL scenes are essentially translations and are not literal, word for word, representations of what the characters are saying to each other. It is essential to keep in mind that sign language is not a “hand signal” version of spoken dialogue but a separate language (which differs from place to place, like any other language).

Thus, when Ruby tries to explain to her music teacher how she feels when she sings, she shifts to using sign language because English words don’t seem to suffice. Coming from a deaf family, it is natural that her first language, and one she is most expressive in, is ASL.

The phrase that Ruby signs at the end of the film is also a poignant example of how the language can have variations and be personalized by those using it. Her sign consists of a three-letter phrase that uses the thumb, forefinger, and little finger to depict the letters I, L, and Y, which stand for “I Love You.”

By crossing her middle finger with her index finger, Ruby includes the letter R into the phrase, making it I, R, L, Y, or “I Really Love You.” Whereas the first 3-letter phrase is a very common one, Ruby seemingly adds her own play on it to truly stress how close her family is to her heart.

It appears that the addition of the letter R also adds a dual meaning to the film’s closing (ASL) dialogue since Ruby’s name is seemingly depicted using the signed letter R in the film. As with the title of ‘CODA,’ which is also a play on dual meanings, the film’s closing phrase is a heartfelt message that is nuanced and playfully authentic.