‘CODA’ is a poignant drama that centers around a deaf family and their youngest member — a hearing teenager named Ruby (Emilia Jones). The film explores the complex and tight-knit family dynamic, as well their interactions with the local community. Add to this the family’s flagging fishing business and Ruby’s search for her own identity, and the film becomes a truly layered exercise in heartfelt emotional dilemmas.

Packed with measured humor and tearjerking moments that never go overboard but make for an engaging watch, the story is likely lingering with you much after the credits have rolled. Let’s take a closer look at the ending of ‘CODA’ and make sure we picked up all of its nuanced offerings. SPOILERS AHEAD.

The film opens with Ruby on her seemingly daily fishing expedition with her father Frank (Troy Kotsur) and brother Leo (Daniel Durant). The three bring in their catch of the day with well-practiced movements, and after a short argument with their buyer about the rates he is offering them, Ruby heads off to school. Following a boy named Miles, who she seems to fancy, Ruby signs up for the school choir, which is led by Bernardo Villalobos (who the students refer to as Mr. V).

During her first trial, the teenager gets embarrassed and is unable to sing. However, with some coaxing from Mr. V, she eventually reveals that she has a truly impressive voice, which leads him to select her for a duet with Miles. Soon after, Mr. V also suggests that Ruby applies to Berklee to study music, about which she seems nervous, having never been apart from her family. 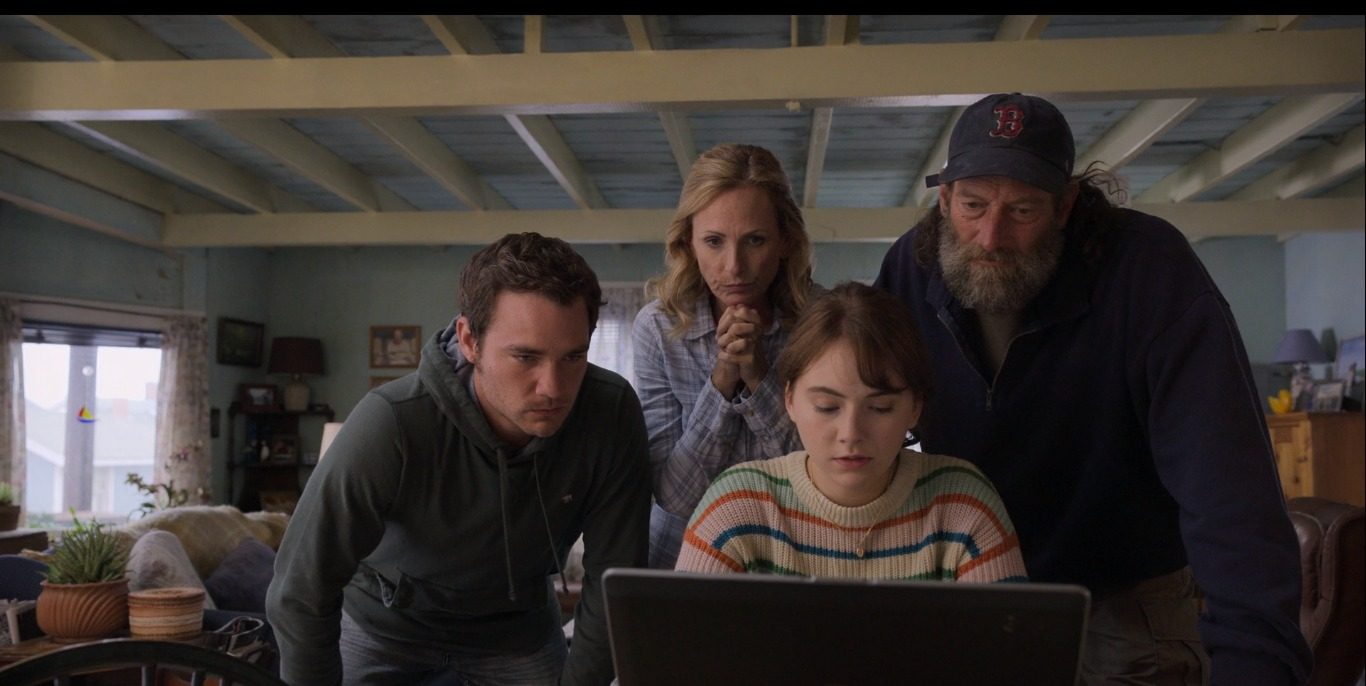 Meanwhile, like many others in the area, the Rossi family fishing business is suffering from new regulations. As much as Frank and Leo despise the new requirements and the plummeting prices they are being offered for their catch, the fact that they are deaf makes it difficult for them to engage with the officials. It is slowly revealed just how important Ruby, the only hearing member of the family, is to the fishing business.

Frank finally plucks up the courage at a town hall meeting and announces (through Ruby) that he is breaking away from the current system and starting a co-op that will get them all better prices. This seems to make the family even more dependent on Ruby, who has also started taking music lessons from Mr. V in the hopes of getting a Berklee scholarship.

CODA Ending: Does Ruby Go To Berklee College of Music?

When she finally tells her family that she plans on going to college to study music, they are aghast. Her mother feels the most strongly about it and questions whether Ruby is any good (since none of them have heard her sing.) Leo, whose girlfriend Gertie has told him how good Ruby’s voice is, supports his sister’s decision. However, after a brush with the Coast Guard gets her father’s fishing license suspended, Ruby decides to stay back with her family, angering her older brother.

The family then attends a choir recital, in which Ruby and Miles perform a moving song together. Unable to hear it, however, her parents and Leo remain unsure of how good she is and seem distracted during her performance. That night, at home, Frank asks if he can touch Ruby’s throat while she sings so he can feel her music. It is an emotional moment, and the next day, the family surprises her by taking her to the audition at Berklee.

Ruby is nervous in front of the stern examiners but is emboldened by the presence of her family. She sings, accompanied by Mr. V on the piano, and is eventually accepted into Berklee. The film’s closing scenes show a heart-wrenching but happy farewell as Ruby embarks on a new chapter in her life and heads off to college. Ruby, therefore, ends up going to Berklee, much to the joy of her music teacher Mr. V. The most touching aspect of this, of course, is that she finally leaves her family to follow her passion for music.

In a brief scene after her audition, we also see her father teaching a new deckhand how to work on the fishing boat, signifying that they have managed to find a new hearing member to help out on their fishing expeditions, which the court order against Frank mandated. This also means that Ruby leaves knowing that the family business is not in jeopardy. The co-op fish stall, with her mother and other women of the fishing community seen running it, also seems to be doing well.

Why Do Her Parents Change Their Mind?

Ruby’s parents seem distracted for most of Ruby’s admirable musical performance, with Frank fidgeting with his buttons and her mother Jackie (Marlee Matlin) fretting about what she should make for dinner. The film also poignantly shows us parts of her musical performance without the sound to give viewers the feeling of just how drastically it changes the whole scenario and to put us in the shoes of Ruby’s family. However, during her duet with Miles, Frank and Jackie begin to notice the crowd’s reactions to their daughter’s voice. People are seen swaying back and forth, smiling, and even tearing up, showing the parents (possibly for the first time) just how well their daughter sings.

This is what leads a thoughtful Frank to sit outside the house after the choir performance and ruminate. When he finally feels Ruby’s voice by touching her throat as she sings, he seems to become convinced that she is truly talented. Despite knowing how others react to his daughter’s voice, it is understandable for the father to be painfully curious about what his daughter’s voice sounds like. Near the beginning of the film, much to his daughter’s embarrassment, we see Frank enjoying loud hip-hop music in the car by feeling its vibrations. He now uses this same process to experience his daughter’s voice, which convinces him about the path she chooses.

Why is Leo Angry About His Sister Staying Back?

Leo and Ruby share a complex relationship that is slowly revealed. They are initially seen to very close, thanks in part to their father, who insists that any and all fights should be directed at people outside the family — like the ones hurting their fishing business. However, we later see that Leo harbors a certain bitterness towards his younger sister. When Ruby announces that she plans to delay going to college to help with the family business, he gets agitated and calls her a “saint” sarcastically.

The reason for his chagrin is later revealed when he tells her that as the older brother, it is his duty to watch over the family business so that she is free to follow her dreams. When Ruby reminds him that most people will not make an effort to communicate with him, he tells her that the family was able to get by before she was born and will be fine even after she goes to Berklee. Leo doesn’t feel ill will against his sister but likely feels frustrated because the family is so dependent on her for the family business. He, therefore, repeatedly tries to convince her and their parents that he can handle more responsibility.

Do Ruby and Miles End Up Together?

Possibly the only downside (but also poetic aspect) of Ruby leaving for college is that her flame-turned-boyfriend Miles cannot join her. He “chokes” at his Berklee audition and doesn’t get selected. At the end of the film, the two are decidedly together and are seen kissing and then jumping together into a flooded quarry. However, Miles also mentions how Ruby will soon fall in love with a musician in a fedora while she’s away at college.

Though he says it jokingly, this might just be the case. Ruby, who has never been away from her family, is embarking on a completely new phase, far removed from her so-far sheltered life. Therefore, her tastes in potential romantic partners may drastically change in the near future. Hence, her proclivities towards fedora-wearing musicians notwithstanding, there is a definite possibility that the long-distance relationship she and Miles are embarking on might not last.