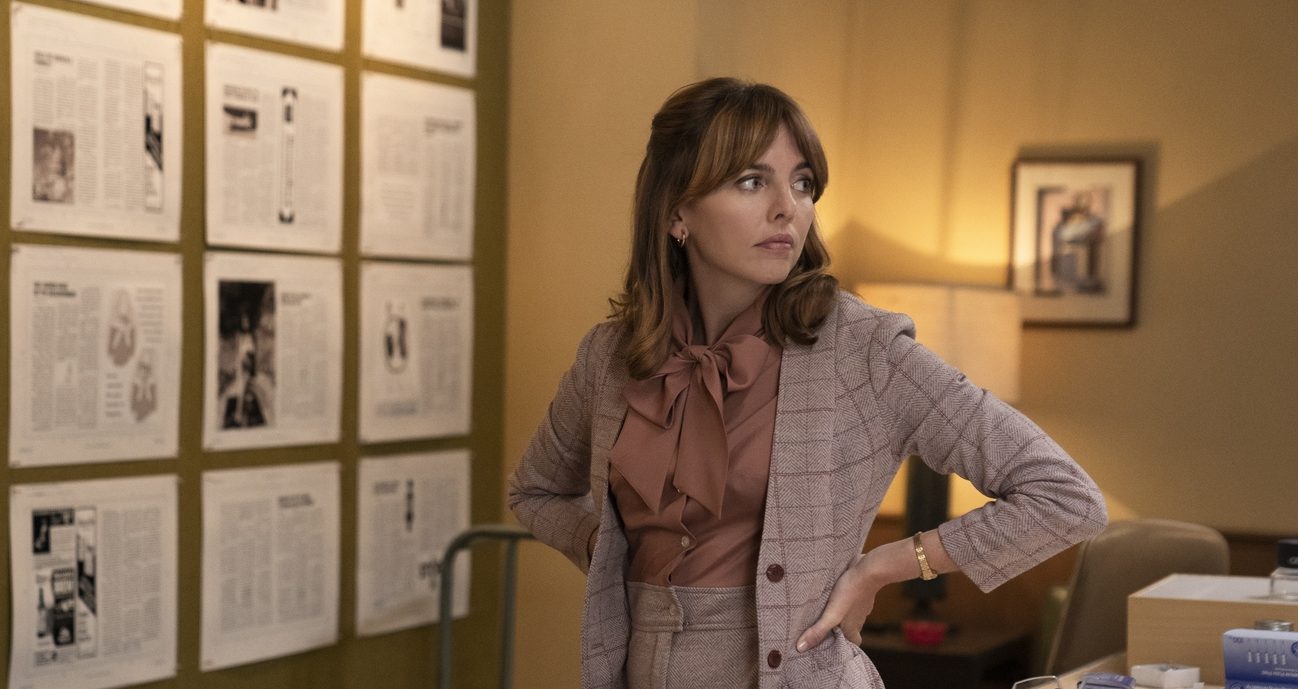 After completing the first issue of Minx, Joyce and Shane prepare for a press conference to introduce the magazine in the fourth episode of HBO Max’s comedy series ‘Minx.’ Doug and Westbury’s enmity progresses as the latter asks the county tax auditor to go through the financial records of Doug’s Bottom Dollar Publications.

Tina comes across some discrepancies in the publishing house’s accounts. Joyce and Shane’s workspace relationship takes a dramatic turn, resulting in a major challenge on Joyce’s way just before the release of Minx’s first issue. As Shane determines Minx’s fate, there’s a lot to discuss regarding the episode’s ending. Well, here’s our take on it! SPOILERS AHEAD.

The fourth episode of the show, titled ‘An exciting new chapter in the annals of erotica,’ begins with Joyce preparing Shane for a press conference. Joyce tries to teach him the basics of feminism while Doug and the others explain to Joyce that every question will be focused on his turn-ons and turn-offs. Tina starts to go through Bottom Dollar’s accounts as Westbury instructs the county tax auditor to examine the company’s finances. She finds out that there’s a difference of fifty grand in the books. Doug and Tina question everyone working in the company to find out who stole the money.

Meanwhile, Joyce and Shane continue their preparation at the former’s house. Joyce’s attempt to teach Shane about patriarchy leads to them having sex. Even though Joyce believes that it is a one-night stand, Shane misunderstands that they are a couple. He invites his father and mother to the press conference to introduce Joyce. She gets alarmed and explains to Shane that they aren’t a couple and their relationship is just casual. Heartbroken, Shane demands to not use his photographs in Minx. Joyce talks to Doug about the predicament, who explains that there isn’t any way he can pull the five hundred thousand printed copies of the issue to not use the photographs.

Minx Episode 4 Ending: Do Joyce and Shane Reconcile? Does Shane Pull His Photographs Out of Minx?

When Joyce makes it clear to Shane that they aren’t in a relationship, anger conquers Shane and he demands that his photographs not be used in the magazine. Even though Joyce wants to comply with his demand, Doug tells her that they have a signed contract in place with Shane to use the photographs even if he changes his mind. Since she doesn’t want to use them without the consent of the firefighter, Joyce meets him at his fire station and explains her concerns. She tells him that he can be a real model and eventually an actor if he continues to work in Minx, only for Shane to dismiss her.

Joyce also admits that she should have met his parents and dealt with the predicament between them in a better way. After losing hope, Joyce promises Shane that she will not use his photos — irrespective of the consequences — if he doesn’t approve. The next day, Joyce comes across a happy Tina, who gives her a stack of Minx’s first issue with Shane’s photographs. Joyce’s promise must have influenced Shane to give her the green light to use his photographs. Even though he is disappointed with her, Shane realizes that Minx is more than Joyce not wanting to have a relationship with him.

Shane’s modeling work for the magazine gives him a sense of identity among his peers and he doesn’t want to destroy that just because he is angry with Joyce. He also realizes that his experience with Joyce has made him emotionally stronger and confident enough to stand up for himself when his colleagues mock him. Through Joyce, Shane learns that the notion of masculinity is just a patriarchal construct and he explains the same when his colleagues tease him for not being masculine enough. Since Joyce leads him in a new and positive direction in life, he may reconcile with her, at least to nurture a professional relationship.

Joyce’s explanation may have also helped Shane to understand that she hasn’t used him physically for any gain. In the upcoming episodes, we may see Shane continue to develop as an individual by accepting his feelings and nature under the guidance of Joyce. Although we may need to wait to see whether they will pursue a romantic relationship hereafter, especially since Glenn wants to reconcile with Joyce, they may reconcile as two professionals working for a magazine that enriches both of their lives individually.

Why Did Doug Steal Fifty Grand From His Company?

When Tina and Doug’s investigation to find the stolen fifty grand comes to a dead end, the former asks her boss to fire the accountant. Since Doug is a man of principles, he decides against firing the accountant and confesses to Tina that he stole the money. Doug is a man of ambitions and his ambitions do not allow him to run a business following rules and regulations impeccably. For him, the betterment of his company comes first and the rules imposed by government authorities come second. Thus, he stole fifty thousand dollars from his company’s accounts.

Doug is currently working on expanding Bottom Dollar Publications and has even commissioned an architect to work on a plan for a new headquarters for his company. He wants his company to attract big players for advertisements and become the best adult entertainment publishing house in the region. And the only way in front of Doug to achieve his dreams is to “spend the money he doesn’t have,” or in simpler teams, to spend the money he has to pay the government as tax.

Read More: Who is Bridget Westbury in Minx? Is She Based on a Real Councilwoman?