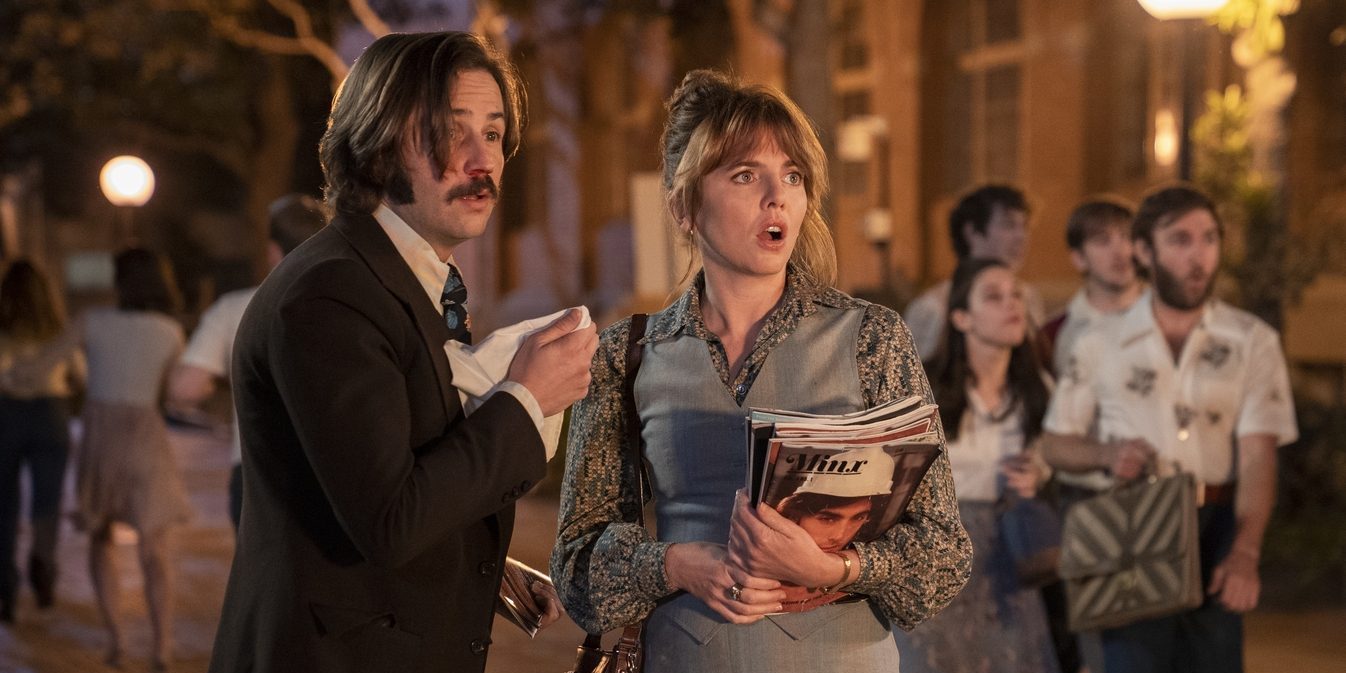 The seventh and eighth episodes of HBO Max’s comedy series ‘Minx’ follow the aftermath of the student protest against Minx. The protest creates astounding publicity for the magazine, which paves the way for its stunning sales. Joyce seeks Glenn for comfort when she stoops to despair due to the general disapproval of her creation. Doug celebrates the sales of Minx with Tina and the two of them begin a romantic journey together. Joyce represents Minx in ‘The Dick Cavett Show,’ which exposes the conflicts between her and Doug. The eighth episode ends with a startling decision Joyce makes regarding Minx’s future and here’s a detailed look at the same! SPOILERS AHEAD.

The seventh episode of the show, titled ‘God Save the Queen of Dicks,’ begins with the sales of Minx skyrocketing upon the student protest against the magazine. Joyce tells Doug that the people are reading her magazine as part of the controversy and not as she intended. She talks to a reporter to explain the notions of female sexual awakening she imparts through the magazine, only to fuel the disagreements. Immersed in disappointment, she spends a night with Glenn for comfort. Glenn asks Joyce to leave Doug’s Bottom Dollar Publications and join his to-be-launched company to relaunch Minx as the company’s flagship product.

Joyce realizes that Glenn, who didn’t initially believe in her magazine, is only trying to take advantage of Minx’s popularity to gain money. Doug and Tina celebrate Minx’s sales figures together and end up sharing a kiss. They consider being in a relationship without letting anyone around them know. Richie receives an invitation from famed gallerist Edward Shawn to attend his party to celebrate the success of Minx. He goes to the party with Bambi and meets artist Hockney, who praises his work in the magazine. Joyce joins them and they celebrate her achievement.

The eighth episode of the show, titled ‘Oh, You’re the Sun Now? Giver of Life?,’ begins with Joyce getting ready to appear on ‘The Dick Cavett Show.’ She meets her former colleague and shares the joy of the success of her magazine. Doug meets Billy Brunson, a renowned football player, to convince him to appear on the cover of Minx’s next issue. After the meeting, Doug goes to the taping of ‘The Dick Cavett Show’ and encounters Victoria Hartnett, the writer who wrote the feminist classic ‘Suffering Suffragettes.’ Doug talks to her about his involvement in Minx without realizing that she is a guest to appear on the show along with Joyce.

Joyce uses her appearance on ‘The Dick Cavett Show’ as a stage to explain the feminist foundations of Minx. She answers Dick’s questions with confidence and expresses that her magazine is very much a part of the feminist movements happening around her. To accommodate an opposing voice, Dick invites Victoria Hartnett to the show, who criticizes Joyce’s magazine as a businessman’s way of taking advantage of Joyce and her feminist notions to make money. Victoria deems Joyce’s feminist articles as “superficial” since the center of Minx’s attraction is penises. Joyce tries to explain her side, only for Victoria to tell her that she is being used by Doug.

Meanwhile, Dick invites Doug to the stage, who announces that Billy Brunson will appear on the cover of Minx’s next issue without even a discussion with Joyce, the magazine’s editor-in-chief. Joyce, who has been trying to convince Dick, Victoria, and the audiences that Doug doesn’t interfere in editorial affairs, feels extremely offended and disappointed. She hands over the materials required for the magazine’s third issue to Doug and tells him that she is no longer part of Minx or his company. Doug, who was trying to take advantage of the national coverage of ‘The Dick Cavett Show’ to increase the hype and publicity of Minx, decides to not apologize to Joyce.

Even though Joyce hands over the materials to Doug and tells him that she can’t let anyone treat her like he did, Minx is too important for her to just walk away. Her decision to leave Doug’s company can be a spur-of-the-moment action that she may retract. When her indignant feelings toward Doug calm down, Joyce may realize that Doug’s actions were motivated by his wish to see the betterment of her dream project. She may give Doug a chance to apologize to her to potentially reconcile with him. Joyce knows that her dream to launch a magazine materialized only because of Doug, which may lead her back to Minx and Bottom Dollar Publications.

Furthermore, Joyce may realize that she doesn’t need the approval of her idols to move forward with Minx. She may realize that penises and pornography helped her to build a voice of her own in her society and discarding that voice must be the last thing Joyce wants to do. Challenging the opinions of Victoria, Joyce may continue publishing articles that matter to the women around her through Minx upon potentially reconciling with Doug. Rather than considering her magazine as an island of her own, Joyce may listen to Doug’s needs and demands for the sake of Minx.

Joyce may understand the value and relevance of Minx in her society beyond the three issues that are included in her contract with Doug’s company. If that’s the case, we can expect Joyce to return to her office at Bottom Dollar sooner than later. Doug, who prioritizes Minx more than his ego, may strike a deal with Joyce again for her to return to her magazine and his company.

Read More: Where is Minx Filmed?