In the increasingly cynical superhero genre, ‘MY Hero Academia’ remains constant as a bright ray of sunshine. It celebrates heroism in an unassuming and optimistic manner that has become quite rare in today’s pop culture. The story revolves around the aspiring pro-hero Izuku Midoriya, who has received the One For All Quirk from his idol and the greatest hero on Earth, All Might.

‘My Hero Academia’ season 5 is the adaptation of the Joint-Training Arc of the original manga series. In episode 11, titled ‘Our Brawl,’ Midoriya, Ochako Uraraka, Mina Ashido, and Minoru Minata’s match with Neito Monoma, Yui Kodai, Reiko Yanagi, Nirengeki Shouda, and Hitoshi Shinsou continues. Neito puts a desperate plan in effect to capture Midoriya, but it fails. Midoriya surprises even All Might by showing that he has already gained some control over his newly manifested Quirk, Blackwhip. As Midoriya goes after Shinsou, Ochako demonstrates what an awesome young pro-hero she is by defeating 3 of their other 4 opponents. Here is everything you need to know about the episode’s ending. SPOILERS AHEAD.

With all the members of both teams gathered at one place, it turns into a brawl. Shinsou tries to grab Ochako with his Capturing Weapon, but Midoriya intercepts. In response, Shinsou gives his weapon a hard tug, pulling Midoriya forward. When a surprised Ochako wonders if Shinsou is more powerful than Midoriya, the latter explains that he doesn’t want to use his Quirk in this situation as it will put the others’ lives in danger again.

Meanwhile, Mina bravely takes on Nirengeki and Yui until Minoru saves her from Nirengeki’s Twin Impact Quirk with his Grape Buckler shield. As he had planned, he gets shoved right into Mina’s breasts. An irritated Mina uses Acid Layback to hurl Minorou at their opponents, and Minorou activates the Grape-Pinky Combo Mineta-Bounce attack, which prevents the Class 1-B team from regrouping. 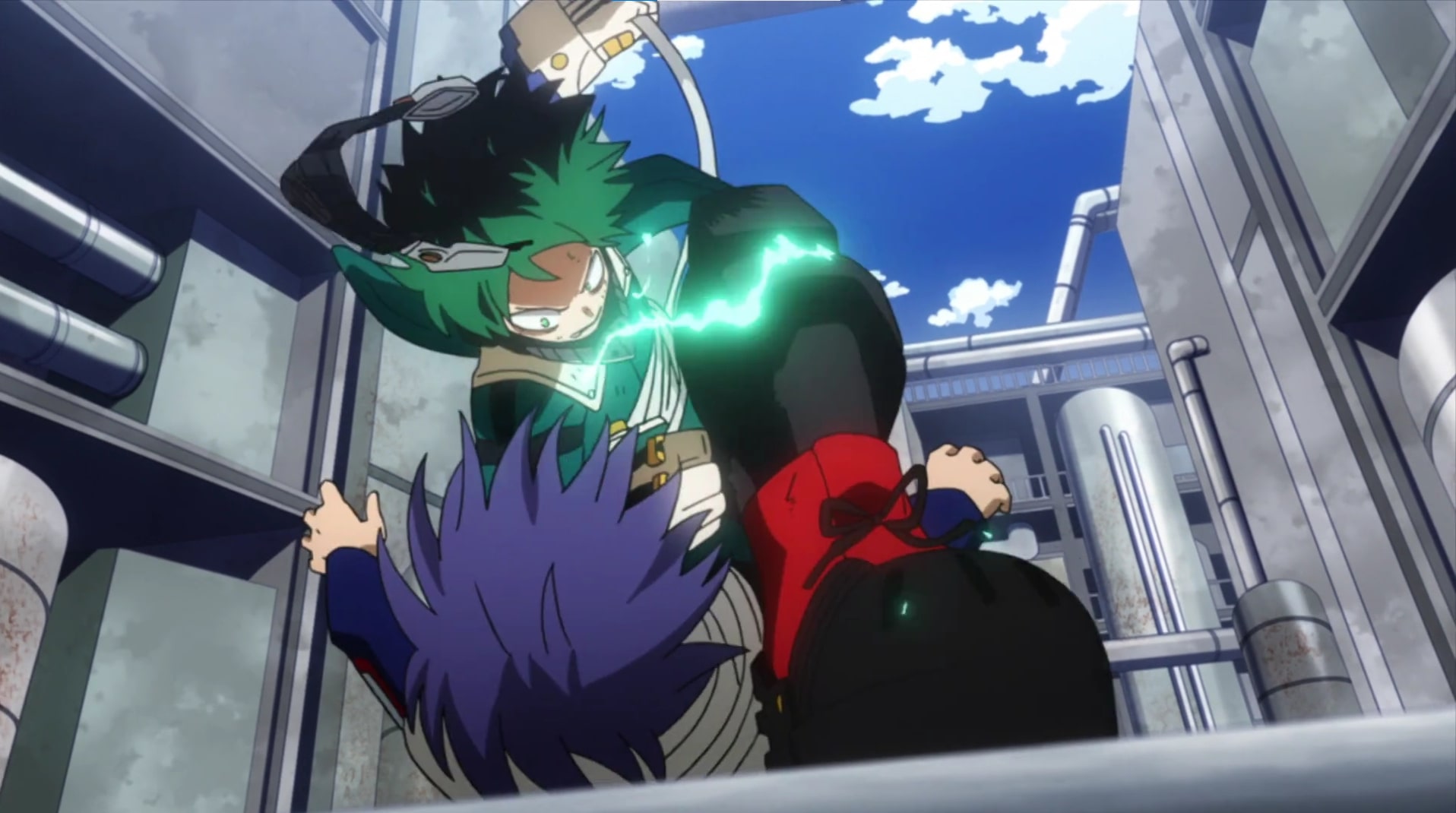 As Neito has already touched Midoriya, he tries to use One For All to attack Midoriya and Ochako. Fearing that the Quirk will tear Neito apart, Midoriya attempts to warn him, but the Quirk malfunctions for Neito, and Ochako quickly defeats him with Gunhead Martial Arts.
Shinsou tries to help his teammate, but once again, Midoriya grabs the Capturing Weapon, and Ochako sends him to his opponent with her Quirk. Midoriya recalls his conversation with the original Blackwhip user and consciously activates the Quirk this time. However, Blackwhip goes away soon after, leaving him feeling drained. As Ochako takes Neito to her team’s cell, the latter asks her how many Quirks she thinks he now has.

Noting that Neito has 3 clocks on him, Ochako signals 3. In response, Neito cryptically asks her what her response will be if he has copied 4 Quirks. This is soon proven to be true. As Midoriya chases after Shinsou, Neito attacks him with Twin Impact. Hoping that it will give Shinsou the opening he needs. However, it’s not enough to defeat Midoriya. Activating One For All, he wraps himself in Shinsou’s Capturing Weapon and subdues him. Elsewhere, Ochako defeats Yui and Reiko while Mina knocks out Nirengeki. Midoriya’s team wins the match 4-0. Afterward, Midoriya thanks both Ochako and Shinsou for helping him when Blackwhip first manifested.

Class 1-A wins the Joint-Training Session 3-1. They won the first match, lost the second, drew the third, and again won the fourth and fifth matches. Admittedly, the overall result doesn’t reflect how competitive the session was. Except for the fourth match, when Bakugou’s team basically obliterated their opponents, each round was a hard-fought battle. The students got to demonstrate how far they had come since they enrolled at U.A. High School. Certain personal rivalries came to the forefront as well. Especially in match 2, in which Yaoyorozu fought Kendou and Tokoyami fought Kuroiro.

Furthermore, Shouto, during his fight with Tetsutetsu, learned that he had to embrace the fire aspect of his Quirk if he ever wanted to be a successful pro-hero. During the session, Midoriya, the much-loved protagonist, developed a brand new Quirk, and Ochako showed how self-reliant she had become. But more than anything else, the session demonstrates who Shinsou is and what a great hero he can potentially become in the future.

As he reveals to Vlad King and Aizawa, Shinsou has figured out that the teachers used the session to see if he can be transferred to the hero course. As Midoriya thanks him for the help, Shinsou admits that he felt somewhat inferior to other competitors. This earns him a scolding from Aizawa, who reminds him that those competitors have been training to be pro-heroes for a long time before adding that Shinsou has passed the test. Although it isn’t revealed yet in the anime which hero class Shinsou will join, one thing is sure. He will continue to improve himself and strive to live up to the school’s motto, “Plus Ultra,” or Further Beyond.

During match 5, when Shinsou grabs pieces of pipes with his Capturing Weapon and tries to use it against Midoriya, the latter recalls his conversation with the original Blackwhip user and how that pro-hero reminded him of All Might. As a result, Midoriya regains confidence in his Quirk, and the black tendrils subsequently manifest from his hand. This leaves even All Might surprised, who stops Vlad King and Aizawa from intervening and wonders what has happened in the last few minutes to bring about such changes in his young disciple. Ultimately, however, Blackwhip proves to be too stressful on Midoriya’s body and deactivates on its own, making him realize that he has to gain full control of One For All first to use the other Quirk effectively.