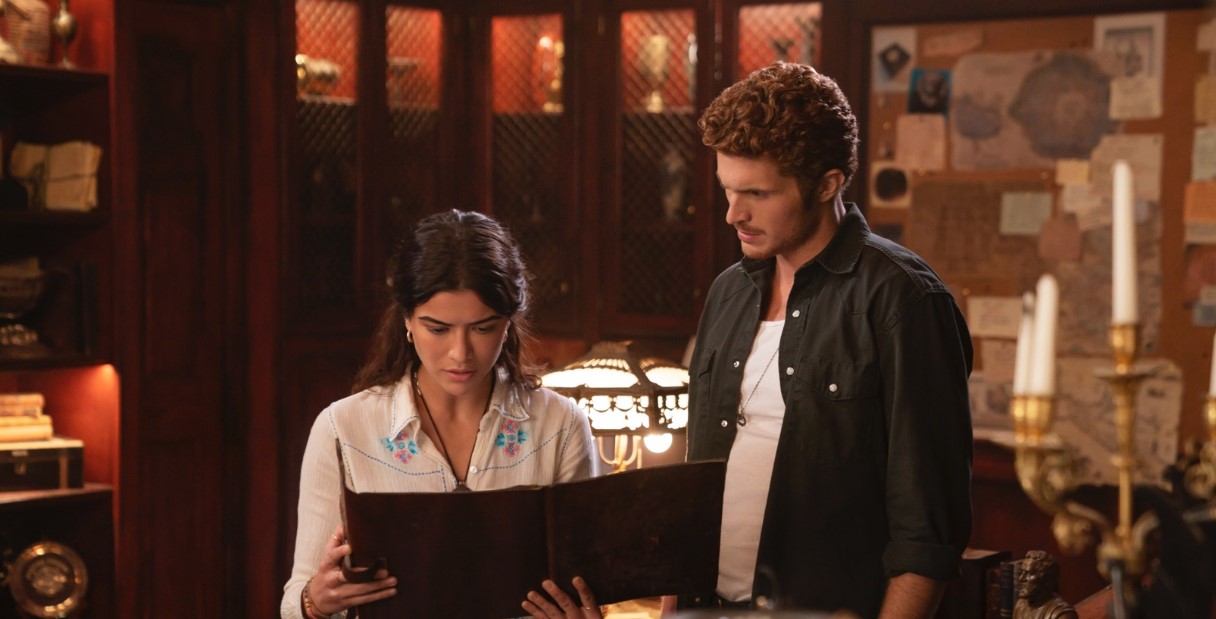 One of the most fascinating things about the ‘National Treasure’ franchise is how they always succeed in turning popular and well-known American historical locations into places where clues of the treasure or the treasures themselves might be found, adding a layer of mystery and wonder to the lore of these destinations. ‘National Treasure: Edge of History’ keeps up the tradition as Jess (Lisette Olivera) and her friends visit Graceland, once the home of the late rock and roll icon Elvis Presley in episode 3, titled ‘Graceland Gambit.’ Meanwhile, Billie (Catherine Zeta-Jones) loses a trusted subordinate in her desperate pursuit of the treasure. Here is everything you need to know about the ending of ‘National Treasure: Edge of History’ episode 3. SPOILERS AHEAD.

The episode begins with Jess learning the truth about her parents or at least a part of it. She and Liam (Jake Austin Walker) find a video cassette in the collection Liam’s father left behind and visit Oren (Antonio Cipriano) along with Tasha (Zuri Reed) to have it played. Jess is stunned to discover that the video depicts her mother presenting her thesis on the treasure. Manuela theorizes that Malinche, the Nahua woman who became the consort of Hernán Cortés himself, was part of a secret society of women, the Daughters of the Plumed Serpent, who kept the treasure of the indigenous people safe.

Manuela is interrupted by one of her colleagues. This is when Rafael steps in, defending his wife’s ideas and declaring that they will prove the truth by finding the treasure. This is the first time Jess has heard her father’s voice. She becomes more emotional when she sees her parents dancing together, realizing that what she knows about her father is not at all true.

Jess and her friends figure out that the next clue for the treasure is in Graceland and head there. Meanwhile, Billie and her people succeed in opening the relic they took from Jess. It is revealed that Billie has a second relic as well. They open up that one and conclude, just as Jess did, that this is a map. Billie deduces that the last relic is hidden in Iztaccihuatl, Mexico. However, that part of the map turns out to be a trap and leads to Nate falling to his death.

At the FBI headquarters, Agent Ross (Lyndon Smith) decides to look into Peter Sadusky’s (Harvey Keitel) death, even though her boss told her not to. She even finds a partner for her insubordination in the lab technician Dr. Zeke Hudson.

The initial plan that Jess and her friends have entails Liam and Ethan going into the Graceland museum as pest control after Oren planted a couple of moths close to one of Elvis’ jackets. That doesn’t work because they thought the clues were in one of Elvis’ guitars when it was actually in a gold record.

This time, Liam and Jess go in together. While Liam keeps the security distracted by singing “Suspicious Minds,” Jess finds her way into the secret vault and copies the content of the gold record. After they get out, Tasha wipes out their presence from the surveillance hard drive. That evening, Ethan, who became worried after learning that Jess had gone into Graceland, visits Liam and reveals that Jess is an undocumented immigrant. He immediately feels ashamed, as it wasn’t his secret to reveal, and goes to apologize to Jess.

National Treasure: Edge of History Episode 3: Is someone among Jess and Her friends working for Billie?

This episode makes a big revelation about Jess and her friends. After Jess and Liam decipher the recording on Elvis’ gold record, someone sends the deciphered audio to Billie, revealing that one of Jess’ friends is working for Billie.

Jess can’t possibly be the traitor, as that wouldn’t make sense in terms of the narrative. She is the one who initiates the search and is determined to find out what happened to her father. She would never tarnish the memories of Rafael and Manuela by giving Billie the information she has found.

This leaves Liam, who has as big of a familial reason to be part of the treasure hunt as Jess. Both their fathers died because of the treasure, but we have to remember here that Liam is having serious financial trouble. He immediately wanted to sell his grandfather’s house after inheriting it but was prevented from doing so.

In fact, almost everyone in Jess’ group has financial problems. So it can be anyone among them. This is going to be a major mystery, at least in this season of the show.

What Does Elvis’ recording Say?

Before they are thrown out of Graceland, Jess and Liam succeed in copying the content of the gold record. It turns out that Elvis’ grandmother was a member of the Daughters of the Plumed Serpent. The Plumed Serpent is another name for the deity Quetzalcoatl, also known as Kukulkan.