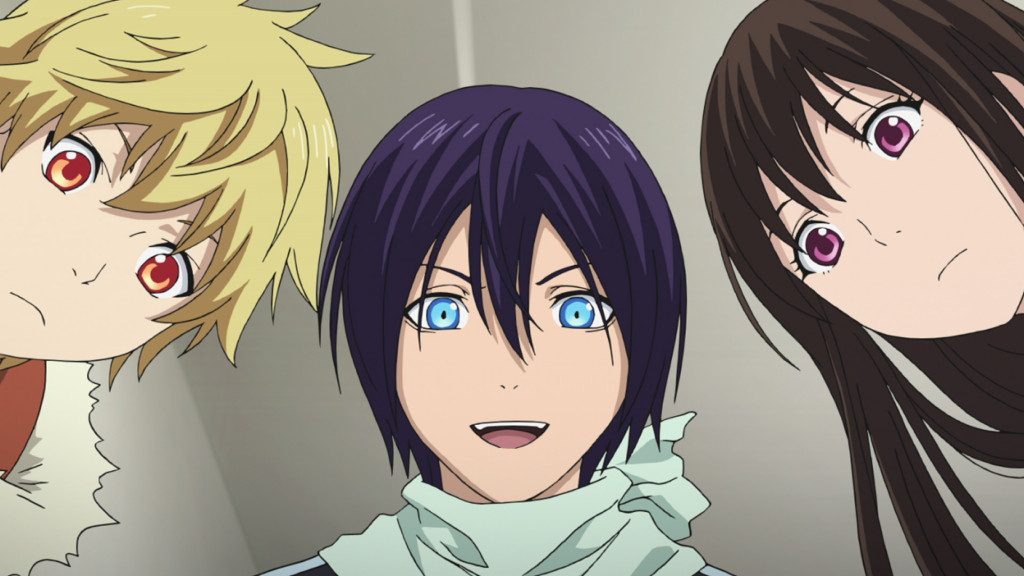 It is always a little tricky to write reviews for sequels of a particular anime because the audience it is targeted towards includes people who have already seen it and also the ones who have not. So in order to be fair to both of these audiences, I’ll try my best to not reveal too many plot holes of the second season, but will still try to discuss several other important aspects of the anime. I’ll also be comparing it with the first season to discuss how it has improved and even downplayed itself a little.

‘Noragami Aragoto’ is an almost perfect sequel. It picks up just the right things from the first season and improves them further for the new season. It has also removed pretty much anything that most fans had complained about with respect to the first one. The sense of styling and the effortlessly cool animation are maintained, but it’s the new characters and the unique storyline that make ‘Noragami Aragoto’ a blissful experience for all of its viewers. Even after having a pretty good first season, it’s amazing to see how this anime has still made an attempt to improve. So if you enjoyed the first season, then this season is just going to be way beyond what you expect from the show.

Bones Studio is known for its unique style of creating shounen anime that combine action with compelling music. Even the colors used by the studio are often bold and strikingly beautiful. The best thing about all Bone Studio anime is that they are willing to take risks when it comes to the style of animation. This might not always work for them, but when it does, the outcome is absolute eye candy. And there is no better example of this than season 2 of ‘Noragami’. The action sequences have been detailed really well and their execution and placement are just perfect.

Most shounen anime focus a bit too much on the physical appeal of the show and just forget about its emotional depth. Only a few anime like ‘Noragami Aragoto’ are able to hit the right balance between the two. The entire plot has been constructed carefully, where the development of characters drives the entire premise. The conflicts that lead to action sequences are not just merely there but they are an outcome to situations created in the plot. The anime never loses sight of its characters and their emotional core.

Humor and sorrow are rightly balanced by not focusing on big events that impact the characters but by relying on brief and subtle developments throughout. This allows you as a viewer to take your time in knowing each character slowly so that in the long run, you are able to connect with each one more deeply. Even the ending is highly satisfying on an emotional level and the post-credits teasers have just made it pretty obvious that there will be another season to this great anime. Before we dive into a slightly more detailed review of the show, let’s first quickly run through the plot and release date. Those who have not seen the anime yet can directly skip ahead to the review.

The first episode of ‘Noragami Aragoto‘ i.e. Noragami season 2 released on October 3, 2015 and the last episode came out in the same year on December 26. Season 2 has a total of 13 episodes where each episode is 24 minutes long. From the ending of the second season, it becomes pretty obvious that there will be another season. There is a rumor going around that it may come out in the year 2019 or 2020, but we still haven’t received any confirmation regarding that. We just hope that it comes out soon because the anticipation is now killing us. Get more details about Noragami season 3 right here.

The first season of ‘Noragami’ that goes by the name “Stray God” revolves around Yato, who is a god but no one really knows anything about him. He tries his best to help the ones in need and even his phone number appears in red when someone needs his help. But even after adopting such desperate ways to be known, he still is a god who has no shrines named after him. Yato lives his life as a failed god and like other normal humans, he settles for a less paying human job to keep his head above water. Soon, his assistant gets sick of his uselessness and decides to leave him.

Yato starts settling with the idea that his grim fate cannot be changed but that’s when things take a major turn. A middle school girl named Hiyori Iki saves his life one day by taking a hit from a car that was actually directed towards him. Miraculously, Hiyori survives this accident but now her soul is left loose and she is not able to get back to her physical body. She reaches out to Yato for help because he is the only person who can see her. But before Yato can help her out, he’ll first need a new weapons assistant. Hiyori decides to help him out with this and the two set out on a quest to find the perfect assistant for him.

Nothing really changes in the second season and Hiyori still lurks around with a loose soul. Yato returns to his old life with his low paying job and continues helping Hiyori. We are then shown the relationship between Yato and the goddess of war, Bishamon, who hate each other intensely. Bishamon and Yato keep getting into unwanted feuds with each other that don’t usually end well. However, the lives of many innocents are under danger now and the only way to unravel all the underlying mysteries is to make amends with the past. Both of these characters go through some major changes and Bishamon manages to come to peace with her past, leaving behind all her hate for Yato.

Let’s start off with the story of this season. There is no doubt that the story of the first season is very entertaining but during the second half, it just feels like there’s nothing more to it. The plot does not dwell any deeper than Hiyori’s and Yato’s adventures. But all of this changes in the second season and for those who have never read the manga, most of it even comes as a surprise. While mildly focusing on the present events that follow the first season, season two dives deep into the dark past of Yato and explores how it can have a huge impact on his present life. All the answered questions from the first season with respect to Yato’s relationship with other gods are answered. Some parts of the show still remain a mystery even after the second season, but surely, it will catch up on those in season 3.

The animation is done by a studio that created some memorable shows like ‘Fullmetal Alchemist: Brotherhood’ and ‘Soul Eater’. Bones is known for taking risks with its art and style, the outcome of which is usually amazing. As expected, even with ‘Noragami’ the character designs, color, and detail are all just remarkable. The character designs just fit right in with the personalities they portray, making them even more likable. Even the mannerisms of each character go well with their personalities.

Some characters like Yato and Bishamon go through some major transformations compared to the first season. Yato who was once a fun and frolic character has now turned into this serious hero who is willing to do anything for his loved ones. Bishamon also changes for the better and decides to leave all of her hate and toxicity behind. Hiyori is probably the only character who pretty much remains the same but we do love her the way she is. New characters are introduced in this season but they don’t really stick with you because there is already so much more going on with the old ones. The anime will probably focus more on the development of others in the upcoming seasons.

The sound and music feel pretty much the same, with an introduction of a few new tracks here and there. Overall, the sound has always been above average since the first season itself. Even the voice acting has been above satisfactory and it merges well with all the characters. We would conclude that ‘Noragami’ has managed to make quite a jump when it comes to improvement. It could still work a little more on the comedy aspect of it because season 2 seems to take a slightly more serious tone. This may be necessary for setting up a new base for the premise of the second season but even characters like Yato who are just downright hilarious in the first season now suddenly seem to be all uptight about things. The expansion on the characters has been its biggest strength and hopefully, it will continue doing that even later.

‘Noragami Aragoto’ is a very enjoyable anime and you won’t be bored for even a second while watching it. On a scale of 1 to 10, it lands a solid 8.5 with a little more room for improvement. We hope that the third season comes out soon because some mysteries still need to be unraveled but till then, our only option is to read the manga, which will soon come out with a new volume.

You can find the English Dubbed and Subbed versions of ‘Noragami’ Season 2 on Funimation, which happens to be the official licensor of this anime and also on Crunchyroll, which is another reliable source where you can get your daily dose of anime.