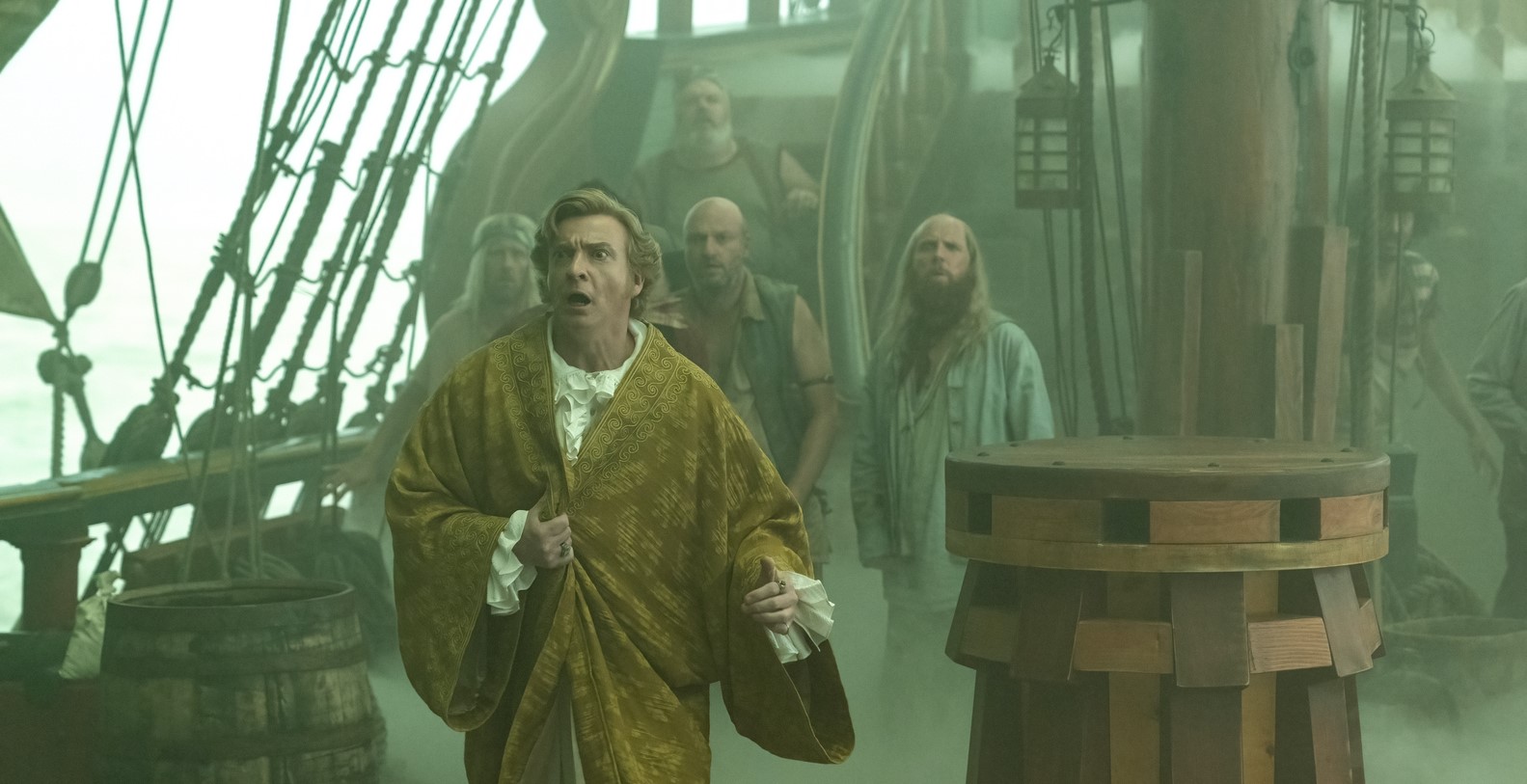 After the near escape from the Spanish Navy in episode 3, Stede (Rhys Darby) spends most of episode 4 being delirious from the injury he suffered. Blackbeard (Taika Waititi) takes control of the Revenge. Most crew members initially welcome the change, but they soon come to believe that Blackbeard is no less eccentric than their captain. Moreover, their time with Stede has changed them as well. In episode 5, Blackbeard and Stede attend a formal party hosted on another ship. In episode 6, the conflict between Stede and Izzy Hands comes to a tipping point. Here is everything you need to know about the ending of ‘Our Flag Means Death’ episode 6. SPOILERS AHEAD.

In episode 4, titled ‘Discomfort in a Married State,’ Stede dreams about his life before piracy. He was married to a woman named Mary. Their marriage was arranged; neither loved the other. They had two children and a vast amount of wealth, but nothing exciting happened to them. They both grew disgruntled with their life, but Stede was the one who decided to do something about it. One night, he left his family and the life of luxury behind to become a pirate.

As Stede recovers from his injuries, Spanish naval ships begin to chase after the Revenge. When Stede finally wakes up, he forms an odd camaraderie with Blackbeard, who has grown tired of his own life as well. Blackbeard suggests to Stede that they should help each other. While Stede can teach Blackbeard how to be a gentleman, Blackbeard can teach him to be a pirate. Blackbeard also convinces the other man that they should wear each other’s attire.

The crew of Revenge escapes the Spaniards by making them believe that they are close to a lighthouse. Towards the end of the episode, Blackbeard reveals his real plans to Izzy. He intends to retire and hand his crew over to Izzy. But first, he has to ensure that the governments of the world think that he is dead. For that purpose, he needs Stede.

In episode 5, titled ‘The Best Revenge Is Dressing Well,’ Stede, Blackbeard, Oluwande, and Frenchie go to a high-society party where the rest of the attendees are French aristocrats. Using passive aggression, the greatest weapon of the upper class, they swindle those people out of their money. Soon, the aristocrats start fighting each other, and their ship catches fire. In episode 6, titled ‘The Art of F**kery,’ the crew organizes a horror production for a Dutch merchant ship. Lucius is forced to cut off his finger after being bitten by Buttons. He also starts a relationship with Black Pete.

Our Flag Means Death Episode 8 Ending: What Happened to Blackbeard’s Father? Did The Kraken Really Kill Him?

Although Blackbeard tells the crew of the Revenge that the Kraken killed his father, it is later revealed that something completely different happened to the man. The Kraken is a legendary sea monster from Norwegian mythology. Encounters with colossal squids probably inspired the creation of the legend. They don’t exist in real life, and as it turns out, they don’t exist in the world of ‘Our Flag Means Death’ either.

Blackbeard’s father was abusive to both him and his mother. When Blackbeard was a teenager, he killed his father with a rope and has since hidden the truth by claiming that it was the Kraken. During the production, the long-suppressed memories resurface, and Blackbeard later confesses the truth to Stede, even admitting that he hasn’t killed anyone since then.

Why Does Izzy Hands Leave the Revenge?

Izzy Banks has been with Blackbeard for a long time. He begins to question his captain’s sanity after the latter develops an interest in the gentleman pirate. He still agrees to it, believing that Blackbeard must have an ulterior motive. In episode 4, when Blackbeard tells him that he plans to get Stede killed in his stead so he can retire from piracy, Izzy happily goes along with it. In episode 6, they are supposed to execute the plan during the production in front of the crew of the Dutch merchant ship. However, Blackbeard recalls what happened to his father, and Stede comforts him. As a result, Blackbeard decides not to go through with the plan.

This is the last straw for Izzy. He angrily duels Stede and loses after his sword break. Even though he manages to stab Stede, the latter has positioned his vital organs to the side, just as Blackbeard has taught him. As agreed before the duel, Izzy leaves the ship. He then heads straight toward the Republic of Pirates with an offer for Jackie.