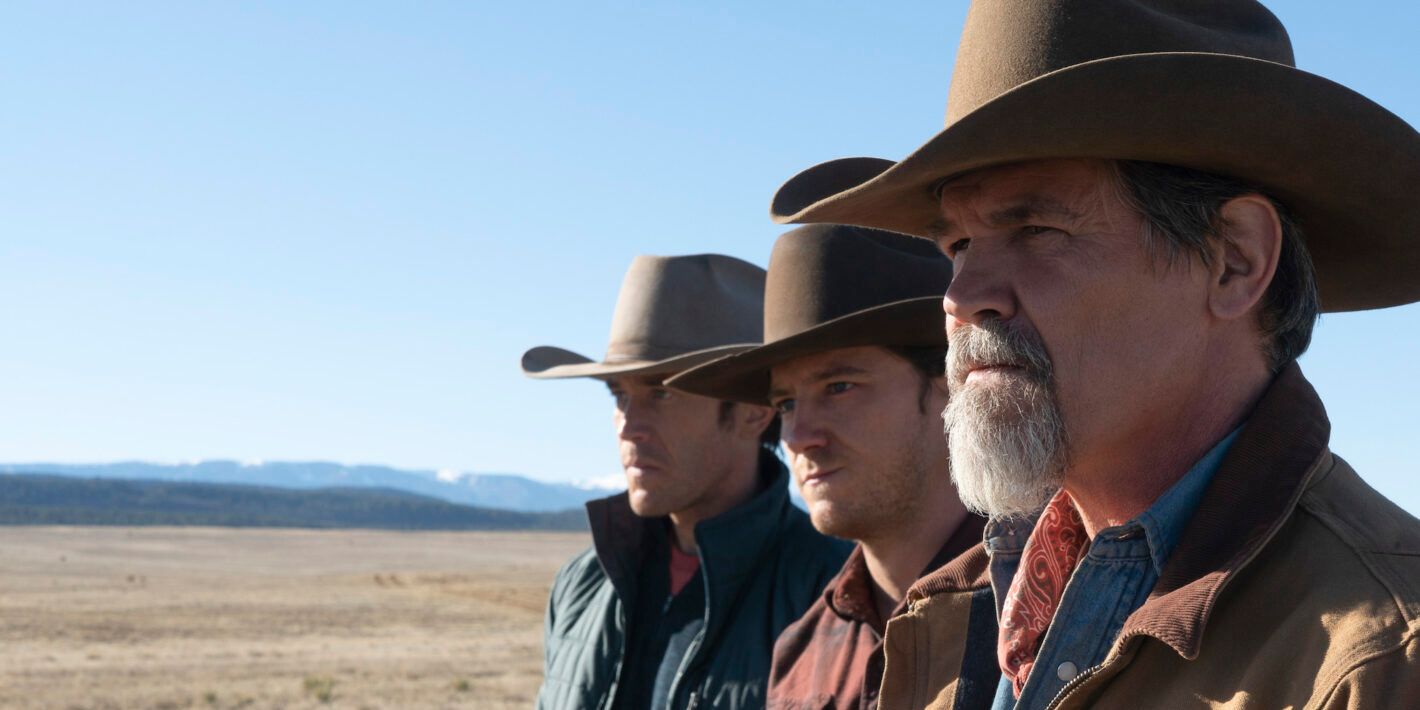 ‘Outer Range’ is a Western drama series created by Brian Watkins that follows the Abbotts, a family of ranchers led by Royal Abbott, who is recovering from a personal tragedy. However, their life turns upside down when a mysterious black hole appears in the middle of their land. The series blends mystery and supernatural elements to create a thrilling narrative that grapples with the definitions of known and unknown.

As the two-part series premiere wraps up, viewers learn a lot about the lives of the Abbotts but precariously little about the supernatural mystery they face. If you are looking for an explanation about the ending of ‘Outer Range’ episodes 1 and 2, here is everything you need to know! SPOILERS AHEAD!

The premiere episode titled ‘The Void’ opens with Royal Abbott (Josh Brolin) having a strange dream in the middle of the night. He wakes up at dawn and heads out to work on his ranch. The Abbott family comprises patriarch Royal; his wife, Cecilia; sons Perry and Rhett; and granddaughter, Amy. Amy’s mother, Rebecca, has been missing for some time, and the police haven’t been able to track her down. Autumn, a poet, arrives at the Abbott family’s ranch and convinces Royal to let her camp on their property.

Royal, Perry, and Rhett are searching for a couple of cattle missing from their herd when their neighbors, the Tillersons, send the Abbotts a notice claiming almost half of their land in a property dispute. After interacting with the Tillersons, Royal’s search for the cattle brings him to the Western Pasture. On his land, Royal notices a strange black hole that swallows anything without a trace. When Royal puts his hand into the void, he receives a brief vision of the future.

At night, Rhett and Perry have a drink at the local bar. While they discuss their lives on the ranch and personal issues, Perry gets into a conflict with Trevor Tillerson, and Rhett is forced to intervene. The situation escalates when the men brawl, leading to Trevor’s death. The men return to their ranch and reveal the situation to Royal. In the end, Royal decides to dump the body in the void but is caught by Autumn. After promising to keep Royal’s secret, Autumn pushes him into the void.

The second episode, titled ‘The Land,’ opens with the Tillersons searching for their brother. Meanwhile, Royal wakes up on the Western Pasture and returns home. Later, Autumn learns from Amy that Royal survived the fall. Royal encourages his family to keep the facade of their daily routines to avoid suspicion about Trevor’s death. He speaks with the Tillerson family patriarch, Wayne, about their land conflict. However, Wayne refuses to settle with Royal and wants his Western Pasture.

Thus, Royal decides to move his cattle away from the Western Pasture. After losing his cool at the dinner table, Royal warns his family not to speak with Autumn. In the end, Royal and Autumn have a conversation in the barn and swap secrets. While Royal asks Autumn to leave his property, she convinces him that she can help Royal figure out the truth about the void. However, she must first learn what he saw in the void and how he survived.

Outer Range Episode 2 Ending: What Did Royal See in the Void?

In the episode’s final moments, viewers learn the truth about Autumn’s motivations behind pushing Royal into the void. Autumn firmly believes that supernatural forces drew her to the Abbott family ranch. She is trying to figure out the meaning behind her connection to the land when she learns about the void and Royal’s secret. Therefore, she pushed Royal into the void to learn more about its nature. In the end, Autumn convinces Royal that she can be trusted with the knowledge about the void. Therefore, he shares what he saw inside the black hole.

A flashback shows that after falling through the void, Royal wakes up on his land, surrounded by several government officials, soldiers, localities, and his family members. A strange mining-like activity is being conducted on his land, and his wife reveals that their family lost the land. Moreover, she states that Royal has been dead for almost two years. Just as Cecilia warns Royal to run, Luke Tillerson shoots at him. The bullet hits Royal in the leg, thereby explaining the injury to his foot. Royal jumps into the void and wakes up on the other side, bringing viewers to the episode’s opening moments.

Ultimately, from Royal’s vision during his time in the void, it is evident that the black hole seems to have some time and space altering properties. In the first episode, viewers get a hint of the same when Royal dips his hand into the void. However, after falling into the black hole, Royal finds himself almost two years into the future. Given the tone and visual style of the scenes, it is likely that Royal merely had a vision of the future and did not actually travel forward in time. On the other hand, the injury to his foot seems to suggest otherwise. Nonetheless, the void’s mysterious properties of time and space alteration could provide some crucial answers about Royal’s mysterious past and Autumn’s purpose.