Pressure Cooker Season 1: Where Are The Chefs Now?

The only thing we might like more than a cooking show is a cooking show with drama. After all, who does not want their food to have a bit of a backstory? With Netflix’s ‘Pressure Cooker,’ the public gets to not only satisfy their craving for food and drama but also have a chance to meet with some of the most talented chefs out there. As the competition nears the end of a season, it becomes evident that culinary skills are not the only thing one needs to survive the ups and downs of this particular format of series.

The show’s very first iteration featured several skilled chefs who impressed the audiences with their talent and strategies while living under one roof. Though things might have been hard for the participants, it also helped them gain much fame. Naturally, people are eager to know where exactly the talented chefs are today. Luckily, we have just the answers you might need!

Where is Robbie Jester Now?

We are starting with none other than the winner of season 1, Chef Robbie Jester. Having started working with them at the age of 12, he went on to graduate from the Culinary Institute of America with flying colors. Apart from being the Chef de Cuisine of his family restaurant, he has been an integral part of the DuPont Country Club and Hotel du Pont. Over the years, he has also worked at places like Toscana Kitchen and Bar and 16 Mile Taphouse(now Stone Balloon Ale House). He was part of Maryland Governor Martin O’Malley’s Buy Local Challenges in 2009, 2010, and 2011 and also participated in the 2010 and 2011 iterations of Chefs by the Bay. Moreover, the reality TV star has also had the honor of catering events for people like President Joe Biden (during his tenure as Vice-President) as well as the King and Queen of Sweden.

Interestingly, Robbie made his television debut in November 2015 as a part of Food Network’s ‘Guy’s Grocery Games.’ He went to return for the show’s Redemption Tournament in April and May of 2016 and claimed the title of winner. He went on to star in ‘Beat Bobby Flay.’ As of writing, those eager to enjoy a taste of Robbie’s cooking can do so by visiting Pizzeria Mariana at 140 East Cleveland Avenue, Newark, Delaware. You can also get a glimpse of Robbie’s excellent culinary skills through his social media, where the chef likes to share cooking videos and food recipes. Robbie has been on cloud nine recently, thanks to his marriage to his lady love, Katelyn Jester, which took place on October 7, 2022.

Where is Mike Eckles Now?

Though Mike Eckles did not emerge as the winner, his skills as a culinary expert could not be denied by anyone. After graduating at the top from the Culinary Institute of America in Hyde Park, New York, Mike has worked with some of the best food establishments in Michigan. He started working with Coach Insignia before becoming a part of Forest, a James Beard-nominated restaurant, as a sous-chef. As of writing, the reality TV chef is based in Detroit, Michigan, and is thriving in his career within the cooking industry.

In fact, Mike presently serves as the Private Chef of Abode Fine Dining along with Marcus D’Onofrio, who holds the position of the sous-chef. The company was started by Mike and provides a high-class dining experience to its customers at their homes. One can book the Adobe team for any event in order to enjoy delicious food. Additionally, Mike also likes to share pictures of his eye-catching and mouth-watering food with his social media followers. When not cooking, the chef can be seen on the football field.

Where is Renee Blackman Now?

Hailing from Barbados, Renee Blackman’s interest in food began at a young age as she grew up watching her mother, Colleen, and grandmother, Hazel, working the magic in the kitchen. She worked hard to establish herself within the culinary industry and even became a part of an early culinary program in New York at the age of 16. Her flair for presentation, combined with bold flavors, has allowed Renee to be recognized as a respected chef.

Over the years, Renee has worked for establishments like Tommy Bahama, Union Square Hospitality Group, and Delta Sky Club at JFK International Airport. She also has vast experience within New York’s catering industry and has worked for establishments like Creative Edge Parties, Pinch Food Design, and Cloud Catering. Additionally, the chef has been recognized by James Beard Foundation and even had the honor of cooking in its kitchen.

Her skills have allowed Renee to cook for players from the NFL and the NBA. Moreover, she can also be seen on a variety of cooking shows, including Food Network’s ‘Chopped’ and ‘Kitchen Crash.’ The reality TV chef has also been featured in publications like Huffington Post, New York Post, and World Pride Guide. As of writing, she serves as the Executive Chef and Owner of Bleu Lemonade Parties, a catering company that serves in areas like New York City in New York and Los Angeles in California, to name a few. When not working hard, Renee can be seen spending time with her adorable dog, Papa Bleu.

Where is Sergei Nicholas Simonov Now?

Chef Sergei Nicholas Simonov was one of the semi-finalists who wowed the viewers with his cooking skills as well as strategizing. Based in Santa Barbara, California, the reality TV star works as the Executive Chef of LoquitaSB, located at 202 State Street, Santa Barbara. Like many of his fellow cast members, Sergei’s time on the Netflix series was far from his first television appearance. In fact, he was one of the cooks featured in Food Network’s ‘Chopped Next Gen.’ He is seemingly in a happy relationship with Joey, a talented Pastry Chef.

Where is Caroline Now?

For Caroline Gutierrez, the Netflix show was not just about cooking but also about coming up with the best social strategies with Sergei Nicholas Simonov. Her skills in and outside the kitchen have helped her gain many admirers. Hailing from Miami, Florida, Caroline has worked hard to gain respect within the culinary industry. Over the years, she has worked with different establishments in Los Angeles, California, along with places within Atlanta, Georgia, and the country of Spain.

The Le Cordon Bleu graduate has also worked with Michelin-star restaurants. As of writing, Caroline serves as a Private Chef for C+M alongside her husband, Matthew Ryder. The cooking duo is based in Atlanta and tied the know on January 18, 2020.

Where is Jeana Marie Pecha Now?

Having realized her passion for cooking at an early age, Jeana Marie Pecha is one of the most recognizable faces from ‘Pressure Cooker.’ The chef is the mind behind Omakase Por Favor: Cantina and Raw Bar, a food establishment that merges the Japanese raw food style with coastal dishes from Mexico to provide customers with a unique dining experience. As of writing, the company can only be booked for different events though they have plans to open a restaurant in the summer of 2023. An LA native, Jeana is now based in Sacramento, California. She also has a blog she uses to share a variety of content.

Where is Ed Porter Now?

Based in San Francisco, California, it seems like Chef Ed Porter’s skills are not only limited to the kitchen. The reality TV star is a huge fan of hip-hop music and has created some of his own tracks to celebrate his appearance on ‘Pressure Cooker.’ The culinary expert also seems to be a huge football fan and is never shy about sharing his thoughts about the same. He is seemingly also invested in fantasy football.

Where is Lana Lagomarsini Now?

As a professional Private Chef in New York City, Lana Lagomarsini’s skills in the kitchen are hard to beat. Through her company, Lana Cooks, she offers cooking services for dining events across the Big Apple and has been recognized by many as one of the leading forces within the field. Before her own organization, Lana worked with a multitude of establishments, including Charlie Bird, Restaurant Daniel, and the Black Chef Movement. In fact, she is still affiliated with The Culinistas and Fugal Foodie. She has also been featured in different podcasts like “Chefs Without Restaurants” and “Radio Cherry Bombe.”

Where is Brian Nadeau Now?

Brian Nadeau, certainly impressed many with his determination and skills. He presently serves as the Owner and Executive Chef of Cucina Rustica, an Italian restaurant located at 555 Atwood Avenue, Cranston, Rhode Island. Brian has recently also opened a ghost kitchen with his restaurant, called Nado’s Bomb Chicken Parm. Brian is happily married to Gina Nadeau, who also serves as an Owner and Operator for Cucina Rustica. The two welcomed their son into this world on August 24, 2021, and cherish every moment of familial bliss.

Where is Christan Willis Now?

Presently based in Atlanta, Christan Willis is a renowned Personal Chef and TV Personality. With more than 12 years in the hospitality industry, Christan was one of the chefs who took part in Flavors of Atlanta, a culinary event organized by the American Liver Foundation. Additionally, she was one of the cast members of ‘WAGS Atlanta’ season 1. and has been a part of Food Network’s ‘Cooks v Cons.’

Moreover, Christan was declared one of the 50 Most Beautiful Atlantans by Jezebel magazine in 2016 and has been featured in Brides Magazine. The chef was also invited on Fox’s ‘Good Day Atlanta’ to talk about her experience as a participant in the Netflix cooking show. She also has an online website that can be used to avail of her culinary services or enjoy her food blog. Combining her love for travel and food, Christan can often be seen traveling around the world and enjoying local cuisine at a variety of places.

Where is Liv Bin Now? 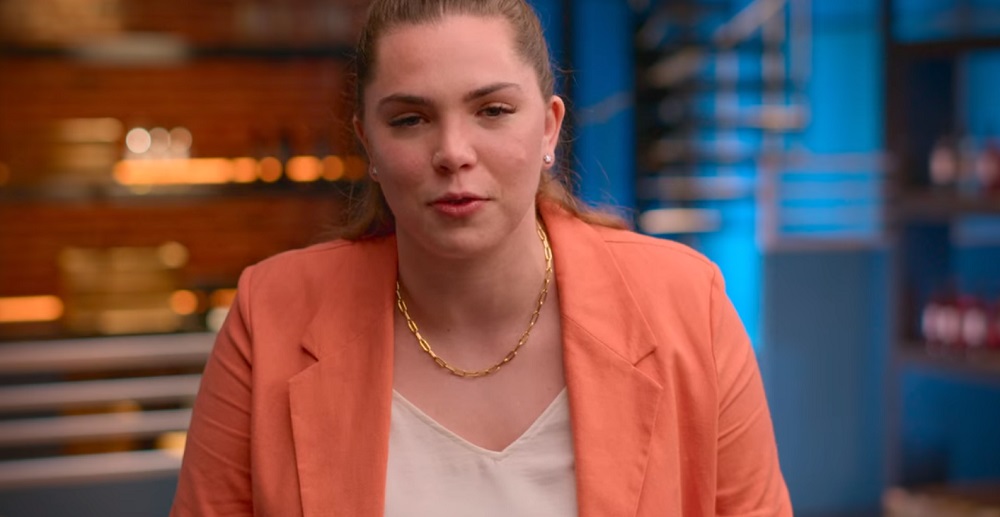 Next, we have Liv Bin, whose time on the Netflix show may have been brief, but it certainly left an impact on the viewers. As an Executive Chef at one of the best Italian delis in Melrose Hill, a neighborhood in Los Angeles, California, Liv’s expertise within the kitchen is certainly beyond any doubt. In fact, the 25-year-old is also one of the co-owners of the establishment. She hopes to become the youngest female chef to ever earn a Michelin star and is determined to do whatever it takes to achieve that goal.