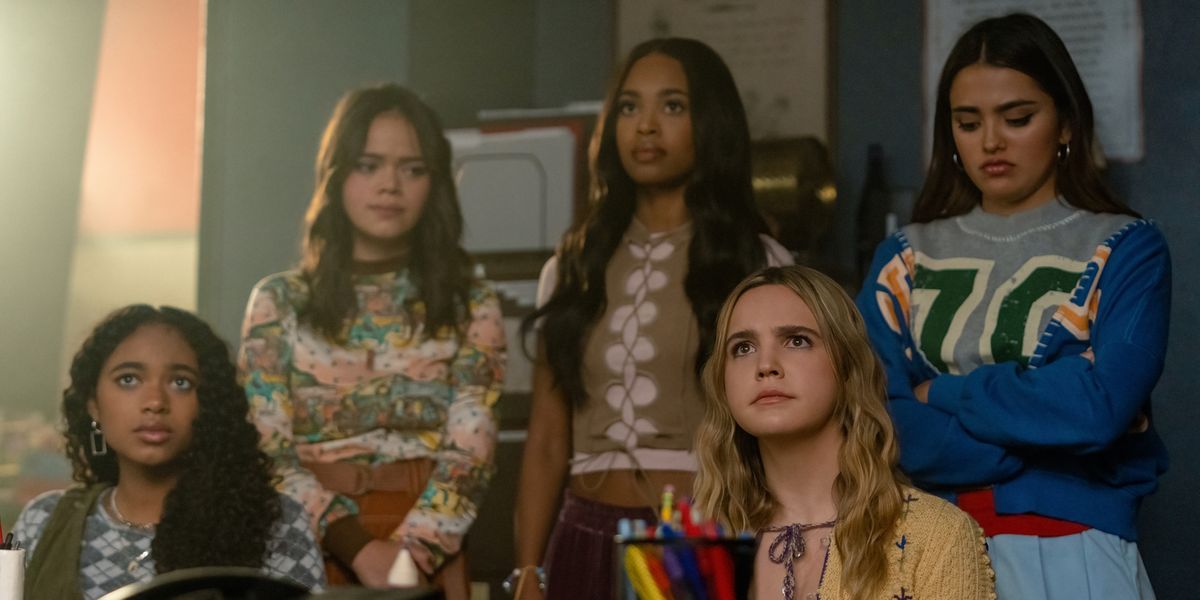 ‘Pretty Little Liars: Original Sin’ is a teen drama series with elements of murder mystery and slasher horror genres developed for television by Roberto Aguirre-Sacasa (‘Riverdale‘) and Lindsay Calhoon Bring. It is loosely based on Sara Shepard’s book series ‘Pretty Little Liars’ and its popular television adaptation of the same name.

Set in the gloomy town of Millwood, the series follows the intertwined lives of teenagers Imogen, Tabby, Noa, Faran, and Mouse, who find themselves on the target of the notorious serial killer “A.” If you are looking for answers about the new little liars’ secrets and the mysteries that plague them, here is everything you need to know about the ending of ‘Pretty Little Liars: Original Sin’ episodes 1, 2, and 3! SPOILERS AHEAD!

The series premiere, titled ‘Chapter One: Spirit Week,’ opens with a flashback to 1999. At a rave party, a teenager named Angela Waters desperately asks for help as her friends ignore her. Later, Angela jumps from the warehouse’s terrace and dies. Her death is ruled a suicide. Twenty-two years later, Davie, one of Angela’s friends, is dealing with the teenage pregnancy of her daughter, Imogen. Imogen is going through a rough patch with her former best friend, Karen, the daughter of Sheriff Beasley. The two have a falling out after Imogen allegedly kissed Karen’s boyfriend at a party. The girls bicker over the issue, only to learn that Davie has killed herself.

A few months after her mother’s death, Imogen lives with her mother’s friend Sidney Haworthe and her daughter, Tabitha “Tabby” Haworthe. At school, Minnie “Mouse” Honrada, Faran Bryant, and Noa Olivar are bullied by Karen, just as Imogen and Tabby. After a series of incidents frame the five girls for hurting Karen, they decide to retaliate against their bully. Imogen plans to run against Karen for the title of Spirit Queen at an upcoming school dance. Moreover, the girls plan to use an embarrassing video of Karen to get their revenge.

In the second episode, titled ‘Chapter Two: The Spirit Queen,’ the newly formed group of teen girls retrieve the video from Imogen’s mother’s house. At a screening arranged by Tabby at her workplace, The Orpheum, a movie theater, the girls play the video exposing Karen cheating on her boyfriend, Greg, by throwing herself at Tyler.

The embarrassment causes Karen to spiral out, and with her twin sister, Kelly’s help, she plans revenge on the girls. Kelly pretends to be Karen and removes her sister’s name from the Spirit Queen race while confessing to framing Imogen and Tabby. However, the sisters secretly plan to embarrass Imogen after she is crowned as Spirit Queen. However, the mysterious “A” attacks Karen and kills her. The five girls receive a text from “A” to keep quiet about their involvement in the murder.

Episode 3, titled ‘Chapter Three: Aftermath,’ follows the Little Liars (Imogen, Tabby, Noa, Faran, and Mouse) facing the repercussions of their actions that led to Karen’s death. The girls’ mothers get involved and plan to save their daughter from punishment. However, Karen’s father, Sheriff Beasley, intends to punish Imogen and Tabby for his daughter’s death. Hence, he offers Noa and the others a chance to turn on the two girls. However, Kelly comes clean to the police and school authorities about Karen’s plan to hurt Imogen. As a result, the girls do not face any severe punishment and are let off the hook with two weeks of detention.

Pretty Little Liars: Original Sin Episode 3 Ending: Why Is A Targetting the Girls?

In the final moments of the third episode, the girls gather around Karen’s grave to pay their respects. However, after they prepare to return home, they are shocked to see “A” stalking them. The brutish and mask-clad killer quietly watches the girls from a distance while sitting in his van. The Little Liars are scared by the stalker’s presence and freak out, ending the episode on a cliffhanger.

While it is unlikely that A is there to harm the girls, they could be trying to send a message. The figure is seemingly tied to the mysterious death of Angela Waters years ago. They were also present at the warehouse while Imogen was investigating it. Hence, it is evident that A’s mysterious reason for targeting the girls is rooted far deeper than the group’s feud with Karen.

A is likely avenging Angela’s death in their own twisted way. Therefore, the shadowy figure targets the girls tied to the case through their moms. Nonetheless, it is evident that Imogen, Tabby, Noa, Faran, and Mouse are all hiding their own dark secrets. For now, it seems like A’s goal is to torture and torment the girls while they prepare for the next phase of their plan.

It is unlikely that the girls are in the clear just yet and may struggle to confront their own mistakes as A’s twisted game continues. Hence, it will be interesting to see whether A gets to the girls first or if they unmask the killer and learn their true motives. Thus, the third episode’s ending sets up an exciting cat and mouse game between the resourceful Little Liars and their new nemesis, A. How Karen’s death fits A’s master plan also remains to be seen. Nonetheless, it is unlikely that the case will be closed soon.