Is Quinta Brunson Married? Who is Her Boyfriend? 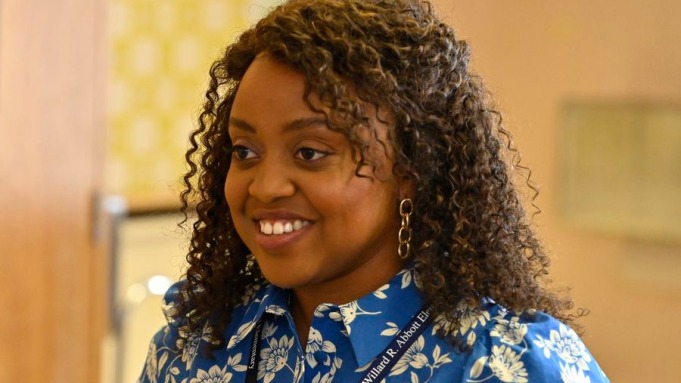 As a former BuzzFeed producer, Quinta Brunson has not only been a part of the entertainment industry for a while, but she’s honestly one of the individuals responsible for opening up the gates for young, black leads in mass-consumption internet-based content. In fact, she continues to be a trailblazer and has broken all bounds to achieve her dreams, as evidenced by ABC’s ‘Abbott Elementary’ and her other titles of actress, creator, comedian, and writer. So now, if you wish to know more about her personal and professional experiences, we’ve got all the details for you.

Born on December 21, 1989, Quinta Brunson grew up in Philadelphia, Pennsylvania, as the youngest of five siblings in a warm and loving household. She claims that her elder brothers and sisters are the reason she developed an interest in comedy and sitcoms, in particular, especially since she became a “quippy kid” to keep up with them. The fact that her family seemingly encouraged her to be who she is and continues to support her is just one of the reasons she can stay grounded while also achieving wonders. In other words, Quinta is close to them to this day.

The now 32-year-old attended the Charter High School for Architecture and Design before enrolling at Temple University. However, despite being a trained dancer and learning about a different vocation, she started taking improv classes during her sophomore year, only to drop out of college to pursue a career in comedy full-time. With that said, though, Quinta still enjoys dancing and even rock climbing. “I’ve been trained in dance all my life,” she said. “So, the gym just feels so structured and… I love rock climbing because it’s active. It’s fun, but you’re working out your back and stuff, and your arms.”

Not many remember this, but Quinta Brunson is the first individual who went viral on Instagram back in the day. Her series of clips entitled ‘The Girl Who’s Never Been on a Nice Date’ on the photo and video sharing platform gained unprecedented traction in 2014, giving her incredible prominence. From there, she went on to work at BuzzFeed, where she got to produce, act, and be a part of different kinds of short videos, which not only helped her grow as an artist but also allowed her to include others like her in the industry. She even developed two streaming shows with BuzzFeed Motion Pictures.

Quinta left the media company in 2018, only to star in ‘iZombie’ and HBO’s ‘A Black Lady Sketch Show’ while also doing voice work in ‘Lazor Wulf,’ ‘Magical Girl Friendship Squad,’ and ‘Big Mouth.’ Her dream, though, had always been to create a mockumentary series like ‘Parks and Recreation‘ or ‘The Office.’ Thus, when ABC picked up her idea for ‘Abbott Elementary,’ which she also leads by playing Janine Teagues, she knew she’d finally begun to make it. As if all this wasn’t enough, Quinta is even the author of ‘She Memes Well.’

From what we can tell, in order to easily unplug and relax, Quinta Brunson prefers to keep her personal life well away from the spotlight, which is why she has never even revealed her partner’s name. With that said, we do know that she’s currently engaged to be married and that she’d first met her fiance shortly after leaving BuzzFeed to start working on her own. Moreover, without any cozy captions or mushy romance, it seems like he does feature on her Instagram account from time to time.

“I’m fortunate because I have a person in my life—my [then] boyfriend—who doesn’t really use social media all that much, so spending time with him really makes me feel good,” Quinta told W Magazine. “He’s not a person who has to be as involved in social media as I do, so it’s nice to really hide the phone, put it in a drawer or something, and go do activities with each other. That sounds like sex; I meant to say do hiking. And stuff. You know? I feel like everybody needs a person like that.”