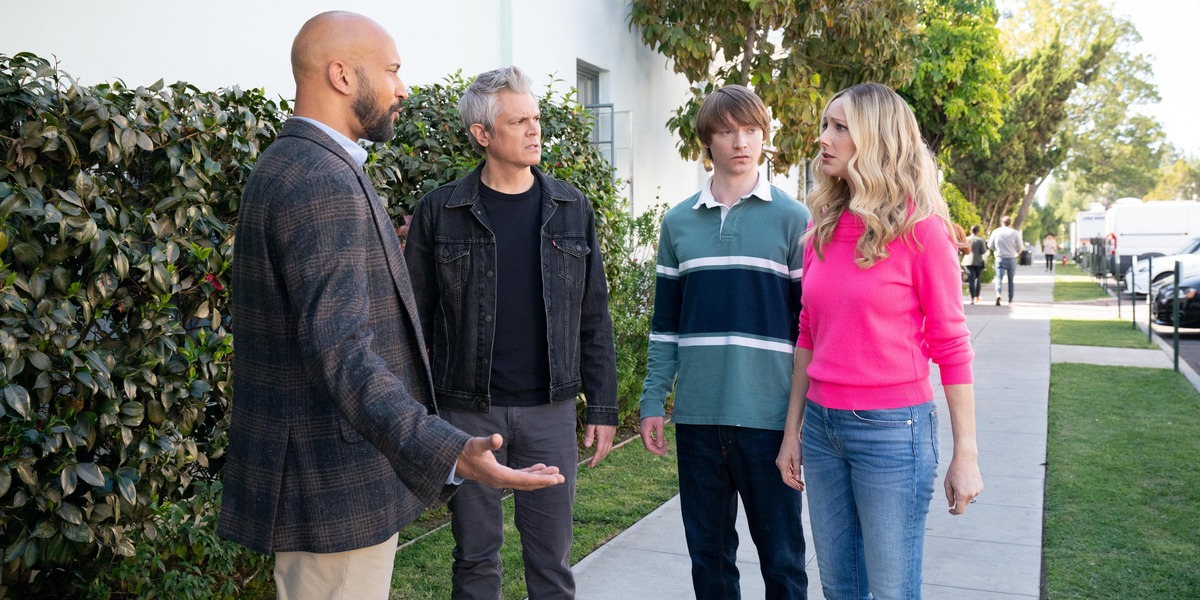 Hulu’s ‘Reboot’ is a comedy series created by Steven Levitan that takes a sarcastic aim at the reboot culture fleeting through Hollywood. The series follows the cast and crew of ‘Step Right Up,’ a hit 2000s sitcom that is being revived. However, the new showrunner, Hannah, clashes with the original show’s creator, Gordon. As a result, the production takes a new direction while the self-centered cast members become involved in their own petty conflicts. The three-episode premiere event introduced viewers to the colorful characters behind the rebooted show and the challenges they face in their day-to-day life on set. If you wish to catch up on the episodes’ events and ending, here is everything you need to know about the ending of ‘Reboot’ episodes 1, 2, and 3! SPOILERS AHEAD!

The series premiere episode, titled ‘Step Right Up,’ opens with Hannah, a writer who pitches Hulu executives a reboot of the eponymous sitcom from the 2000s. The sitcom stars Reed Sterling, Clay Barber, Bree Marie Jensen, and Zack Johnson, who play an unconventional family. Years later, the cast has gone separate ways after the show’s cancellation due to Reed pursuing a film career. However, Reed’s career has not panned out, and he is without work. Bree has married the King of a small Nordic country. Clay has been in and out of prison and survives by performing stand-up comedy. Zack is the star of several made-for-TV teen movies.

After the cast returns to film the edgier and more “realistic” take on the beloved sitcom, they learn that Hannah is quitting after the return of Gordon, the offensive and narcissistic creator of the original show. Gordon reveals that he will be crafting his own version of the reboot. Reed threatens to quit the show with the entire cast if Hannah does not return. After the other cast members reveal that they are reliant on the reboot for livelihood for various reasons, Reed leads the group to convince Hannah to return. In the end, Hannah reveals that she is Gordon’s daughter, and her father’s experiences with his step-family are the basis of the original sitcom. In the end, Hannah agrees to return as a showrunner and work alongside Gordon.

The second episode, titled ‘New Girl,’ sees the introduction of Timberly, a new cast member set to play the previously unknown daughter of Lawrence. Meanwhile, Clay explains to Zack that his mother, Susan, accompanying him to the set every day is an awkward behavior. However, Zack cannot be rude to his mother and asks Clay to tell Susan not to come to the set anymore. When Clay talks to Susan, it quickly leads to a series of hookups. Meanwhile, Gordon and Hannah discover that Timberly cannot act and are forced to make several changes to the script. However, Gordon and Hannah continue to clash over creative decisions. In the end, reed guides Timberly to perform her part, and Gordon delivers an apology to Hannah through the rewritten scenes.

In the third episode, titled ‘Growing Pains,’ Reed and Bree’s past romance is stirred after they film an intimate scene together. However, Bree struggles to deal with her divorce and bond with Timberly on the set. Zack learns of Clay’s relationship with Susan and warns his co-actor not to break up with Susan as she can react violently. As a result, Clay is forced to reconsider his relationship with Susan. Hannah and Gordon both hire new writers for the writers’ room. However, the generation gap in the writers’ room creates obstacles for the show.

Reboot Episode 1, 2, and 3 Ending: Do Reed and Bree Still Have Feelings For Each Other?

Ever since viewers meet Reed and Bree, it is clear that they share romantic feelings for each other. The co-actors play a married couple on the show and dated for three years before the series was canceled. However, they never addressed their feelings for each other as they went their separate ways and hadn’t spoken to each other in fifteen years. After returning to the set, Reed and Bree try to address their feelings and conclude that they have both moved on. Moreover, Reed is in a committed relationship, and Bree is married. However, as the narrative progresses, viewers learn that Reed is not serious about his relationship, and Bree is getting divorced. Hence, the door is open for a romantic relationship between them.

In the third episode, Reed and Bree film an intimate scene that stirs their romantic feelings for each other. During the kissing moment, Bree bursts into tears as if she hasn’t felt loved in a long time. As a result, Bree leaves the set and goes to a bar with Timberly. Later, Reed calls Bree and discusses the tense situation between them. Reed admits that he still has feelings for Bree. However, Bree states that she is in a good place and does not wish to pursue a romantic relationship with Reed. The episodes with the revelation that Bree hooked up with Timberly. The women seem to have a romantic interest in each other. Hence, despite still having feelings for each other, Reed and Bree are unlikely to end up together anytime soon.