Netflix’s ‘Tiger King‘ might take us deep into the life of Joe Exotic, and his rivalry with Carole Baskin, but a lot of documentation of Joe’s life has been carried out by Rick Kirkham. In fact, it is Kirkham’s incessant filming that helped Joe embrace and live up to his showman persona even better.

Throughout the docuseries, Kirkham gives us his views on Joe, and towards the end, he even regrets working for him. Naturally, you might be curious about where Rick Kirkham is, at present. We have got you covered in that regard.

Who is Rick Kirkham? 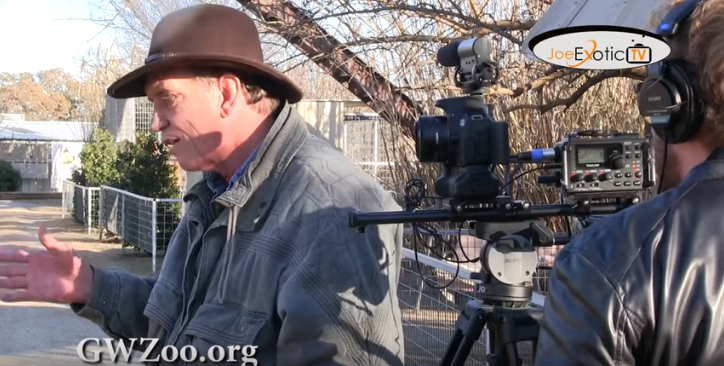 Rick Kirkham was born in Oklahoma City and was raised on various military bases. Rick was given a video camera when he was a teenager in the 1970s. In a way, this first led to his interest in documenting the world around him. Later, he moved to California, and was even a dancer on Dick Clark’s ‘American Bandstand’.

From Kirkham’s LinkedIn profile, it is evident that he studied Broadcast Journalism at the University of Central Oklahoma, from 1978-1981. Before earning his BS, he graduated from the American Broadcasting School- Oklahoma City, where he was studied from 1976-1977.

Rick moved to Las Vegas in 1985 and served as a crime reporter there. This is when his addiction to crack cocaine started. This marked the start of his drug addiction. He took a job with Inside Edition, a new television newsmagazine, after working for four years in Vegas.

Kirkham’s job in Inside Edition was to go on various adventures, which were documented in Inside Adventures, their segment. However, his drug addiction put a strain on his life, leading to him being fired from Inside Edition after years. It appears that he left the job in 1996.

In the 90s he also got married to Tami and was living in Plano. However, his wife hated the business which required him to be addicted to the news. It was not just Kirkham’s addiction to the news, however, it was also his addiction to drugs. Eventually, it all became too much, and he split with his wife. Before that, they had two sons Rick Jr. or Ricky and Dusty.

Kirkham is perhaps best known for ‘TV Junkie’, which documents his own life. While the family seems happy on the surface, one needs to look beyond to notice how drugs were eating away at Kirkham’s life. In 2000, when he became sober, he approached a friend to turn this raw footage into ‘TV Junkie’, as we know it.

In 2013, Rick was working as a news director for KFBB TV. However, he was at this job for less than a year. In the spring of 2015, Kirkham was working with Joe Exotic, when a suspected arson led to the death of several animals and resulted in Kirkham losing his equipment and footage. ‘Tiger King’ shows how things soured between Joe and Rick, leading in the latter’s departure.

Later that year, Kirkham was involved in a house fire, which nearly took his life. Since then, he has recovered and turned his life around.

Rick has moved to Bodo, Norway, where he works as a freelance reporter. His LinkedIn and Facebook profiles still list him working at RealReels as a film and tv producer, as well. He is married to his girlfriend, Kristin E Rosøy Kirkham, since April 13, 2018.

Rick describes himself as, “A journalist dedicated to educating our children and teens on the dangers of addiction. A filmmaker dedicated to creating documentaries that make a difference.” True to his words, he continues to educate the public about the dangers of cocaine addiction, as well as being addicted to other substances.

He has a Twitter account too, but his last post seems to have been made in 2015. Check it out here. You can also see one of Rick’s recent photos below, where he seems happy with his new family.

Rick stated, “I promise you from experience that life isn’t worth living with substance abuse, but the good news is that it is never too late to turn it all around.” It appears, he has been able to do just that.

Read More: Who is Sylvia Corkill?