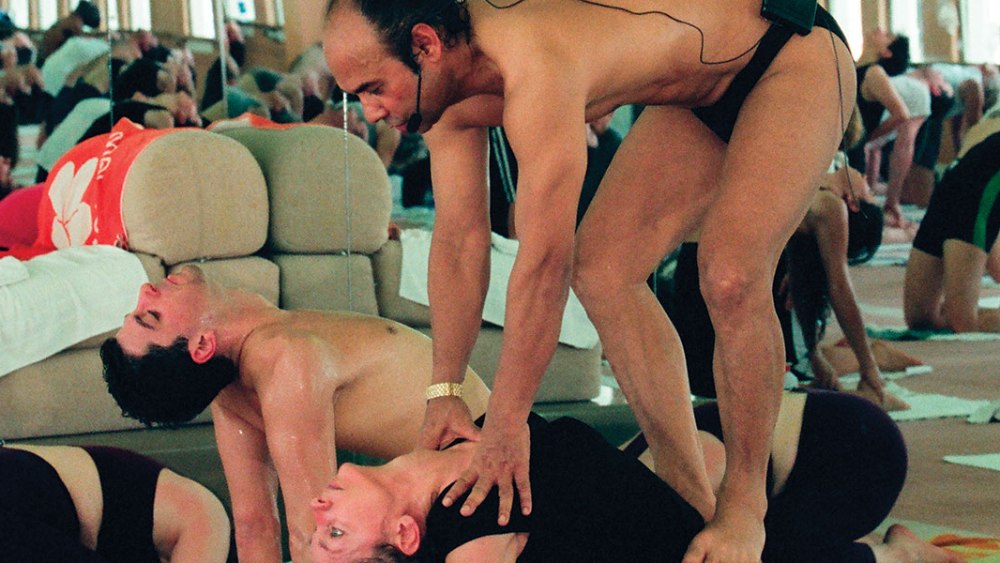 ‘Bikram: Yogi, Guru, Predator’ is, Academy-Award winner Eva Orner’s latest documentary which takes a look at the life and lies of Bikram Choudhury, the self-styled yoga guru, who was almost singlehandedly responsible for the start of hot yoga in America, and then the world. Bikram’s series of 26 postures and 2 breathing exercises became so popular that it was practiced by celebrities like Madonna, Frank Sinatra, Jason Bateman (when he was a child), and later influenced celebrities like George Clooney and Robert Downey Jr.

Bikram has been described as a tough teacher, who you either loved or hated. There were no two ways about it, but he did help a lot of people and everyone seemed to be devoted to him. Underneath the tough act, with the black speedo and flashy Rolex, lay a can of worms that would eventually topple Bikram’s entire empire. The man is a predator whose dissociation from reality made him see himself in a godlike image. As in such cases, he clearly did not know how to take ‘no’ for an answer, believing persistence would get him his results. It might have been the case in yoga, but it definitely was not the way to go in life. Read on about the women who brought down Bikram Choudhury.

Sarah Baughn: The First Woman to Speak Up Against Bikram Choudhury

Sarah Baughn began to fall in love with Bikram’s hot yoga techniques and devoted herself to that life. In fact, she credits Bikram’s teachings with helping her to cope with her scoliosis. However, things soon began to turn sour for her when she was summoned to Bikram’s office. The yoga instructor asked her what they should do about their situation, saying he had not felt that way about anyone and even stating that they should make it a relationship.

Sarah did not know quite how to respond, and what started off as an awkward encounter soon escalated to something much more sinister. During one of Bikram’s classes, when she was doing a yoga pose resembling a standing split, Bikram came up to her and split her apart even more. He would often do this to students to correct their posture or to help them push themselves. However, this time, he managed to press his body close to hers and whisper the same words in her ears, that what should they do about the two of them. After the incident, Bikram just carried on with his class.

After some time had elapsed, during which Sarah reached out to others, who suggested she separate the man from the teacher, she thought maybe Bikram’s attention had passed from her. This was a grave mistake to make, which she realized when she was called to Bikram’s room. A couple of other girls were there but they left while Sarah happened to be looking for her shoes. Once alone with her, Bikram literally trapped the young woman. He used his body to keep the door shut since it opened on the inside. He pressed against Sarah’s body at the same time claiming he would not let her go. This was followed by kisses on the neck and down her chest. Believing she would get raped, Sarah somehow managed to elbow him, as she slipped out from under him and escaped. Despite the traumatic event, she was inclined to wish him goodnight even as she left.

For the longest time, she did not know how to process her trauma. In the meanwhile, she got married and became a mother. While devoting herself to being the best mother possible, Sarah’s daughter told her that she wanted to be just like Sarah, that is, a yoga teacher. This kept Sarah awake at night, thinking that if her daughter went down that road, she would most likely get raped. Ultimately, it led her to speak up against Bikram Choudhury.

Sarah’s account is definitely harrowing, but Bikram’s despicable acts did not stop there. He went from almost-rape to actual rape in the case of Larissa Anderson. Sarah certainly opened the floodgates, and Larissa came forward saying how she was introduced to Bikram’s hot yoga, and soon became a part of his inner circle. He invited her to his Beverly Hills house, where she met Bikram’s wife Rajashree. Larissa grew closer to his family, helping Bikram’s children with their homework, eating together and doing lots of yoga.

One night at Bikram’s house, when his wife had retired, and his children were in bed, Larissa and Bikram were up watching a movie. Bikram used this opportunity to kiss her, even sticking his tongue in her mouth as he pushed her into the kiss. When Larissa backed away, Bikram seemed to get the message and stopped. He grabbed her hand and took her to another room, where Larissa expected him to apologize. Instead, he lifted her skirt, took off her underpants, took his own clothes off, and proceeded to rape her.

After the heinous act, he even told Larissa to remain silent and not mention a word of it to anyone since he intended to keep teaching yoga. He even went to the extent of finally giving Larissa her own studio so she could realize her dream of being a yoga instructor. When Sarah’s account started doing the rounds, Larissa knew it was time to speak up. Bikram’s brainwashing, if it can be called that, was so severe that even his victims were somehow devoted to him, despite the trauma he caused them. Larissa recounts kissing him on the forehead after the rape, and then going to her room in his house, hoping he did not come in again.

Mandeep Kaur Sandhu has a similar experience with Bikram Choudhury. She was called to his room one night, and once she entered, he proceeded to lie down and asked her to massage him with oil. While she started the massage, Bikram gradually began to direct her about where to put her hands. Eventually, she was asked to rub and massage his inner thighs, before he began to lead her to his privates.

When guidance did not seem to do the job, he grabbed her hand and placed it on his crotch. Mandeep immediately drew her hand away, saying that she saw him as her guru, and could not be the way he wanted her, with him.

Bikram has developed a notoriety for calling girls to his suite, where he behaves inappropriately with them. Jill Lawler was another survivor who came forward with her story. She was raped in a Las Vegas suite despite making it clear she did not want to engage in sexual activities with Bikram. She describes him as being super aggressive with his pants down and thrusting his privates in her face.

Despite the initial refusals, he kept persisting and a scared and worn out Lawler gave in as the sun was coming up, but she maintains that she did not give consent explicitly.

Pandhora Williams: Bikram Was Racist and Misogynist, Apart From Being a Predator

Pandhora Williams is a black woman who attended Bikram’s teacher training and complained about him not having any filter during the classes. What could be categorized as tough love, could easily cross the line to misogyny and abuse. In fact, when Pandhora confronted Bikram about yoga preaching a message of love, she was abused as the teacher said that he was not in the business of selling love. She was also referred to as a ‘cancer’ and was asked to get out of his class.

The confrontation was corroborated by a fellow trainee, who added that Bikram instructed other students to cease contact with Williams if they did not wish to jeopardize their teaching certification. Williams has also claimed that Bikram did not refund the money she paid for the course, which was over $10,000.

How Did The Women Respond?

Both Larissa and Sarah decided to take Bikram to court to get justice for the misdeeds against them. However, by then, Bikram had fled the country, absconding from the not-so-long arm of the law. Fearing that they would have to relive the trauma of their experiences, Sarah settled for a much smaller sum than she intended.

She spoke about this, saying that she knew justice was not being served, and she had rejected several settlement offers, determined to fight Bikram, but ultimately settled for an amount that was much lower than what she expected.

Larissa added to this, saying that she wanted the satisfaction of sitting across Bikram in court while exacting justice. However, since the man himself was not there, she did not see any point in going through her trauma again, especially since the LAPD had discredited her account when she first reported the crime, asking the usual litany of patriarchal questions like whether she was drunk and what she was wearing.

Pandhora, on the other hand, did actually file a lawsuit against Bikram, which made the man feel a bit of the heat for his many unforgivable crimes.

How Did Bikram Choudhury Respond?

Bikram Choudhury has not actually responded to any of these allegations directly. However, he has not shied away from media attention in his day, calling these accounts untrue. He went to the extent of saying that he did not need to rape anyone because women would be lining up to have sex with him from all over the world, as volunteers. He also made remarks about a single drop of his sperm being somewhere in the ballpark of a million dollars.

The classic narcissistic trait that predators often have is compounded with some disgusting statements that reflect the filth in this supposed yoga guru’s mind. On being asked the three things he dislikes, Bikram amended it to four in an interview, saying he disliked – cold food, cold weather, cold heart, and cold pussy.

In conclusion, Bikram Choudhury’s tale is a pre#MeToo incident that we are seeing play out in a post#MeToo world. The best way to describe him is perhaps as the yoga equivalent of Harvey Weinstein. After all, Bikram was at the top of his game and had the power to make or destroy careers, through his hot yoga teaching certification courses. He used this power to exploit, harass, and rape women, who were silenced, by the power structure of his organization that would oust them, not to mention the many blindly devoted fans.

Orner’s documentary shines a harsh light on the man who still does not have criminal charges against him, but very much deserves to face the consequences of his dastardly actions.