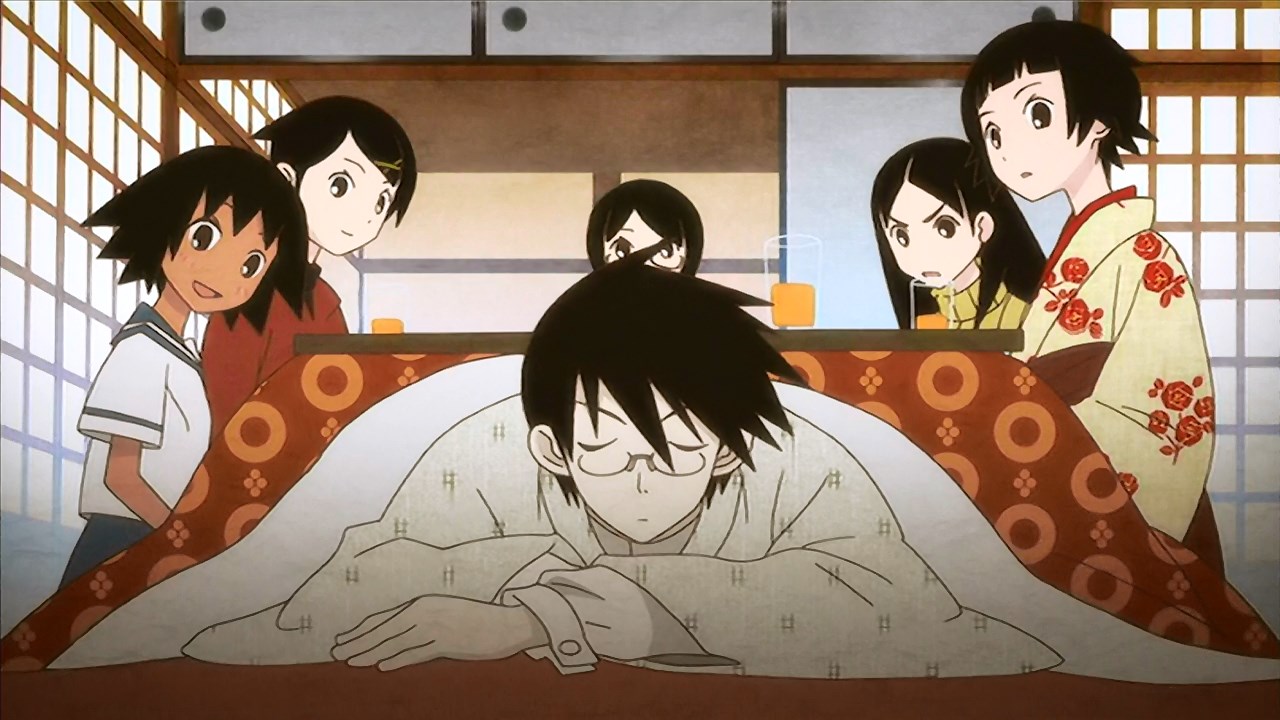 Even with the best comedy anime shows like ‘Gintama‘, you often very well know what you’re getting yourself into. You have a fair idea of the kind of jokes you expect from it. But in the case of ‘Sayonara Zetsubou Sensei’, you have to expect the unexpected. The jokes in it come out of nowhere and are so nonsensical sometimes, that you can’t help but laugh at the silliness of it. While the anime does cover a lot of serious themes as well, it never really comes off as a dramatic soap opera like ‘13 Reason Why‘. Instead, it uses its dark comedy to reflect upon its themes in a deep and significant way.

In a way, ‘Sayonara Zetsubou Sensei’ does qualify as a harem and also has quite a lot of fanservice. But even this side of the anime seems to be very unique as it is portrayed in a way that is very different from all the typical ones in the genre. For the most part of it, the show is all about the hilarious gimmicks of the characters and lacks a proper storyline. But for an anime like this, having a story is not all that necessary since its interesting characters are enough to keep you entertained.

When it comes to the technical side of it, Shaft Studio has done a decent job with its art style and consistency in its animation quality. The colors and bright lighting set the right tone for the comic scenes and while you’re watching it, you must be prepared for a lot of jokes being thrown at your screen or written in the background somewhere. A warning though; if you try to read all of these background texts, you’ll probably end up doubling the runtime of every single episode. Most of the OSTs have been composed by Hasegawa Tomoki and have a dramatic tone that fits well with the satirical vibe of the show. Overall, ‘Sayonara Zetsubou Sensei’ is so enjoyable that watching one season of it will not be enough for most viewers. The good news is that it has two more seasons after the first one and might possibly have more in the future. Speaking of which, to know more about its renewal, move on to the next section.

Sayonara Zetsubou Sensei Season 4 Release Date: When will it premiere?

The anime series adapts close to 100 chapters of the manga and while doing this, it actually skips a few chapters here then. The original manga has over 200 chapters by now, so clearly, a lack of source material is not an issue for the creators. Back when the anime was doing pretty well, the creators followed a very consistent pattern of its release by premiering one season almost every single year. But since the release of its final OVA, the show has been on a long hiatus. And now that almost a decade has gone by since the last of it was seen, it seems kind of obvious that Shaft Studio has moved on leaving it behind.

Having said that, there’s still a slight possibility of the show’s renewal only because of the abundance of the source material. But otherwise, nothing really seems to be in the favor of a new season. If we get any confirmations regarding ‘Sayonara Zetsubou Sensei’ season 4 release date, we will update it right here in this section.

Unfortunately, as of now, ‘Sayonara Zetsubou Sensei’ is not available for online streaming on any legit platforms. If we get any updates about its licensing and availability online, we will update it here.

‘Sayonara Zetsubou Sensei’ centers a young man named Nozomu Itoshiki who also goes by the alias Zetsubou-Sensei. He is a high school teacher and is infamous for his extremely negative outlook towards life. Quite often, during his lectures with his students, he preaches about life being a big disappointment that offers nothing but sorrow and even breaks down to a point where he tries to commit suicide.

As strange as he may be, his students are no less and are all quite different from most regular school teenagers. Some of these eccentric personalities include a mysterious girl named Abiru who often shows up with very severe injuries; Kiri Komori, a hermit who only wishes to stay at school all the time; the optimistic Kafuka Fura who, despite being the polar opposite of Nozomu, has a huge crush on him.

‘Sayonara Zetsubou Sensei’ is a modern-day satirical comedy about all the strange conversations that go on between Nozomu and his bizarre students, covering several themes such as different aspects of the Japanese culture and how it affects their lives.

Kafuka is a very optimistic student who manages to find a positive ground even during the grimmest situations. A hilarious example of this is when Nozomu tries to commit suicide by hanging himself on a tree, she claims that he is trying to grow taller. Kafuka Fuura is actually her pen name and her real name still seems to be a mystery. In some of her flashbacks, her name is shown as Akagi An in an attendance book. Much later, a major revelation is made about her character.

Nozomu is a skinny young man who seems to be in his early 20s. He has a pale complexion and is often seen in greyish kimono with geta sandals and socks. He has blue eyes and medium length jet black hair. Unlike Kafuka, he is a very negative person and gets stressed out for no apparent reason. He hates his life and also hates everyone around him to a point where he often tries to kill himself. But despite all the negativity that he surrounds himself with, he really cares for all of his students and tries to normally hang out with them even after school timings. Even his name has 13 characters which is considered to be an unlucky number by most. For some strange reason, every time he tries to commit suicide, he miraculously survives and returns to teaching his students the next day.

Kaere is a transfer student who suffers from dissociative identity disorder. Her country of origin is not specified in the series but she seems to have some serious problems with the Japanese culture and even files lawsuits against several Japanese characters. In the beginning, she appears to be American because of her reactions towards certain things but later her behavior gets weirder and it becomes hard to determine where she comes from. Her alter-personality is a well behaved Japanese girl named Kaede. She develops this personality because of the conflicting differences in the culture of Japan and her home country.