Who is Seahorse on The Masked Singer? 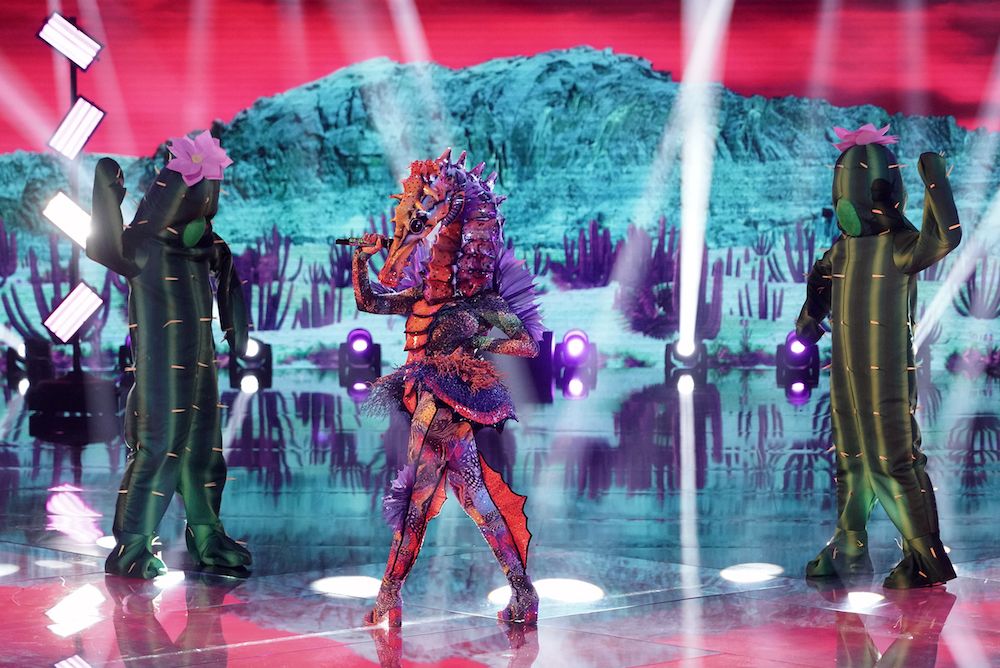 Season 4 of ‘The Masked Singer’ has commenced about a month ago, yet we have already seen some rather jaw-dropping performances! Clearly, the contestants are not messing around, and the sing-offs have everyone talking about who could actually be behind the mask. Plus, isn’t the fact that everyone joins the conversation one of the best things about the show? So, we figured that we’d take a shot at uncovering who Seahorse is!

From the get-go, a Western theme is established in Seahorse’s clues video. She states that she has always felt boxed in owing to her insecurities. But ‘The Masked Singer’ platform has given her an opportunity to stop fighting herself and expose the dauntless diva within. When it comes to the imagery used, a barren farm named “OK Coral” is shown. Seahorse is also seen in a tea party with two dogs, a frog, and a bird. Bubbles are used heavily while the scenes transition. Towards the end, there is a leafless tree and also a hog with warts on his stout. There is also a sign that reads “Emotion Ocean.”

Before we speak about the celebrity behind the mask, can we just appreciate how brilliant Seahorse’s performance to Rihanna’s ‘Only Girl (In The World)’ was? Even Nick Cannon called her a pop princess, and Nicole Scherzinger stated that Seahorse could be a potential winner of season 4. Well, we think that this diva is none other than Tori Kelly. Firstly, Tori Kelly did a song with country music star Chris Lane, called ‘Take Back Home Girl’ in 2018.

Moreover, the rainbow frog may be a very literal clue as she did sing ‘Rainbow Connection’ with Kermit the Frog. If you scroll through her Instagram feed, you will also find that she is a mum of two dogs. Her pets really resemble the dogs that were present in her clue package. As for the dove, it could be a nod to her song, ‘City Dove,’ or her Gospel Music Association Dove Award. She won this for a short-form music video called ‘I’ll Find You,’ in collaboration with Lecrae. Apart from this, the tug of war could be referencing the lyrics “Back and forth like a tug of war” in her song, ‘Should’ve Been Us.’

If Robin Thicke is right and the pig in the video is referring to Hogwarts and the ‘Harry Potter’ franchise, you’d be delighted to know that Tori Kelly is a huge fan of the film series. Furthermore, many have noted that she had uploaded a cover of Rihanna’s song on her YouTube channel that has since disappeared. But there are still other videos on the platform where you can hear her sing the same song, and for us, this was the most convincing piece of evidence.

Many felt that the words “a quiet place to hide” (used in the clues video) could have referred to Emily Blunt since she is a part of the movie ‘A Quiet Place.’ However, this seems to be a bit too obvious. But did you know that Tori Kelly has a Grammy-winning album called ‘Hiding Place?’ Furthermore, she has an EP called ‘Solitude.’ Although we won’t know who is behind the mask just yet, the hypothesis that it is Tori Kelly is quite strong as per the clues that have been presented so far.

Read More: Who is Serpent From The Masked Singer?