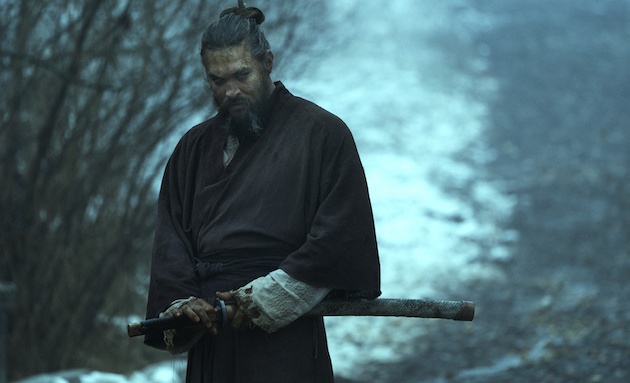 Steven Knight’s (‘Peaky Blinders’) dystopian action drama series ‘See’ tells the story of a world where humanity was nearly decimated due to a virus. The survivors lost their sense of sight. And it has been that way for the past 600 years. The series follows Baba Voss (Jason Momoa), introduced as a fierce chief of the Alkenny Tribe, and his desperate efforts to keep his sighted stepchildren safe.

In season 2, the audience meets Edo Voss (Dave Bautista), Baba’s younger brother and Commander-General of the Trivantian army, who seeks vengeance against his brother. Meanwhile, Baba’s wife, Maghra (Hera Hilmar), assumes her rightful place on the Payan throne after the actions of her sister, the former Queen Sibeth (Sylvia Hoeks), incites a war with the Trivantians. Here is everything you need to know about the ending of ‘See’ season 2. SPOILERS AHEAD.

‘See’ season 2 begins where the first season ended. Baba leaves Kofun (Archie Madekwe) with Paris (Alfre Woodard) and finds his way into the Trivantian City in search of Haniwa (Nesta Cooper), who was transferred to Edo’s custody by Jerlamarel (Joshua Henry). During her days as a captive, Haniwa becomes romantically involved with a Trivantian soldier, Wren, who can see as well. However, unlike Haniwa, she is not Jerlamarel’s child, irrefutably proving that sight is returning to the world. After being tortured by his brother, Baba successfully rescues Haniwa and escapes from the city with her and Tamacti Jun (Christian Camargo).

Meanwhile, Maghra and Sibeth arrive at Pennsa, a major city in Payan Kingdom ruled by Lord Harlan (Tom Mison). Sibeth declares that Pennsa will be her next capital, virtually usurping Harlan’s authority in his own city. Later, during a speech, she declares war on the Trivantians, blaming them for the destruction of Kanzua. She also announces that she is pregnant with a child who will have the sense of sight when he is born. The Payans have long considered vision to be blasphemy against their god. With this declaration, she legitimizes sight, but predictably, not many in the kingdom are happy with her.

When Baba arrives in Pennsa with Haniwa, Paris, and Tamacti Jun, Kofun is already there, and Maghra has married Harlan for political gain. Maghra tries to prevent the impending war between the Payans and the Trivantians from happening, but the peace summit she so painstakingly organizes gets sabotaged by Sibeth’s agents.

Realizing that her sister is unfit to rule, Maghra removes her from the throne with Harlan and Tamacti Jun’s help. The finale, titled ‘Rock-a-Bye,’ revolves around the brutal Battle of Greenhill Gap. One side emerges as a clear victor, while the other suffers a devastating loss. Afterwards, Baba makes certain decisions that will have long-lasting consequences for his family.

See Season 2 Ending: Who Wins the Battle of Greenhill Gap and How? Is Edo Dead?

The Payans and their Hidden Tribe allies win the Battle of Greenhill Gap against the Trivantians. Before the arrival of the tribes, the Trivantians has a clear advantage, but the tribes bring some balance to the equation between the warring factions. They don’t like the Payans as their Witchfinders have hunted and killed the tribal people for generations. However, they hate the Trivantians because they are even more brutal than the Payans and practice slavery.

Tamacti Jun’s decision to pick Greenhill Gap as the battleground proves to be an excellent one. The Payans and their allies use narrow passages to lure their enemies toward the positions where others are waiting with spears, swords, and other weapons.

Slowly but surely, the Payans and their allies gain an advantage. Eventually, they have killed enough Trivantians that they have more fighters than their enemies. The decisive moment in the battle comes when Wren and several Trivantian soldiers are lured to a frozen lake covered by snow. The Payans break the ice, and all the Trivantians trapped there drown in the lake below, except for Wren.

Yes, Edo is dead. Realizing the battle is lost, Edo calls to his brother, playing the same whistle that Baba gave him when they were younger. Baba has no intention to fight his brother, but Edo knows that his life is over either way. After this loss, the Trivantian Council will execute him the moment he steps into the city. The brothers fight, and Edo dies in Baba’s arms.

Yes, Paris is most likely dead. In the end sequence, she comes to Sibeth’s chamber after learning from the guards the former queen had been crying out in her sleep. She checks Sibeth and the baby before declaring that Sibeth’s womb is intact and the baby will arrive when it is due. Earlier, after learning that Kofun is the child’s father, a furious Maghra told Sibeth that the baby would be taken away from her after its birth.

Acting like a concerned mother, Sibeth reels Paris in. She pretends to plead to Paris, asking her to help Kofun in raising their child. However, the moment Paris relaxes and tries to assure Sibeth by saying that she will be there for the baby, the latter pulls out the hidden blade from under her skin and slices open Paris throat. As Paris dies, Sibeth declares that she will kill the child before handing it over to anyone else.

Paris has been an integral part of the story since the very beginning. She knew Jerlamarel before he went to Kanzua and later helped Maghra bring Kofun and Haniwa into the world. She was the one who ensured that the children would know how to read and write when Maghra was absolutely against the idea. She was also one of the few survivors who made it out of the valley alive when the Witchfinders came. She has often served as a primary catalyst to move the story forward.

Now it seems that after her death, it will become yet another thing that Kofun and Haniwa will have to cope with on the threshold of their respective adulthood. It will be particularly difficult for Kofun, who hasn’t yet come to terms with his feelings for Sibeth. He knows he should hate her, but a part of him probably has held on to his original feelings for the former queen.

Why Does Baba Leave? Is the War between the Payans and the Trivantians Over?

After the battle is over and his brother dies in his hand, Baba starts to feel that he is more lost than ever. Since the births of Kofun and Haniwa, protecting them has been his life’s mission. In the Battle of Greenhill Gap, they demonstrate to him that they have truly grown up. They are warriors now and don’t get squeamish as people die around them. This probably makes Baba feel that his family doesn’t need his protection.

Moreover, they are now the Prince and Princess of the Payan Kingdom as children of Queen Maghra. An entire army is there to protect them. The current circumstances make Baba wonder about his future role in his family’s life. Despite Maghra’s assurance, he starts to question whether he has anything to contribute to the lives of his wife and children. The answer he comes up with must have been discouraging, as it gave him a reason to leave.

The war with the Trivantians has physically and emotionally destroyed Baba. But he endured all that because of his children. He even killed Edo, something he had sworn that he would not do. And he is now done with fighting and done with war. However, unfortunately, war is never done with people who are good at killing others. As Harlan correctly says, the war between the Payans and the Trivantians is far from over.

Oloman, the oldest among the Jerlamarel’s children, has been working for the Trivantians since Edo killed his father. In the season 2 finale, it is revealed that he has developed a chemical explosive, which is probably a variation of gunpowder. The Trivantians can cause widespread devastation with it, including in Payan. And when that inevitably happens, Baba will likely have to return to save his family.