Where to Stream Star Wars? 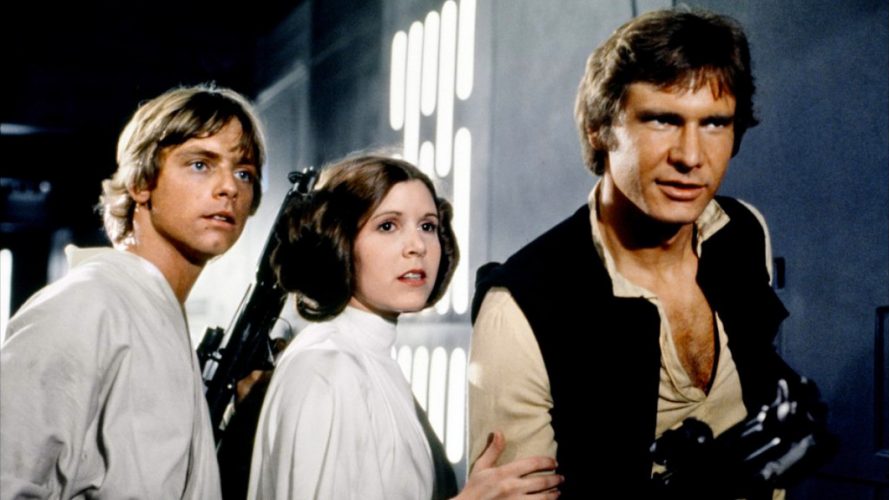 Once upon a time in a galaxy far far away, one of the greatest space sagas unfurled, that would go on to influence numerous space movies and become one of the world’s biggest franchises. Obviously, we are talking about ‘Star Wars‘ — but only the first three movies which came out, that are popularly known as the original or classic trilogy. Created by George Lucas and produced by Lucasfilm, the movies include ‘Star Wars‘ (1977), ‘The Empire Strikes Back’ (1980) and ‘Return of the Jedi’ (1983). Together, the films deal with the Galactic Civil War where the Rebel Alliance tries to free the galaxy from the evil grasp of the Empire. At the same time, we see Luke Skywalker, who leads the archetypal hero’s journey as he undertakes the quest to become a Jedi and ultimately faces the Sith Lord Darth Vader.

The entire universe has been crafted with care and the movies provide a deeply immersive experience. Naturally, now you must be wondering where you can watch the ‘Star Wars’ trilogy. But before we tell you that, let us tell you a little bit about the movies.

What is Star Wars About?

When ‘Star Wars’ begins, the galaxy is already plunged in a civil war with the Empire gaining the upper hand due to the Death Star, a colossal space station capable of destroying planets. Princess Leia, who secretly works for the rebels, steals the plans of the Death Star but is captured. She manages to send a message to Obi-Wan Kenobi. However, the message is intercepted by Luke Skywalker, who finally meets Obi and realizes his true destiny is to become a Jedi. The two embark on an adventure to join the fight against the Empire and help Leia. This is where they meet Han Solo, the swashbuckling pilot of Millennium Falcon, and a smuggler. The fight is taken to the Empire and though Obi has to sacrifice his life, fighting Darth Vader, the heroes manage to gain the upper hand as Luke uses his Jedi force to destroy the Death Star.

In ‘The Empire Strikes Back’, the plot grows more action-packed as the Empire actively searches for the members of the Rebel Alliance, seeking to destroy them for having destroyed the Death Star. Luke takes off to train under Yoda. Meanwhile, Leia and Han have their own adventures but end up being captured by Darth Vader finally. The movie introduces one of the deadliest bounty hunters we have had the pleasure of seeing in movies – Boba Fett. Luke returns to help Han and Leia, as there is a wonderful face-off with Darth Vader. Vader cuts off one of Luke’s hands and there is an iconic scene where he reveals himself to be Luke’s father. The battle is interrupted as Luke and Leia manage to get away from the clutches of the Empire, and plan to live to fight another day. However, before that, they have to save Han, who has been turned over to Fett.

‘Return of the Jedi’ is marked by the mission to save Han first. Luke and Leia try to save him from the mobster, Jabba the Hutt, who has frankly been a thorn in the side over the movies. Finally, after a fierce battle, they manage to defeat him and escape. Luke finds out that Yoda is dying and the Jedi mentor confirms that Darth Vader is Anakin Skywalker, Luke’s father. The Empire seems intent on building another Death Star, with the Emperor himself overseeing the process. The Rebel Alliance realize that the opportunity is too good to pass up. They decide to attack the Death Star before it becomes operational, in order to turn the tides of war in their favor.

Luke decides to confront Vader as his father and tries to get him to change sides. However, Vader has other plans. He intends to bring Luke over to the Dark Side and even takes him to meet the Emperor for the same reason. This is where Luke breaks out in a battle against Vader and gains the upper hand. The Emperor encourages him to kill Vader and take his place. However, Luke refuses and declares himself a Jedi. Naturally, the Emperor is not pleased and tortures Luke, but Anakin is unwilling to let his son die and kills the Emperor and himself in an attempt to save his son. Meanwhile, the rest of the Rebel Alliance manages to destroy the Death Star, which actually turns out to be operational. With the Empire defeated, the Rebel Alliance emerge as victors, and Anakin is redeemed as well. The epic space saga is truly memorable and is a must-watch; so without further ado, let us tell you where you can stream the ‘Star Wars’ trilogy.

Is Star Wars on Netflix?

Unfortunately, the original ‘Star Wars’ trilogy is not on Netflix. However, the platform has an excellent collection of movies and television shows that sets it apart as a premier content provider. Thus, you can check out ‘Solo: A Star Wars Story‘, which details the many adventures of the smuggler Han Solo, who ended up playing a vital role in the battle against the Empire.

Is Star Wars on Hulu?

Hulu has an amazing collection of movies and television shows. The platform keeps making smart additions to stay ahead of its competitors. The ‘Star Wars’ trilogy is not available on Hulu, but you can check out ‘Starship Troopers: Traitor of Mars‘.

Is Star Wars on Amazon Prime?

Amazon Prime has a wonderful collection of movies and television shows that can perhaps only be bested by Netflix. The ‘Star Wars’ trilogy is not available as is, but you can purchase all the three movies at $19.99 each. Check out ‘Star Wars‘, ‘Return of the Jedi‘ and ‘The Empire Strikes Back‘.

Where Can I Stream Star Wars Online?

No subscription to the major platforms? No worries. You can stream the first part of the trilogy on Sling and Fubo Tv. Obviously, you need to have subscriptions to these platforms.

Where Can I Watch Star Wars Online For Free?

Well, freeloaders are in luck because you can use the free trial period of Fubo Tv to watch ‘Star Wars’. However, there is no legal way to watch the other two parts of the trilogy for free. Moreover, we would like to urge our readers to pay for all the art that you consume.