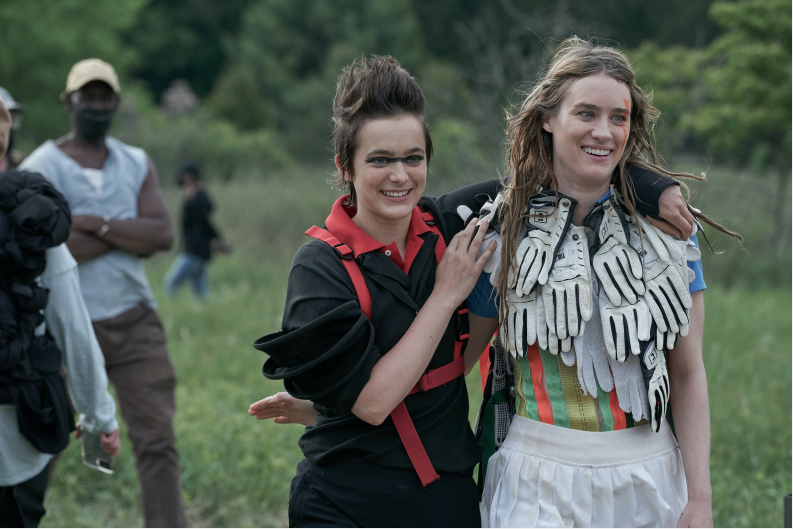 ‘Station Eleven’ is set in the throes of a deadly pandemic that wipes out most of the human population. The opening episodes introduce us to a world caught unaware, with people swiftly dying as chaos reigns. As the story gets deeper in episodes 4 and 5, we meet key characters at different points in time, showing us the eclectic society emerging from the calamity.

The advent of a strange new cult also adds a sinister edge to the narrative, which has so far been relatively light-hearted despite the apocalyptic setting. There are some crucial elements that these episodes add to the story, so let’s take a closer look at ‘Station Eleven’ episodes 4 and 5 to make sure we’ve picked up all the details. SPOILERS AHEAD.

Episode 4 opens with the Travelling Symphony on their way to the settlement called Pingtree, where their former director, Gil, resides in an abandoned country club. When the troupe arrives, they are frantically beckoned by the old director and his wife, Katrina, who have had their grandchildren kidnapped. The perpetrator is a mysterious man known simply as “The Prophet.” Gil recounts that the latter repeatedly came to the country club under various pretexts until he finally kidnapped Gil’s grandchildren.

Alex then reveals to Kirsten that she has also received an invitation from the Prophet to leave the Traveling Symphony and join him. As the only one born after the pandemic, she seems to be alienated by the artists’ troupe, especially its sense of repetitive traditions. Kirsten tries to calm Alex down, but the latter rides away on her horse after an argument. That night, the country club is visited by two young children with mines strapped to their chests. When an unsuspecting Gil goes close to them, they cling to him tightly and set the mines off, killing him.

We are then taken back to the day after Arthur’s death (officially Day 1 of the pandemic), where his grieving widow gets on a flight with his son, Tyler. She meets Clark, Arthur’s friend, who is transporting the late actor’s body back to Mexico. Soon, however, their flight is canceled, and everyone is stranded at the airport as deaths across the world continue to accelerate. After the first few days of being stuck inside the airport and watching society collapse, most passengers give up trying to leave. When an airport janitor disguises himself as a federal agent and leaves with a third of the people, promising them better lives elsewhere, Clark uses the opportunity to rally the remaining passengers.

Station Eleven Episodes 5 Ending: Why Does Tyler Burn the Plane? Is He Dead?

Soon enough, Clark, Elizabeth, and a former airport security guard named Miles become unofficial leaders of the people stuck in the airport. They decide to take advantage of their sheltered location and establish their lives in the airport. By day 10, Tyler reports that the internet has gone down. The young boy then finds a living man in one of the stranded planes and attempts to rescue him.

The rest of the people at the airport are horrified and become convinced that Tyler and his mother are infected. The two are then forced to spend a month locked inside an airplane, during which time Tyler incessantly reads a comic left to him by his father, which is titled ‘Station Eleven.’ When mother and son are finally released after a month, they are forced to wear masks.

Clark, meanwhile, decides to set up The Museum of Civilization in the airport. He makes amends with Elizabeth, but Tyler seems to have taken the forced quarantine to heart and remains sullen. In the closing moments of episode 5, he sets one of the planes on fire and watches as his mother and Clark come running out to it on the runway, thinking Tyler to be dead.

Thus, Tyler does set the plane on fire but then fools Elizabeth and all the others into thinking that he has perished in the inferno, which, in fact, seems to be his motive all along. We see him grow increasingly distant from his mother and Clark. Though Tyler doesn’t speak much, he very pointedly questions the point of reestablishing society and even wonders what would happen if he deleted the last remaining information about Capitalism after the internet collapses.

Thus, as the youngest person at the airport, Tyler seems to be at odds with everybody. The final straw is when the man he rescues is shot, and he and his mother are subsequently forced to quarantine despite very clearly not being sick. Thus, Tyler doesn’t think much of the adults around him and realizes he will be better off on his own. It is also worth noting that the young boy is heavily inspired by the titular comic book left to him by his father.

Who is The Prophet?

The Prophet is a shadowy man who is set on wiping out the generation of pandemic survivors so that the world is populated only by those born after the pandemic. He seems to think that the survivors carry lies and that the new world deserves a new population free from the mistakes of the past. Thus, the Prophet is known for kidnapping young children, as he does with Gil’s grandchildren. However, he is also extremely violent, as is evidenced by how he kills Gil using children with mines strapped to their chests.

At the end of episode 5, it is revealed that Tyler is the Prophet. Apart from explaining the eclectic behavior and background of the mysterious character, it also explains how the Prophet keeps quoting the ‘Station Eleven’ comic. This had earlier confused Kirsten since she believed she had the book’s only copy. However, as we see in the extended flashbacks, Tyler was also given a copy of the comic by Arthur and thus seemingly knows its mysterious message by heart.