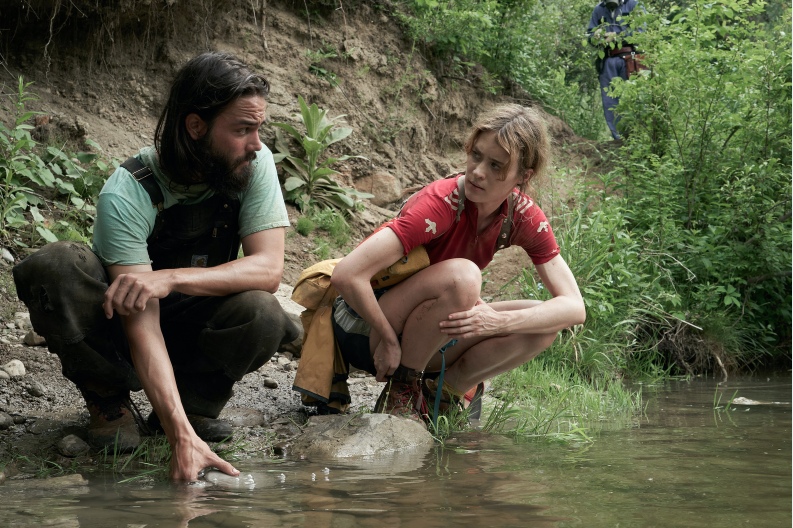 ‘Station Eleven’ episodes 8 and 9 make some crucial connections between the show’s multiple timelines and give us some of the most decisive moments yet. The tenuous social structures formed by the survivors seem to be in jeopardy. The Prophet continues to sow chaos even as he reconnects with his past and fulfills a long overdue mission. Meanwhile, Jeevan and Kirsten’s story also takes an unexpected turn, making the latter’s future uncertain. There’s a lot that goes down in the two chapters, so let’s dive into ‘Station Eleven’ episodes 8 and 9 and see what’s what. SPOILERS AHEAD.

Episode 8, titled ‘Who’s There?’ opens with Elizabeth at the Museum of Civilization, where the Travelling Symphony has finally agreed to perform. After surviving an attack from the Bandanas and being nursed back to health by Tyler (a.k.a. The Prophet), Kirsten finally arrives in Severn city. She and Tyler are accompanied to the Museum of Civilization where Clark, the eccentric head of the museum, tests their claims of being actors with the Travelling Symphony. After performing a piece from the Station Eleven comic, which both of them know verbatim, Kirsten and Tyler are let into the museum’s quarantine zone.

Kirsten soon realizes that the museum’s hospitality is only a guise for Clark to imprison the Traveling Symphony. She tries to convince the rest of the troupe, but her cries to rally and escape the enclosure are met with an unenthusiastic response. Most of the other members of the artists’ troupe are impressed by the comfort and safety of the museum (built inside a defunct airport) and agree to spend the winter there.

Tyler has plans of his own and steals an old remote module from the museum’s “artifacts.” Well versed with the secret passages in the airport from the time he spent there as a child, he helps Kirsten bid farewell to Sarah, who claims to be suffering from a “broken heart” (and recovering from a heart attack). Tyler then leaves and is accompanied by Kirsten. Once outside the airport building, he uses the stolen remote to blow up the airport tower, where most of the museum’s artifacts are housed.

Episode 9, titled ‘Dr. Chaudhary’ follows Jeevan and Kirsten during their first winter after leaving the apartment. Irritated by her constant reading, Jeevan makes a split-second decision and throws away the Station Eleven comic that Kirsten keeps with her at all times. After an argument, he returns to retrieve the book but is brutally attacked by a wild animal.

Jeevan wakes up to find himself surrounded by a group of pregnant women who have seemingly nursed him back to health. Led by Terry, the women have converted an abandoned store into a “birthing center” to help new would-be mothers give birth. Jeevan initially panics and tries to get back to the cabin where he left Kirsten when he left to retrieve her comic.  However, an injury-related amputated foot and the severe winter blizzards make it impossible for him to leave. Eventually, Jeevan settles in and begins to help Terry, who desperately needs a doctor to help with the deliveries.

Despite having no experience as a doctor, Jeevan spends the next few weeks helping the women at the birthing center. Longing for connection, he forms a bond with one of the women there and leaves with her. She takes him back to his now-empty cabin, where Jeevan bemoans losing Kirsten. Episode 9 then closes twenty years on, where we see an elderly Jeevan by the lakeside with the woman he left with and a young girl.

The melancholy ending of episode 9 follows Jeevan but remains ominously silent about the fate of his young companion, Kirsten. Though we know that she survives and eventually joins the Travelling Symphony, the young girl is left alone in the dead of winter when Jeevan disappears for weeks. The only clue about her departure is the compass that Jeevan finds when he returns to their empty cabin. It is made clear that Kirsten left it there for him to find, telling us that she left the cabin on her own accord, likely in search of supplies.

Though we don’t know where Kirsten is headed, she has a distinctly feral demeanor when she finally meets Sarah and the Travelling Symphony sometime around Year 2. Thus, it seems like Kirsten spends some time living in the wild after getting separated from Jeevan. Her proficiency with weapons and setting traps, which is made apparent multiple times in episode 9, also foreshadows that Kirsten spends some time living on her own in the wild.

Is the Travelling Symphony Imprisoned at the Museum of Civilization?

The Travelling Symphony is kept “quarantined” at the Museum of Civilization before their supposed performance. However, Clark is then struck by the potentially mutinous thoughts that the play could inject into the minds of the youngsters who live at the museum and cancels the performance. He also tells Elizabeth not to allow the Travelling Symphony to leave since they now know the museum’s location and could bring others to it.

And so it turns out Kirsten is right, and the Travelling Symphony is, in fact, being held hostage. Distracted by the comfort and apparent safety of the airport-turned-museum, the group members fail to notice they are being held against their will. Of course, things are likely going to get more heated when they learn that their performance has been canceled. However, seeing as how dangerous things are getting, many of the Travelling Symphony members might just choose to remain “imprisoned” in the safety of the museum.

Is Jeevan Alive? Does He Get Married?

Though Jeevan’s life hangs by a thread after being attacked by the wild animal, he makes an unlikely recovery. The closing scenes of episode 9 show us an elderly version of Jeevan twenty years after the pandemic, signaling that he has survived. In fact, it seems like Jeevan and the woman he left with from the birthing center have spent the interim years together and also seem to have a young girl.

It is possible that Jeevan married the woman, and the two had a daughter. However, we are only shown platonic interactions between the two, making it difficult to confirm whether they are romantically involved. In either case, it looks like Jeevan finally found a companion his own age, which he wished for during the time he spent with Kirsten.