Where is Supermarket Stakeout Filmed? 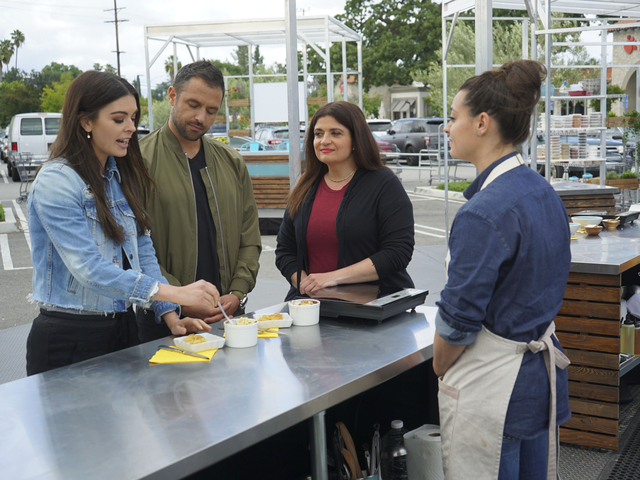 Shows with the theme of cooking have performed surprisingly well for a medium that doesn’t allow consumers to taste anything. It wouldn’t be wrong to say that there is now an entire industry focusing on food and television. Multiple kinds of productions from food travel ones to cooking competition ones exist, with newer series adding something unique of their own. ‘Supermarket Stakeout‘ is a cooking competition reality show with a distinctive twist.

‘Supermarket Stakeout’ revolves around a cooking competition that is held in the parking lot of a supermarket. Unlike other cooking competition shows, the ingredients required aren’t readily provided to the contestants. Instead, they are given a budget and tasked with buying the necessary items for cooking from customers who have left the supermarket. Only a limited stock of ingredients is provided.

The show is hosted by the food celebrity, Alex Guarnaschelli. She also appears in shows like ‘Chopped‘ and ‘Iron Chef America.’

‘Supermarket Stakeout’ is set in multiple locations. Each episode, the show is set in a different supermarket’s parking lot. The supermarket itself features on the show. Hence, it is natural for viewers to wonder which supermarkets have been seen on the television series.

The second season of ‘Supermarket Stakeout’ is set and filmed in multiple different places in various states such as Nevada and Arizona. For instance, filming was carried out at Smith’s Marketplace in Las Vegas and Fry’s Supermarket in Phoenix, according to local sources. Glendale, California was another location where filming was carried out, as seen in the second post attached below (Ignore the “New York City” location tag as it was mostly applied because of the place that the post had been posted from. Guarnaschelli’s other posts during the time have the same tag).

‘Supermarket Stakeout’ is set and filmed in multiple, different supermarkets in the first season of the show, mostly in California. For instance, filming was carried out at Lazy Acres Market in Hermosa Beach, California for the third episode.

Shannon & I on the set of Supermarket Stakeout in the Lazy Acres parking lot. One of the chefs bought eggs from me for $20 as I was exiting the store!!! It was a dessert cook off & she won… https://t.co/zU4DSWaAWe

Supermarket Stakeout films at the GELSONS of Thousand Oaks.

Have a look at some photos shared by Alex Guarnaschelli: