Review: Sweet Girl is a Rudimentary Fugitive-On-The-Run Narrative With an Unoriginal Plot Twist 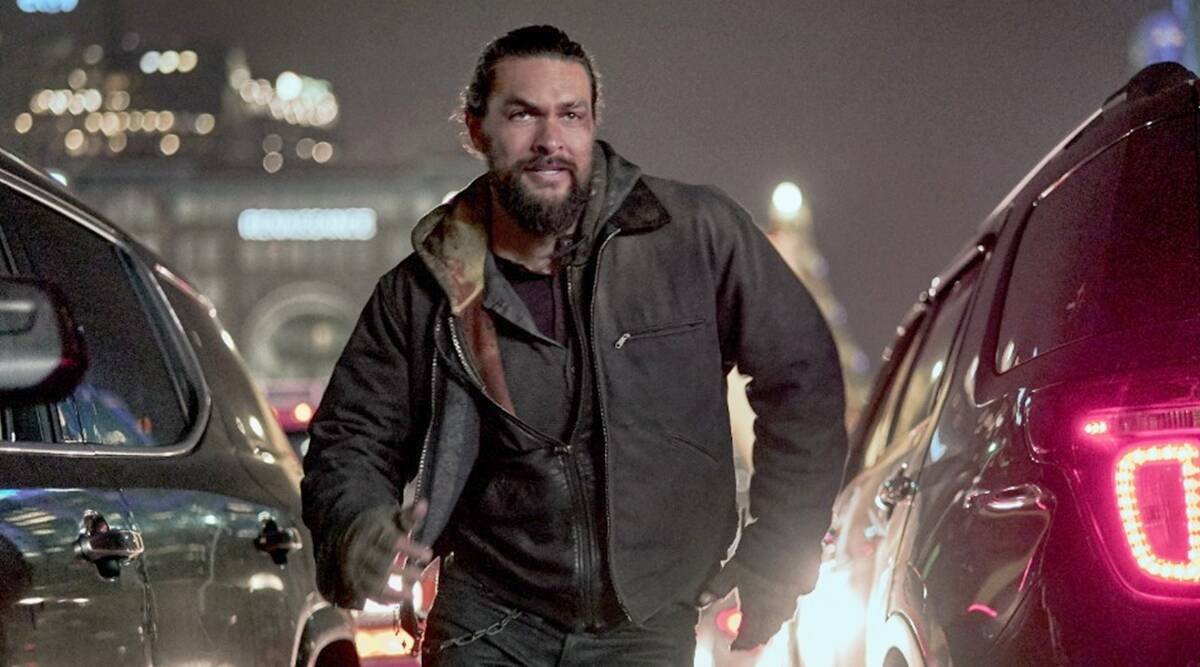 This goes without saying that the politics that surround the entire landscape of the hypocritical healthcare system and the pharmaceutical industry is ripe with heady material. Directors like Steven Soderbergh (Side Effects & Unsane) have explored it through genre convenience, albeit with mixed results. With Sweet Girl, producer turned debut director Brian Andrew Mendoza plots his fugitive-on-the-run story around one such pharmaceutical conspiracy.

Ray Cooper played by Jason Momoa is a dedicated and honest family man. The opening sequence shows us a family of three on a vacation in the wilderness and the love between them is distinctly visible. This is until sadness sets in. A few years down the line, Ray’s wife Adria Arjona is re-diagnosed with cancer. Only this time, it seems fatal and the doctors are relying heavily on a new, cheap drug that has extremely potent efficiency.

But the stars are not aligned for the Cooper family this time. Simon Keeley (Justin Bartha), the CEO of Biopharma – the pharmaceutical company that has come up with a special drug, is indefinitely stopping production. Ray, who was clearly dependent on this leeway for saving his wife’s life is outraged. So much so that he calls up Keeley on live television, holds him responsible, and threatens to hunt him down and kill him.

Regrettably, his wife dies and he is left to fend for himself and his mature, young daughter Rachel (Isabela Merced). The two of them are trying to piece their broken life together, but Ray is unable to move on. Not getting justice for his wife’s death has created a roadblock on his way to grieve properly. Months pass by when Ray suddenly receives a call from a journalist who is trying to uncover the truth behind what went down with the pharmaceutical company and a few rich nationals.

As Ray figures out what is really happening, another mishap leads to the journalist’s death. The hired contract killer named Amos Santos (Manuel Garcia-Rulfo) also ends up fatally wounding Ray and Rachel in the cross-fire. This further enrages Ray and his life goes totally haywire as he spends 2 years of his life trying to understand the root of all the problems in his life. The rest of the film follows Ray and Rachel fleeing the clutches of FBI agents and the shadows of the contract killer who are in their way of getting some sort of redemption.

The rest of the film plays out within the context of a typical fugitive-on-the-run narrative, closely followed by one of the FBI agents played by Lex Scott Davis trying to help Rachel make sense of her tragedy.

Coming to the film’s need to address the issues that prevail within its universe, Sweet Girl strays far away from it. In the lure of being a thriller that engages the audience, the film uses the political context and the conspiracy that pushes it forward as mere plot points.

It neither takes time to slows down to let us understand the two central characters better nor has a proper sense of how trauma and grief actually work. I mean, I understand that it’s different for some people and violence can be like an outlet to these emotions, but the film’s idea is to indulge these two people in as many cross-fires as possible; so as to give this story a sleek edge is really lazy.

While there’s nothing wrong with that, this lack of proper plot progression really hampers the film’s heavy subtext. In a way, the film glorifies its protagonist’s choice of taking revenge without holding him responsible. It almost absolves him of it too. However, thanks to the sequence in the second act where Ray and Rachel meet up with Amos Santos at a diner, this blatant misstep is numbed down considerably.

But then again, the film ploys a really unoriginal plot twist into the mix that derails the film in the third act. A lot of groundwork is needed for such a twist, but director Brian Andrew Mendoza fails miserably in that context. Sweet Girl has three accredited screenwriters, which might be the reason why there is no sense of cohesion in the film’s more intimate moments.

A whole lot of the third act also puts excessive baggage on Isabela Merced’s shoulders. The young actor tries her best, but a lack of proper guidance from the writer’s perspective puts her character in a strange mix of polar-opposite personality traits. She is unable to balance this wobbly persona and the film just drowns itself post that.

Brian Andrew Mendoza has been a frequent collaborator with Jason Momoa, with the duo recently wrapping up the Netflix show Frontier quite recently. It shows that the two have a great rapporteur with each other since Mendoza manages to evoke a moving performance out of Mamoa. As a husband and a father who is angry with the establishment, while trying to make sense of the grief that surrounds him, Mamoa’s turn as Ray Cooper is believable. Also, shout out to Manuel Garcia-Rulfo as the mercenary. He turns in a menacing performance.

Praises are also due to the amazing stunt work here. I particularly liked that Mendoza goes for more hand-to-hand combat rather than making bullets fly. The action sequence, for most of the film, are well choreographed and intense. Sadly, not much in Sweet Girl works, and that is sad because Mendoza claims that he is inspired by No Country for Old Men and Fight Club. While you can clearly see bits and pieces of both those great films here, Mendoza’s work becomes instantly forgettable.