The Big 4 Ending, Explained: Who Got Petrus Murdered? Why?

The Netflix action comedy movie ‘The Big 4’ is directed and co-written by Timo Tjahjanto. Starring Abimana Aryasatya, Putri Marino, and Lutesha in central roles, the Indonesian film explores the lives of four trained assassins. After the murder of their adoptive father, they run and hide on an island. That is until his real daughter shows up, looking for answers. The Indonesian movie features violence, bloody deaths, and cutthroat action sequences to keep the viewers hooked.

The movie focuses on many pivotal themes, including the unity between siblings, revenge for a loved one’s death, and finding eye-opening answers that explain one’s resentment. With lots of twists, turns, and unwarranted murders, the story gets increasingly exciting as it reaches the end. If the ending of ‘The Big 4’ has left you scrambling for answers, then look no further because we’ve got you covered! SPOILERS AHEAD!

‘The Big 4’ introduces us to the Big 4 in style as they rescue children from a human trafficking ring. Petrus adopts and trains the talented kids (Topan, Jenggo, Alpha, and Pelor) to become assassins of the highest order. Majorly, the Big 4 targets and brings down evil people and organizations. They have their own form of justice. In doing all of this and helping the Big 4, Petrus somewhat neglects his biological daughter, Dina.

Dina becomes a police officer and gets upset by her father as he does not attend the ceremony. However, when she gets home, she finds Petrus murdered. At that moment, she resolves to avenge her father’s death and works relentlessly to find the murderer. On the other hand, the Big 4 are devasted to hear about Petrus’s demise. They abandon the troop and go on to settle in Bersi, where they first met Petrus.

After three years, Dina finds her father’s photograph with four little kids. She sees the mention of Bersi and decides to visit the island to get some answers. She meets Topan and presses him to answer her questions. In the meanwhile, Topan deals with the gunmen, who follow Dina to the Paranais Villa. Topan and Dina meet with Jenggo and Pelor so that the gang can get together to navigate the situation carefully. The gunmen, now larger in number, keep following them and stage a massive fight.

The gunmen belong to Antonio, one of the largest arms dealers in Southeast Asia. Antonio is a cold-blooded killer. Subsequently, the four of them escape death at the hands of Antonio and get to someplace safe. They decide to go to Alpha for more weapons and a safe haven. However, even Alpha’s hideout is not out of reach for Antonio and his men. The killers find the Big 4 and Dina soon after. The ultimate showdown between the warring criminals forms the movie’s exciting climax.

The Big 4 Ending: Who Got Petrus Murdered? Why?

Petrus is murdered in the first act of the movie by a killer in a helmet. The mystery and suspense revolving around the murderer of the Big 4’s mentor and Dina’s father furthers the movie’s plot. When Topan and Antonio come face to face, Antonio admits to killing Petrus in cold blood. He tells Topan that he killed Petrus because he cast Antonio away. Petrus dumped Antonio as he was not who Petrus wanted him to be. Antonio exacted his revenge by killing Petrus. Subsequently, he resolves to become more powerful and take down the Big 4.

Petrus’s first adopted child was Antonio. Petrus trained him with utmost dedication and determination. However, Antonio’s ambition and cold-blooded manner make Petrus realize his mistake. Without a rhyme or reason, Antonio could kill anyone he wanted. He had no mercy, compassion, or ability to tell good from the bad. Petrus trained Antonio to be a skilled knife wielder. Thus, Antonio is handy with knives and picks them as his weapons of choice. Antonio wanted to be in the Big 4, but due to the unpredictable characteristics, Petrus knew better than to include him on his journey for justice.

However, Antonio also reveals that he did not act on his own accord. He received orders from his boss to execute Petrus. In the end, we learn that Hassan gave the orders to kill Petrus. Hassan is Dina’s boss, a Police Captain, and most importantly, Petrus’s good friend. We see him during Dina’s ceremony, and she even greets him as an uncle. Thus, it shows how close Petrus and Hassan were back in the day.

Considering Hassan is a law enforcement officer, he must have disliked Petrus training kids to become fighters and deadly assassins. The main objective behind the Big 4 is to fight injustice and protect innocent people. Hassan could see it as an infringement of his duties and decided to end Petrus’s life. Hassan betrays his friend, Petrus. Furthermore, keeping in mind the concepts of greed and corruption in the modern world, Hassan could have done this for money as well.

In his years of working as a vigilante, Petrus must have collected his fair share of enemies. Any one of them could have contacted Hassan to get the job done. However, it is heartbreaking to see Hassan throw his friendship aside for anything else. A true friend is always bigger than any money or morals in the world.

Moreover, Hassan is not the sole perpetrator of Petrus’s death. There is a lady wearing a spider eye patch with him. She seems to be another skilled assassin who knows her way around a sword. The unknown lady is dangerous and claims to have unfinished business with Topan. As Antonio points out, the Big 4 are not the only pupils of Petrus, maybe this lady is one of the other trainees.

Suranto is the birth name of Antonio Sandoval. Antonio gave himself various cool-sounding names to leave behind his past and become a whole new person. He also calls himself the Prince of 1001 knives and the Scorpion of Southeast Asia. By changing his name, Antonio believes he can get rid of the horrible childhood experiences that haunt him. He was Petrus’s first son who got training to be a member of the Big 4. However, his arrogance and ambition lead to his downfall. Petrus casts him away as he is unworthy of fighting for justice.

Moreover, when Topan teases Antonio with the name Suranto, he gets very agitated. Old memories seem to come up bubbling in his mind as soon as he hears his birth name. Suranto is a child who had no friends and was always alone. Whereas Antonio is a famous arms dealer and a feared name in the industry. He feels better with his self-given name just as he feels proud of the reputation he gains over the years. The name Suranto brings up insecurities and Antonio’s worst childhood memories. Thus, he leaves that name and gives himself not only a new name but also a new identity.

Why Do The Big 4 Leave Dina?

Consequent to defeating Antonio and his men, Dina calls the cops in the area to report the numerous crimes. She goes back to being a law enforcement officer and does her duty. Dina honors the oath she took and sticks to her word. On the other hand, the Big 4 seem to be back to their old ways. Hiding from the police and completing their mission in stealth is no difficult task for skilled assassins. 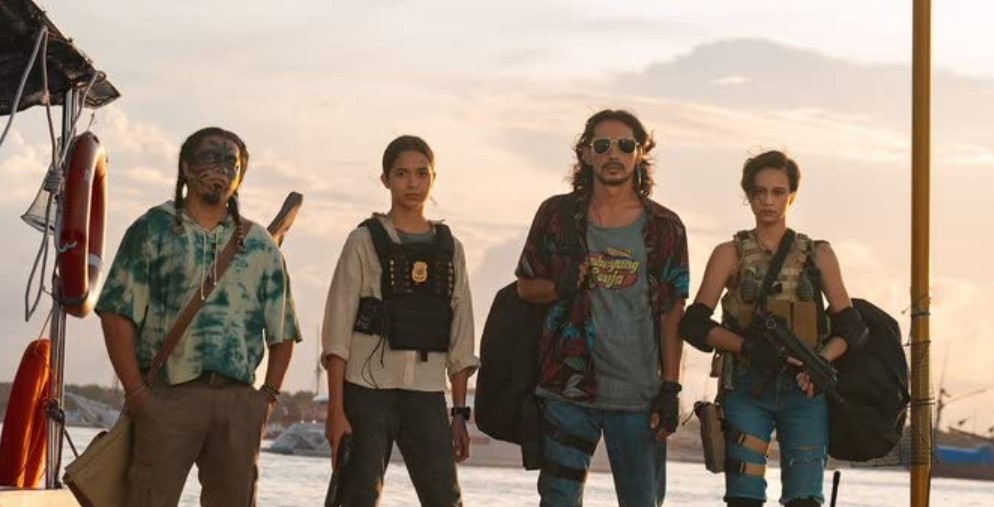 Dina grows fond of her father’s estranged adopted children. She understands the reasons why the Big 4 do what they are trained for. Nonetheless, she cannot turn her back on her profession. When the cops arrive on the island, the Big 4 escape to not get caught. Topan kisses Dina as a ruse to handcuff Dina to the window. They then get enough time to get to their vehicle and vanish without a trace.

Although the Big 4 leave Dina in the Villa, they promise to meet soon and reconnect after a while. The gang gets attached to Dina after their collective mission to avenge their father’s death. The Big 4 and Dina are differentiated by actions and profession but united by the love for their shared father.

Read More: Where Was Netflix’s The Big 4 Filmed?