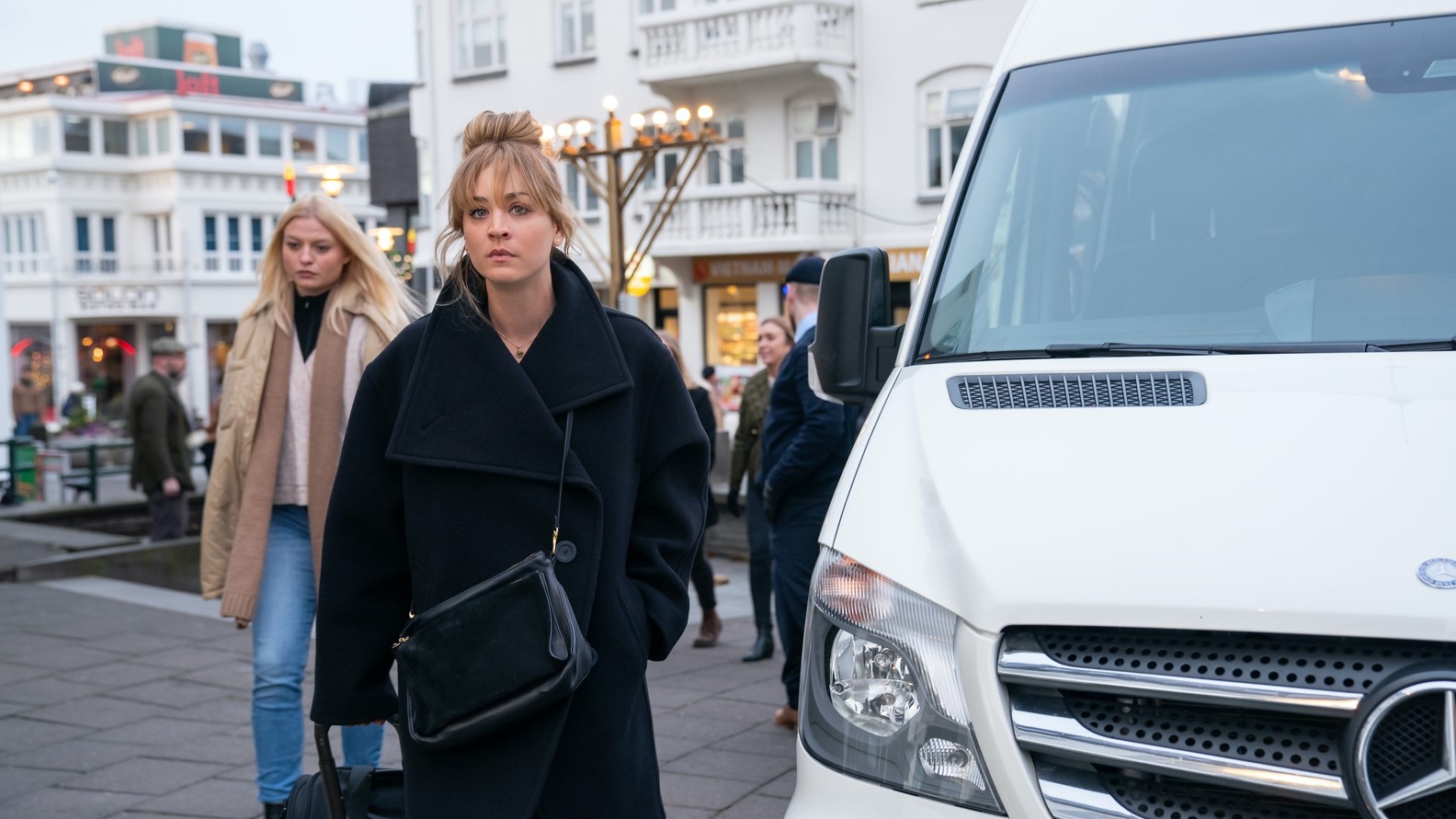 In season 2 episode 5, ominously titled ‘Drowning Woman,’ Cassie’s (Kaley Cuoco) life utterly unravels. She moved to Los Angeles for new beginnings, but her old habits resurface as she once more finds herself in the midst of an international conspiracy. Her relationship with her seemingly perfect boyfriend ends, and she falls off the wagon for good. The darker aspects of ‘The Flight Attendant’ are often ignored due to how it is packaged, especially with the breezy and fast-paced plot, Hitchcockian soundtrack, and the sitcom queen Kaley Cuoco portraying the main character. But in this episode, the writers decide to lay it all bare. Here is everything you need to know about the ending of ‘The Flight Attendant’ episode 5. SPOILERS AHEAD.

Episode 5 begins as Cassie wakes up in Ben’s office. In the previous episode, the party-loving version of her suggested that they should implode their life, and sleeping with her CIA handler is a good place to start. She sighs in relief, noticing that the bottle of alcohol from the previous night remains untouched. She also sees that Ben has a CIA file on her psych evaluation. As always, Cassie lets her curiosity get better of her and flips through the file, discovering that the agency thinks that she has narcissistic delusions and borderline sociopathic tendencies and requires constant praise.

Although Cassie admits that some of it just might be accurate, she starts to consider the possibility that the CIA might be behind the entire thing. She calls Shane for help but is reminded that they have work training. Things just go spiraling out of control for Cassie from then onwards. Just when she is about to leave for training, Marco shows up at her doorstep, and Cassie blurts out that she cheated on him. She has a horrible time at the training. Cassie tries to tell Shane what is happening to her, but the Black Market Carol is part of their team, and she is fuming over the fact that Cassie blackmailed her.

Cassie eventually buys two bottles of vodka and breaks her sobriety for good. She returns home to find Marco has left his key and a note for her, informing her that he will come later to pick his things up. This grieving, inconsolable, and real version of her unsettles even the cheerfully drunk Cassie in the Mind Palace. Cassie tries to reach out to Dot (Cheryl Hines), Ben’s boss at the CIA, but all her messages end up in voicemail. Cassie then calls Shane and seems to cause strife in his relationship by telling his boyfriend about his extracurricular activities.

She later drives herself to the beach, from where she calls her sponsor, Brenda. Meanwhile, Max and Annie retrieve the view master and several other things that Gabrielle and Esteban Diaz took from them. Elsewhere, with the help of her friend Cherry and the paste of jack-o-lantern mushrooms, Megan (Rosie Perez) retrieves the lockbox in which she has kept all the evidence she has accumulated against the North Koreans.

The Flight Attendant Season 2 Episode 5 Ending: Who Is the Woman Pretending to Be Cassie? Is the CIA Framing Cassie?

The main theory that emerges in episode 5 is that the CIA is behind everything that is happening to Cassie. If that’s true, Cassie has every right to be terrified and erratic. Someone within the CIA likely fabricated her psych evaluation file. Shane thinks that it is Benjamin, but Cassie vehemently refutes this. It can also be Dot, who seems to have the same open and inviting personality that Buckley Ware had in the first season before it was revealed that he was a psychotic murderer. Moreover, like Cassie, she is blonde and seems to have the same physical build as the mystery woman. As a CIA operative, she presumably has the training to convincingly be other people and commit murders if necessary. As for her motive, it all comes back to Lionfish and its search for Miranda.

In the previous episodes, other versions of Cassie mention March 21 and 23 in passing while she is in the Mind Palace. In episode 5, it is finally revealed why these dates are important. Cassie hadn’t been sober for over a year. She had a lapse on March 21 and then again on March 23. That was about six months into her sobriety in New York. On March 23, she sat in an overflowing bathtub with vodka bottles in each hand. Her neighbor from the apartment below can be heard complaining about the water leaking to his floor. This explains why Cassie saw the leakage in the Mind Palace in episode 4.

After this incident, she decided to move to Los Angeles for a fresh start. When she started attending the AA meetings in the new city, she wanted her time being sober in New York to count for something. So, she lied. Brenda helps Cassie navigate her emotions, but after hearing that the other woman drove under the influence, she reminds her of what happened to her father.