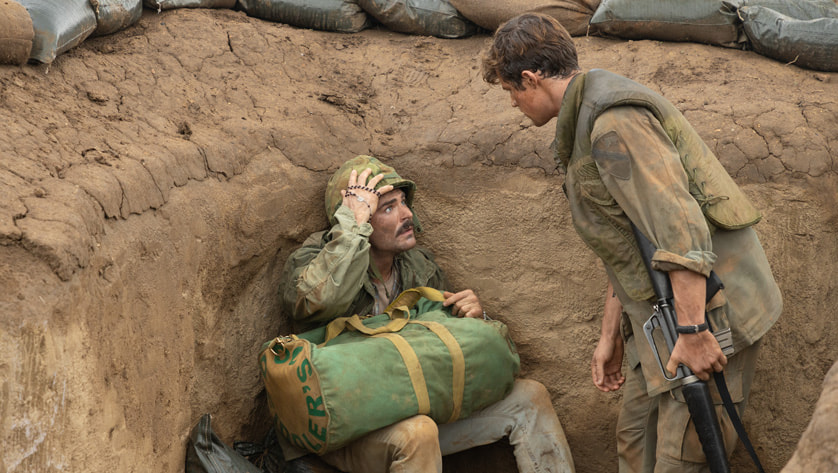 At first glance, the plot of the Apple TV+ film ‘The Greatest Beer Run Ever’ sounds absurd and unreal. And then, when you see the “based on a true story” claim on the screen, it automatically piques your interest. Perhaps that is the greatest selling point of this film — the dichotomy between the surreal absurdity of its narrative and the fact that real-life events inspired it. Set in 1967, this incredible true story revolves around John “Chickie” Donohue (Zac Efron), a young, directionless New Yorker who decides to travel to war-torn Vietnam to deliver beer to his friends from the neighborhood. Along the way, he learns a thing or two about the world at large. Here is everything you need to know about the ending of ‘The Greatest Beer Run Ever.’ SPOILERS AHEAD.

The film begins in Inwood, a neighborhood in Northern Manhattan, in 1967. Chickie is a US Marine veteran, though he never saw combat. Now, he works in the merchant navy. The job allows him to stay at his home for a prolonged period, much to the displeasure of his father, who wants Chickie to move out. But his mother insists that during the short time Chickie stays on the land, he should do so at his home.

The 1960s was a fascinating time in American history. Civil rights activism was in full swing; Kennedy  was assassinated, and there was no end in sight for the Vietnam War. Initially, Chickie and his friends have little idea about what is going on in the Southeast Asian country. They sprout the talking points they hear from the government, believing them to be true and without considering the possibility that they can be biased.

Neither Chickie nor any of his friends who are still in New York have any idea of what war truly is. He drinks, shouts at peace protestors, and gets angry at reporters for how they are covering the war. One day, while speaking to these friends, Chickie declares that he will take beer from New York and deliver them to their enlisted neighbors. Initially, even Chickie thinks that he will not have to go. But the news of his unusual stunt draws the attention of family members of those boys who are already in Vietnam, and they approach him with requests to deliver various things to their loved ones.

Once in Vietnam, Chickie’s belief about the war drastically changes. He witnesses the unnecessary savagery with his own two eyes. And yet, a part of Chickie refuses to give up. That part of him is also the source of his limitless optimism. In his journey, he sees the worst of humanity but still manages to keep his own intact. He suffers, and through suffering, he grows up.

The Greatest Beer Run Ever Ending: Does Chickie Deliver Beer to All His Friends?

‘The Greatest Beer Run Ever’ isn’t necessarily an anti-American film as it is an anti-war film. Given that during the Vietnam War America was the aggressor, the picture the film portrays isn’t particularly kind to the country. The film is heavily critical of America’s actions in Vietnam, but simultaneously, it attempts to exonerate the soldiers that fought for America in that war — some of whom were Chickie’s friends. ‘The Greatest Beer Run Ever’ paints them as heroes — unfortunate victims of ruthless American capitalism, just like the Vietnamese themselves.

This seems like a great disservice to history itself. If we are to be critical of America’s actions in Vietnam, we have to be critical of the roles that the country’s soldiers played in executing them. It is easy to put the blame on a shadowy government organization like the CIA, it’s much harder to hold the boy from down the road accountable.

Ultimately, as a film, ‘The Greatest Beer Run’ fails to rise above its potential, but that doesn’t mean it’s not a good film. It depicts an earnest man’s efforts to do something good in his life. In the process, he learns not to trust the system. He successfully delivers beer to several of his friends from the neighborhood, who are posted across Vietnam at this time. All of them — Rick Duggan, Kevin McLoone, Tommy Collins, and Bobby Pappas — initially express shock and exasperation when they see Chickie and find out why he is in Vietnam. However, almost always, Chickie succeeds in positively impacting the lives of his friends.

The entire experience changes Chickie as well, altering him in ways that when he finally goes back to the US; his friends and loved ones hardly recognize him. Chickie also makes friends among the Vietnamese, the most prominent of them is the traffic police officer he refers to as Oklahoma. Their relationship flourishes in the film until Oklahoma is killed during a Vietcong attack on Saigon. During his stay in the country, Chickie also becomes friends with Arthur Coates (Russell Crowe), an American war correspondent, who offers the younger man much-needed context to the things happening around him.

Why Does Chickie Blame Himself for Minogue’s Death?

While Chickie delivers beer to several of his friends, others, he is told, have been killed in action. No other death fills him with more guilt than that of Tommy Minogue, who was one of his best friends. Minogue was unsure about enlisting and going to Vietnam, but Chickie convinced him to do it. After discovering the realities of the War in Vietnam, Chickie is forced to recognize that he persuaded his friend to go and die in a needless, senseless war. When he returns to New York, Chickie musters enough courage to face Minogue’s mother and tell her the truth.

In this film, Bill Murray steps away from his comfort zone and plays a World War II veteran, the Colonel. He projects the moral necessities of World War II on Vietnam and actively encourages Chickie when he decides to go to the Southeast Asian country. After his return, Chickie speaks to the Colonel and urges the older man to recognize the fundamental difference between fighting Nazism and warring against desperate people defending their homes.

Like many other films based on true stories, The Greatest Beer Run Ever offers additional information on the real-life people behind the characters. Rick Duggan, Kevin McLoone, Tommy Collins, and Bobby Pappas — they all made it back to the US alive. Although Chickie never became a police officer like he wanted to or a peanuts seller at the polo grounds for that matter, he went back to school, graduating from high school and later from Harvard University’s Kennedy School of Government.

The title cards also reveal that Chickie was a sandhog, working as a New York tunnel builder, eventually rising to the position of the organization’s legislative and political director. The film then shows the real Polaroid photo taken at LZ Jane right beside the one recreated for the film. We then see Chickie with his four friends as they are now. The final title card is about Minogue. It discloses that Minogue died while protecting the lives of his commanding officer and fellow soldiers, adding that there is a grassroots campaign to get Minogue the Medal of Honor.