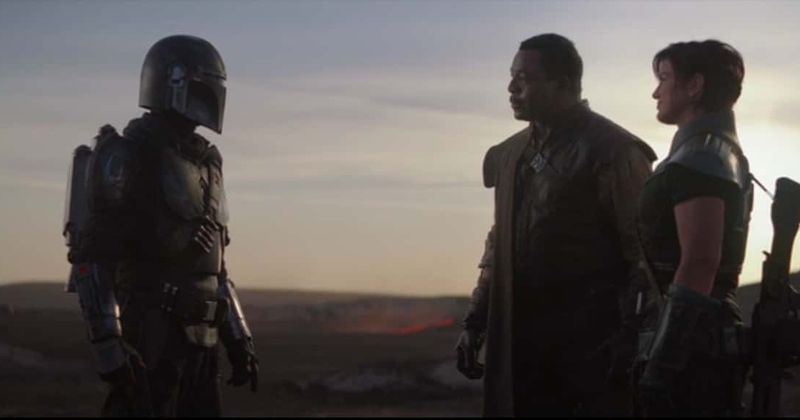 ‘The Mandalorian‘ left us with a cliffhanger in the penultimate episode, where we saw the Disney+ series finally kicking the action up a notch, after meandering in exciting adventures midseason. The good guys and bad guys are clearly divided in teams as Moff Gideon, assisted by his Imperial army, manages to pin down Mando, Greef Carga (the bounty hunter who gave Mando his jobs), and Cara Dune (who assisted Mando earlier).

Things look bad for everyone as Kuill is killed and Baby Yoda is sped away by Stormtroopers. This is where the season finale or Episode 8 picks up.

‘The Mandalorian’ Episode 8 starts off with some Stormtroopers talking amongst themselves while knocking Baby Yoda on the head. Luckily before viewers get too angry at this atrocity, IG-11, the former killer droid who has now been reprogrammed, shows up. The droid is just as ruthless as it was in Episode 1 and takes out a bunch of Stormtroopers while riding one of their Speeder Bikes.

Soon enough, Mando, Greef, and Cara all join into the fray, and they seem to be gaining the upper hand before Gideon shows up. He decides to blow up the power source of the E-Web cannon, taking his deadly weapon out of play, but injuring Mando in the process. Gideon also seems to know all about Mando, Cara, and Greef. He is a formidable opponent, who does not allow respite.

A flamethrowing Stormtrooper is instructed to flush out Mando and his team. However, Baby Yoda steps up, using the Force to protect the group. There is no doubt that danger is closing in, and Mando instructs the others to go on without him. This is where IG-11’s characteristics of a nurse droid come in handy. The droid manages to tend to Mando’s wounds, which leads to two of the biggest developments in the series. Firstly, we get to see Mando without his helmet, and secondly, we see Mando trust a droid. Talk about character growth!

When the group makes its way to the underground armory, where Mando used to go for his Beskar armor, another horror awaits them. They notice the discarded armor from several fellow Mandalorians, meaning that many of them sacrificed their lives after assisting Mando in Episode 3. Upon meeting the Armorer, more backstory about Mando becomes clear.

We learn that his name is Din Djarin, and the Mandalorians are not a race but a creed. This is why protecting the foundlings is so important, because they are instrumental to the survival and continuation of the Mandalorians. We learn that Djarin was rescued by a group of fighters who raised him as their own, and now it seems that he has to do the same for Baby Yoda. His mission is clear, and he urges the armorer to leave with them, but she wants to stay back until the fight is over.

Their immediate exit strategy runs into a hurdle as Stormtroopers are bearing down on them. This is when IG-11 comes to the rescue, and truly, the droid has been phenomenal in the episode. Programmed to protect Baby Yoda at all costs, the droid self destructs, taking out the Stormtroopers. As Greef, Cara and Mando try their escape, Gideon flies in, attacking.

Obviously, the aerial advantage is too much for those on the boat, but Mando has a trick up his sleeve. He uses the jetpack (which we have seen Boba Fett do) and gains the height advantage on Gideon’s ship, before managing to plant an explosive from the outside. The ship is taken out of commission, as Mando saves the day. By the end of the episode, we see Mando going off with Baby Yoda, looking for Jedis, as instructed by the armorer. Greef tries to get Cara to agree to stay on as a hitman, or at least an enforcer.

However, the biggest surprise is reserved for the end of the episode, when we see Gideon emerge with a Darksaber, which is the saber handed to the first Mandalorian inducted into the Jedi order in the ‘Star Wars‘ universe.

Titled ‘Redemption’, the final episode of the first season packs a lot of action. However, with Taika Waititi’s direction and Jon Favreau’s writing, there cannot be any doubt about the humor present. It is wonderfully packed in, so as not to stick out, but provide relief amidst intense sequences. One example would be how IG-11 jokes and puts Mando at ease, allowing the warrior to take off his helmet.

Bigger than the action, however, are the reveals in the episode, which includes backstory about Mando, and who he really is. The episode also does not waste any time setting up the threads of narration that will be picked up in the upcoming season.

Ultimately, Episode 8 gives us a lot of information to process, which could have been better spaced out throughout the season. However, it deals with this information wonderfully, so it does not get too overwhelming. Moreover, it shows character growth, like Mando’s sadness at IG-11’s demise. Altogether, it is a strong conclusion to the first season, and we would expect ‘The Mandalorian’ to only get better in Season 2.