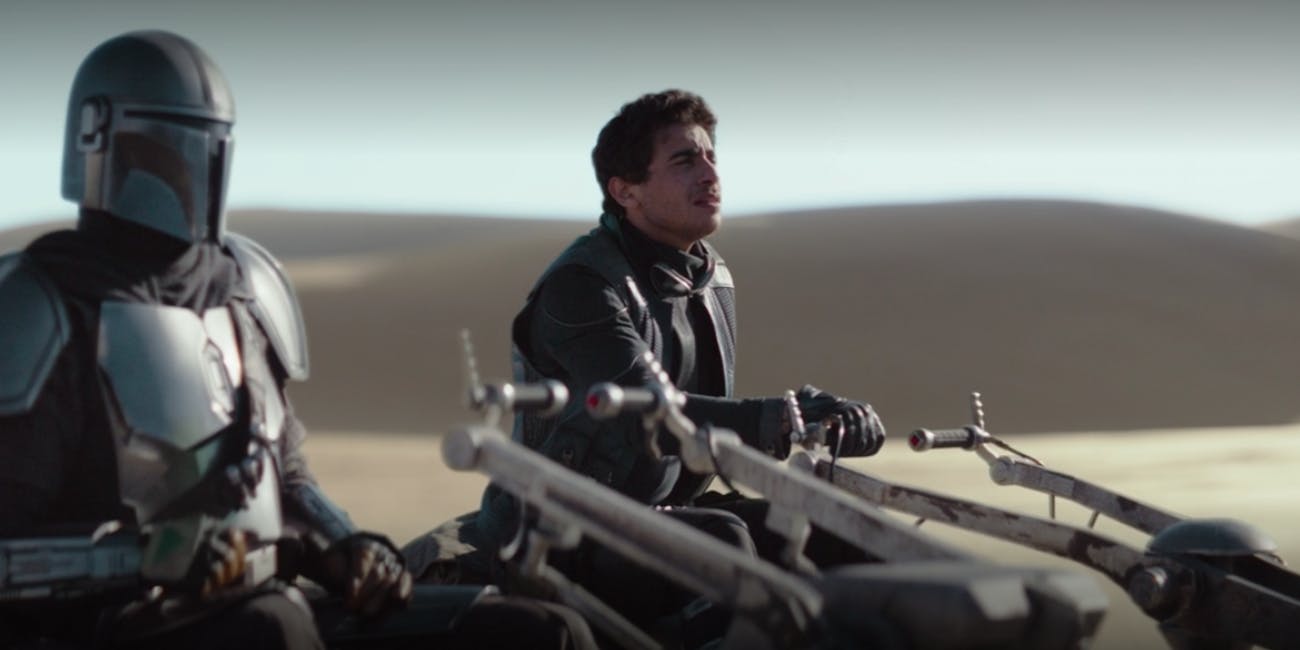 The Mandalorian along with baby Yoda are squarely on the run, as they have been fleeing for the past couple of episodes. With several bounty hunters after them, danger could be around any corner. This is the note that Episode 5 of ‘The Mandalorian‘ begins on as Disney+ prepares us to follow the adorable duo on their adventures.

Titled ‘The Gunslinger’, this time, trouble finds them while they are traveling. For the first time, ‘The Mandalorian’ shows us a dogfight, as a bounty hunter attempts to engage the Mandalorian while he is flying in his ship. Of course, the assailant gets blown to bits. However, the Mandalorian’s ship is damaged in the process and now he must look for a planet to land on. We do see a planet in the distance and ‘Star Wars‘ fans will find a lump in their throat as this place is all too recognizable. Yes, we see Tatooine properly for the first time. It has been the home of a lot of action and is perhaps the most recognizable planet in the ‘Star Wars’ universe.

Mando lands here and notices the Pit Droid. However, his distaste for droids remains constant from the first episode, and he instructs the person (played by Amy Sedaris) to repair his ship without droids. Payment is an issue and Mando decides to look for some wetwork that is right up his alley. This takes him to Mos Eisley Cantina, where Han Solo met Luke Skywalker if you remember your franchise history. This is where Mando meets Toro Calican, played by Bobby Cannavale’s son. The assassin has a job for Mando. He has to bring in Fennec Shand.

However, Mando knows Fennec by reputation, who happens to be a top assassin with a big bounty on her head. Thus, he turns down the offer. This is where Toro reveals that he is green behind his ears and has not brought in a bounty before. He wishes to be a part of the guild with Mando’s help. In a world full of experienced bounty hunters we finally get to see a novice. Mando decides to help the young assassin, showing him the ropes.

You might be wondering where baby Yoda is all this time, but don’t worry. Amy Sedaris’ character steps in as a kindhearted babysitter when Mando leaves baby Yoda on his ship while it is being repaired. Toro and Mando set off to hunt Fennec. However, the hunters soon become the hunted, when Fennec sets an obvious trap for them. The duo seems to be pinned since Fennec is a sharpshooter and has a height advantage.

However, they make use of the cover of the night to advance and take down the lone assassin. A dynamic scene plays out here as the two travel across the desert terrain. Mando and Toro make use of flares as distractions, and there is a fair bit of shooting going on. However, Fennec is subdued finally.

We realize the first inkling of trouble arises when Fennec recognizes Mando, and says that she was on the same planet where The Client was. It appears that Mando and baby Yoda have become infamous all over the galaxy. Fennec wants to team up with Toro to take down the Mandalorian. However, the latter apparently kills her. He plans to take baby Yoda for himself and make his entry into the guild as a legend. Obviously, Mando puts an abrupt stop to his plan by killing him. However, by the time the episode ends, we see that someone has come to Fennec’s rescue, although the identity is hidden. Mando leaves once again, realizing that danger keeps inching closer to the two.

‘The Mandalorian’ Episode 5 is a treat for any ‘Star Wars’ fan. There are a lot of references to familiar places, to take you on a nostalgic ride. However, if you walked in expecting something fresh, you might be left slightly disappointed. In the hands of Dave Filoni, the episode is highly referential. That being said, it does not offer much by the way of plot progression.

Sure, the story is meaty, but the turns are very predictable by now. While the previous episode showed a similar adventure, it made the wise decision to set it in an unknown planet, taking the chance to educate us about its people and culture. Setting Episode 5 in a highly familiar place does little more than fan service. We walk away with no new information. Being at the midpoint of the season, it is time that ‘The Mandalorian’ must pick up the pace and throw out the big guns that will propel the show forward. There should be some big reveals coming in the next episode, in order to hook the viewers to the last stretch of the first season.