The Munsters Ending, Explained: Do Lily and Herman End Up Together?

Written and directed by Rob Zombie, the American rocker and filmmaker of movies such as ‘House of 1000 Corpses’ and the 2005 ‘Halloween’ remake, ‘The Munsters (2022) is a Netflix horror comedy. It serves as a prequel to the well-loved CBS sitcom of the same name, which originally aired from September 1964 to May 1966. The film revolves around the origin story of the Munster family, depicting how Herman (Jeff Daniel Phillips) and Lily (Sheri Moon Zombie) fell in love and traveled to America when things turned dire for them in their native Transylvania. Here is everything you need to know about the ending of ‘The Munsters.’ SPOILERS AHEAD.

The film begins in Transylvania. The self-proclaimed most intelligent man in the world, megalomaniac scientist Dr. Henry Augustus Wolfgang (Richard Brake), goes from one cemetery to the next, robbing graves and gathering parts of the deceased so he can create the perfect human being. Accompanying him is his not-so-trusted and incompetent assistant Floop (Jorge Garcia). They eventually go to a morgue, where the bodies of the recently-deceased von Rathaone siblings are kept.

Shelly von Rathaone was a world-renown astrophysicist, the actual most intelligent man in the world, whereas his brother Shecky was a failed comedian who was eaten alive by a heckler. Henry sends Floop to pick up Shelly’s body for his experiment, but the other man, of course, gets Shecky instead. And the predictable results follow. After much electrical discharge and maniacal laughter, the doctor’s creation comes alive. But instead of uplifting humanity with science and innovation, he begins sprouting bad jokes.

Meanwhile, Lily, the daughter of the Count of Transylvania, has a terrible date and returns to her home, believing that she will never find the man of her dreams. She sees the newly-reborn Shecky on television during Henry’s ill-fated demonstration, and it’s love at first sight. 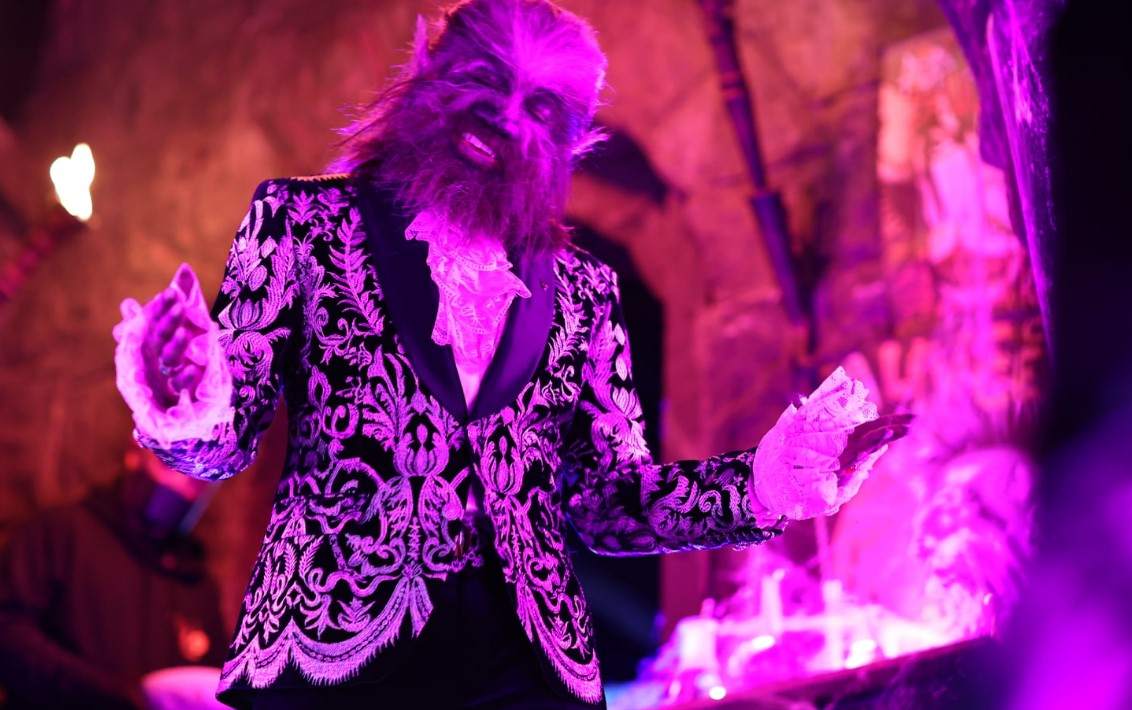 Shecky doesn’t remember his actual name, and Floop tells him it is Herman Munster. On Floop’s insistence, Herman becomes a rocker. Although his music doesn’t become popular, it serves as a catalyst in his first encounter with Lily. It’s love at first sight for Herman as well.

Elsewhere, Lester (Tomas Boykin), Lilly’s brother and the Count’s (Daniel Roebuck) son, is up to no good. He has accumulated a massive debt to Zoya Krupp, a shrewd loan shark later revealed to be the Count’s former wife. The Count broke her heart, and she has since been looking for a way to get revenge. She wants the Count’s castle if Lester can’t repay her, and the latter has no choice but to agree. He knows that he can’t ask his father or sister to give up the castle; they are well aware of the troubles he gets into. However, as the relationship between Herman and Lily starts to get serious, Lester sees an opportunity to get what he wants through the prospective addition to the family.

The Count isn’t fond of Herman. He has realized that the younger monster isn’t particularly bright and believes that Herman doesn’t deserve his daughter. But as Lily is completely smitten with Herman, there is not much he can do. He keeps telling Lily that she deserves better, but the relatively young vampire knows what she wants and resolutely sticks to it.

The Munster Ending: Do Lily and Herman End Up Together?

The fans of the original series are spoiled with the film’s ending, but that shouldn’t stop us from enjoying the film. We know that Lily and Herman will end up together, but one of the reasons that we watch this film is to learn more about their relationship. We have seen the love that Lily and Herman have for each other in the show; the film depicts the beginning of it. For a viewer, what takes precedence with this film is the journey these two characters embark on, not their ultimate destination. Plus, Zombie’s unconventional approach to macabre is always a feast for the senses, even if it is heavily laced with humor as it is in ‘The Munsters.’ 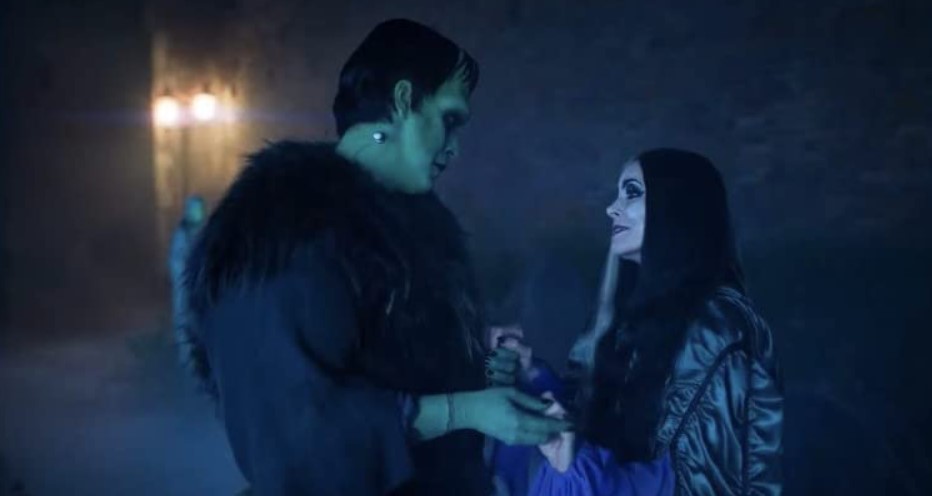 Lily and Herman have a whirlwind romance. They visit a karaoke bar, get each other’s faces tattooed on their skin, and go to a picnic on a hazardous site. Herman eventually proposes, and Lily accepts, much to the dismay of the Count. Lily and Herman get married in a picture-perfect morbid wedding officiated by the Tin Can Man. The Count considers another attempt to convince his daughter not to go through with the wedding but realizes that she will not change her mind. Henry and Floop are also present at the wedding. While the latter can’t be happier, the former drowns the sorrows of his failure in alcohol.

After marriage, it’s time for the honeymoon, and Lily and Herman pick the perfect destination for any lovebirds — Paris. What they don’t realize — as this is the first time they have stepped out of Transylvania — is that the Parisians are terrified of them. They believe that the people are simply being rude to them. Having learned of a monster lurking in the sewers of Paris, Lily and Herman venture underneath the city to see the creature. And this is how they meet Spot, the dragon that becomes the Munster family’s pet.

Why Do Lily, Herman, and the Count Move to America?

While everything seems to be going well for the newly-married Munsters, the Count arrives in Paris with bleak news of the loss of the castle and understandably blames Herman for it. Right before the wedding, Lester approached Herman and convinced him to sign a blank page, which transferred the castle to Zoya. Although Herman becomes agitated, he accepts responsibility and decides to do something about it. He comes to think that he can be successful in Hollywood and convinces his wife and father-in-law to immigrate to the US with him, and Spot and the Count’s servant Igor come along with them.

They find their ideal home at 1313 Mockingbird Lane in the fictional city of Mockingbird Heights. The dilapidated mansion looks dreadful, spooky, and perfect. As the day they move in happens to be Halloween, people in their neighborhood think that the Munsters are in their costumes, while the Munsters see the costumes of their neighbors and think that’s how they actually look. Herman even lands a job at a funeral home. 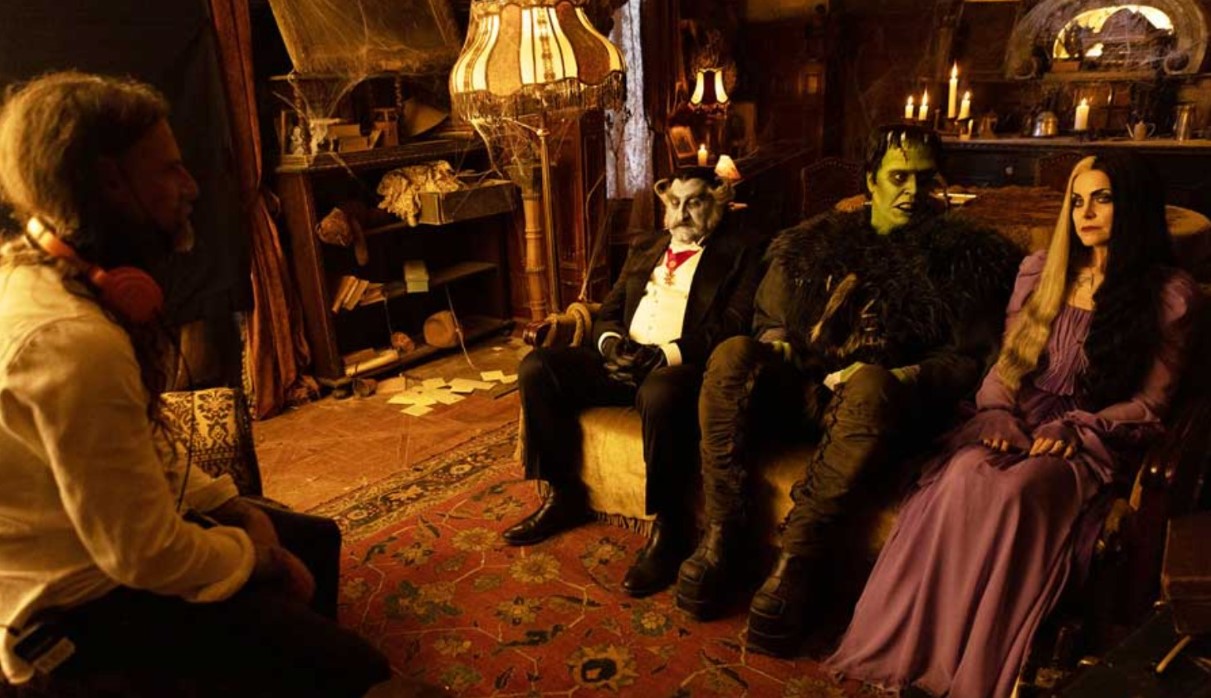 However, when Herman leaves for work the following morning, he discovers that he is surrounded by people he believes look horrible. In fact, this is the first time he is seeing his neighbors without their Halloween costumes. Terrified, Herman rushes back inside and reports to his wife and the Count what he saw. They also become unsettled when they come out and see their neighbors.

When there is a knock on the door, they feel a sense of dread, believing that it’s one of their neighbors. However, it turns out to be Lester. He took the money he got from Zoya, went to Las Vegas, and won big. Now, he has returned to his family to compensate for his misdeeds. The film ends there, with Herman celebrating the fact that he is wealthy now.

Read More: Where Was Netflix’s The Munsters Filmed?