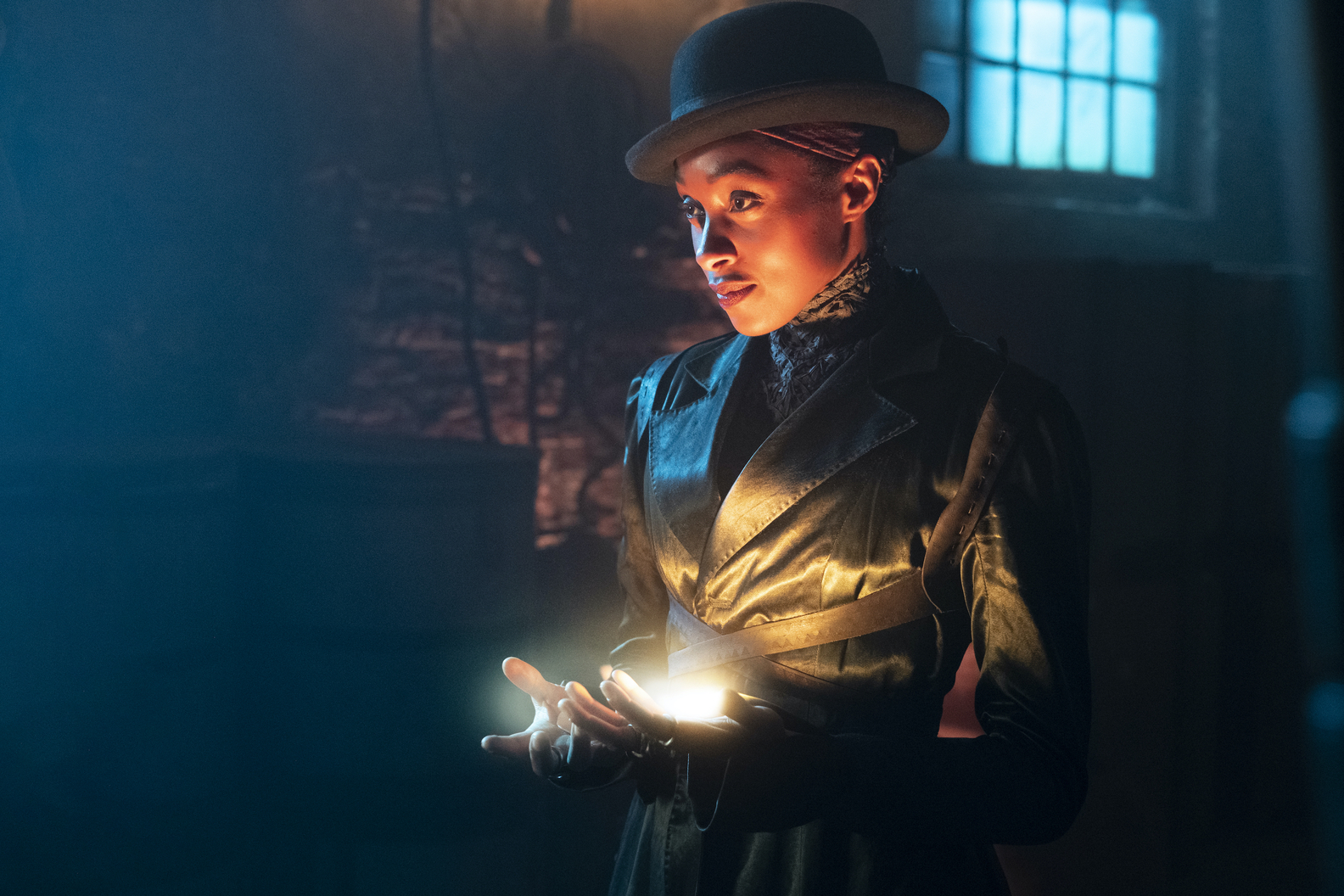 HBO’s ‘The Nevers’ is a steampunk science fiction series that revolves around a group of people, mostly women, in Victorian London, who gain extraordinary abilities or “turns” when a mysterious ship appears in the sky. Three years later, these people, or the Touched, face prejudice and suspicion from all corners of society, including the government. Seemingly to protect them, Amalia True (Laura Donnelly), a Touched herself, opens an orphanage with the financial backing of philanthropist Lavinia Bidlow (Olivia Williams).

In episode 3, titled ‘Ignition,’ Amalia tries to recruit Bonfire Annie (Rochelle Neil). Mundi (Ben Chaplin) has yet another secret meeting with Hugo Swann (James Norton), and it is revealed that they share a complicated past. Amalia and others at the orphanage learn about the numerous victims of Dr. Hague’s (Denis O’Hare) shadowy organization, and Mary (Eleanor Tomlinson) sings.

Episode 3 begins as Annie attacks Declan “the Beggar King” Orrun’s (Nick Frost) opium shipment to establish her territory, forcing the ruthless crime lord’s men to retreat. Amalia and Penance (Ann Skelly) show up, reminding Annie that she helped them with Maladie (Amy Manson), and asks her to join them, but Annie declines. Later, Orrun learns of their presence at the site from one of his lackeys and sends Mr. Odium (Martyn Ford) after Amalia.

Mr. Odium, whose turn seems to involve water, nearly kills Amalia, but she survives and kills him instead. Swann convinces a reluctant Augie (Tom Riley) to keep being the owner of the Ferryman on paper. He later meets up with Mundi, and it is revealed that Swann arranged the raid at the orphanage so that Mundi can bring some of the Touched there to his club. Swann brings up their shared past, much to Mundi’s chagrin.

Penance and Myrtle (Viola Prettejohn) discover the leaflets left around the city advertising the orphanage as a safe place for the Touched. But the address on it leads to somewhere else. When they bring this to Amalia, she immediately realizes that the orphanage is being used to lure in unsuspecting Touched. She takes Lucy (Elizabeth Berrington) and visits that property. They discover that it belongs to the same people who tried to kidnap Myrtle. They apprehend the woman there and find a book that lists all of Hague’s victims.

With Desirée’s (Ella Smith) help, the women at the orphanage learn about the horrors Hague has been committing. Mary tells Penance that she is ready to sing her special song again. Penance has created a microphone-like device that can amplify sound. They choose an open park for Mary to sing, as from there, her song will reach even the Touched who are miles away. As Mary begins to sing, and hundreds of the Touched gain comfort by knowing that they are not alone, she is suddenly gunned down by a member of Maladie’s crew.

The Nevers Season 1 Episode 3 Ending: What Convinces Mary to Sing?

Since she has been brought to the orphanage, Mary has been trying to figure out what Amalia’s ultimate motive is. According to her, when she asked around in the orphanage, different girls there had different answers. She subsequently confronts Amalia, likely believing that directly speaking to the enigmatic woman is the best course of action. She does trust Amalia a significant amount. After all, the other woman did save her from an insane serial killer.

But Mary doesn’t know whether she should lead Amalia to the other Touched. These deep-seated doubts and suspicions prevent her from accessing the song. But they evaporate when she discovers what the orphanage is protecting the Touched from. When she learns about the experiments that Hague’s organization performs on the Touched, she realizes that the orphanage is the best chance that the Touched have.

As she finds resolve and a complete willingness to help Amalia, the song returns to her. Even though she is killed, her song ensures the safety of numerous other Touched. As the episode ends and the grieving residents of the orphanage return to their sanctuary, they find that Annie and the others are waiting for them. With her sacrifice, Mary leads the confused and distraught Touched to the place they belong.

What Are the Secrets that Frank Mundi Is Hiding?

‘The Nevers’ initially establishes Mundi as a competent detective who may not have the intuitive brilliance of some of the fictional detectives of Victorian literature but can be extremely relentless while working on a case. It is later revealed that he has somehow become embroiled in Swann’s enterprising schemes. He is supposed to supply the entertainers at Swann’s club, and as mentioned above, his raid at the orphanage was organized to secure Touched individuals for the Ferryman.

Episode 3 sheds light on the likely reason why Mary didn’t show up at their wedding. During their conversation, Swann states that Mary did Mundi a favor and clearly implies that they (Mundi and Swann) had sex multiple times. Mundi, who is evidently struggling with that part of himself, claims that he was drunk, making Swann remind him that he was only drunk the first time.

During his interaction with his former bride-to-be, Mary, it is reaffirmed that he is attracted to men. Mary tells him that she will always be there for him and urges him to be true to himself. This is their last interaction before Mary’s death. Mundi is there at the park while Mary sings. While he can’t hear her, he is observant enough to notice its effect on the other Touched. When she is shot, he chases after the shooter and kills him. But vengeance is of little comfort when he has lost the only person who had accepted him in his entirety.