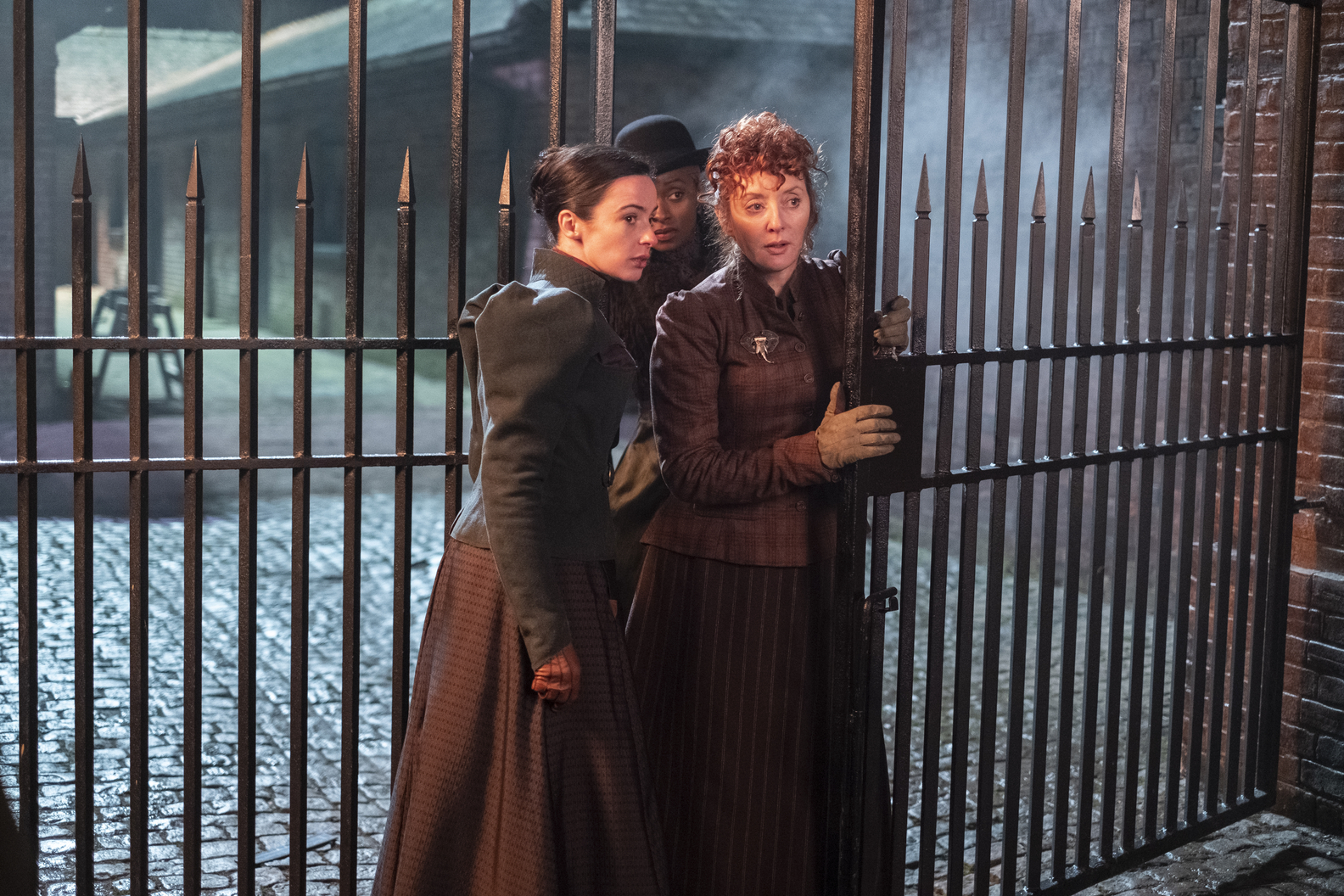 In ‘The Nevers,’ HBO’s steampunk fantasy series predominantly set in Victorian London, a group of people, mostly women, gain abilities or “turns” when a mysterious glowing ship appears in the sky. Three years later, these people have come to be known as “the Touched” and are subjected to prejudice and suspicion from the rest of society, including the British Empire itself.

In episode 4, titled ‘Undertaking,’ a sinister plot begins to reveal itself as Amalia True (Laura Donnelly) and the others at the orphanage start to realize that someone who is much more calculating and ruthless than Declan “the Beggar King” Orrun (Nick Frost) and more dangerous than Maladie (Amy Manson) has planned the attacks.

Amalia has a rippling about a meeting with Lord Massen (Pip Torrens), and that eventually leads to her learning heart-breaking truths about one of her closest friends. Meanwhile, the younger residents of the orphanage figure out the meaning of Mary’s (Eleanor Tomlinson) song. Here is everything you need to know about ‘The Nevers’ episode 4 ending. SPOILERS AHEAD.

The orphanage grieves Mary’s death as her funeral takes place. A couple of Purists get arrested for hurling insults at the deceased. From them, Frank Mundi (Ben Chaplin) gets a card with a swan imprinted on it and later confronts Hugo (James Norton) at a high-end club. Hugo points out that he wouldn’t leave behind evidence that can implicate him if he were behind this. Either way, Mundi severs all their arrangements, claiming that he just doesn’t care any longer.

Meanwhile, Massen defuses a strike over the handling of the ammunition at the dock. Amalia and the others narrow down their list of suspects for the attacks. Bonfire Annie (Rochelle Neil) pays a visit to some of Orrun’s men. She runs into one of his Touched associates, Nimble (Vinnie Heaven), who tells her that there might be a common enemy using both Maladie and Orrun’s men to go after the orphanage. Maladie comes to the police station and takes the Superintendent of Police as a hostage.

When Mundi enters the room, she claims that she didn’t order the attack on Mary. She tries to escape, but Mundi follows and captures her. When one of the police officers tries to slit her throat, Mundi stops him as well, stating that Maladie will get justice from them. Myrtle (Viola Prettejohn), with her ability to understand different languages, knows the meaning of Mary’s song. With the help of her fiancé Aneel, Harriet (Kiran Sonia Sawar) arranges a gathering of translators to decipher what Myrtle is saying.

Penance (Ann Skelly) meets Augie (Tom Riley), who is also on the list of suspects along with his sister Lavinia (Olivia Williams). Things clear up between them, and they reconnect. After seeing the rippling, Amalia meets Massen. Acting out a hypothetical scenario, Massen becomes the mastermind behind the attacks, and Amalia becomes Mary. The cryptic conversation that follows convinces Amalia that he is indeed the man behind the attacks. She later takes Lucy (Elizabeth Berrington) and Annie to burn down the warehouse where Massen keeps his ammunition.

The Nevers Season 1 Episode 4 Ending: What Does Mary’s Song Mean?

Initially, everyone, including Mary, believes that her song is for assuring all the Touched that they are not alone in the world. The song can only be heard by the Touched, and that effectively creates a sense of connection between them. However, from the moment Myrtle hears it the first time, she realizes that it is mostly meant for only one person, Amalia. But she can’t reveal it to the others at the orphanage because she can’t yet control her turn. Harriet helps her decipher her own words with a roomful of translators and then takes what they have learned to Amalia and Penance.

Throughout the episode, Amalia shows an uncharacteristically vulnerable side of herself. She is clearly grieving but drowns it out in her pursuit of the shadowy figure who organized the attacks. She keeps saying that she was left behind, never really explaining by whom. The fact that the other characters don’t ask her this question likely means they probably know the answer. She indicates that she is from a society that is socially much more egalitarian than Victorian England.

Mary’s song implores Amalia not to despair, telling her she is not alone. The song is most likely placed inside Mary’s mind by whatever entity was driving that glowing ship on that day three years earlier. Or maybe the ship itself is the entity. It even describes its current situation. It likely crashed after its appearance and was damaged. As the entity states, it needs to heal. It is now “inside the city,” surrounded by “darkness.” Lavinia and Hague (Denis O’Hare), two people who are conducting horrible experiments on the Touched, currently possess it. Perhaps this is what the entity means by “darkness” and not literal darkness. The song then addresses all the Touched, imploring them to come together.

Who Has Betrayed Amalia and the Orphanage? Why?

Lucy has betrayed Amalia and the orphanage by being a spy for Massen. When Amalia finally gets confirmation about it during their raid on Massen’s warehouse, she initially doesn’t know how to deal with it. Lucy was the first woman who walked through the orphanage’s door, and since then, Amalia has come to see her as someone she can lean on and doesn’t need to support.

But Amalia has failed to see the immense hatred that Lucy feels for her turn because it killed her son. Since then, she has regarded the turns as curses and the Touched like herself as abominations. When Massen promised her that he would help her get rid of it, she ardently believed it and decided to betray the friendships and connections she had formed at the orphanage.