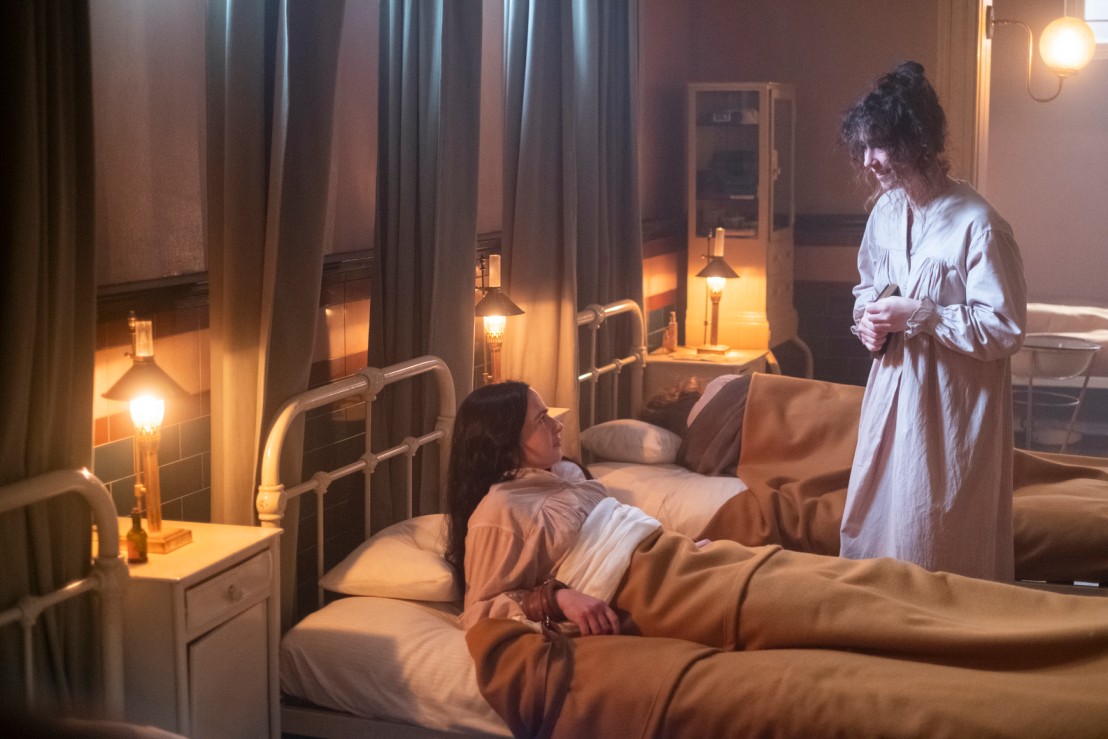 HBO’s ‘The Nevers’ is a story of hope and the indomitable desire to create a better future. The period science fiction adventure series predominantly takes place in Victorian London, where people belonging to various disenfranchised groups suddenly gain abilities or “turns” after a mysterious glowing object appears in the sky. Three years later, these people, most of whom are women, have come to be known as “the Touched.” The British Empire and the society at large regard them with suspicion and think that the Toucheds true purpose is the destruction of the world as they know it.

In the mid-season finale, titled ‘True,’ Amalia’s (Laura Donnelly) backstory is revealed, giving context to what is happening to her and her friends. We learn that Maladie (Amy Manson) has real reasons to hate Amalia and why Amalia feels that she and the other Touched have a grand purpose. This is what you need to know about ‘The Nevers’ season 1 episode 6 ending. SPOILERS AHEAD.

Episode 6 is divided into three chapters. The first chapter is ‘Stripe.’ Set in an unspecified year in the future, it shows a world ravaged by a war between two factions: the Planetary Defense Coalition (PDC) and FreeLife Army. Both sides have used nuclear weapons, turning the entire world into a poisonous wasteland where breathing without artificial assistance is impossible, and living plants are rare sights.

The PDC military seems to be divided into units known as Pride, with each Pride comprising of different military ranks, such as Crescent, Byners, Knitters, Boots, and Stripes. The PDC soldiers seem to follow a religious doctrine that makes their real names sacred, so they don’t reveal them to just anyone. Instead, they use their ranks during communications.

These ranks seem to correspond to their specific duties in the unit. For instance, Crescents are the leaders, Knitters are the medics, and Byners are the tech people.  As for the Stripes, they seem to be the soldiers who have been in the military for a while, as opposed to the Boots, who are likely the rookies. A Pride with call sign 16th Hailstormers, D-Field Green, runs into a Stripe (Claudia Black) from a unit from Edinburgh while trying to get inside a former PDC science base.

They push through heavy enemy fire and manage to capture their leader, Major Joseph Willing Greenbone. However, once they are inside the base, they discover that the scientists have been killed and the Galanthi collaborating with them has been tortured. Greenbone convinces one of the Boots to change his loyalty and release him. In the ensuing gunfire, several members of the Hailstormers are killed, including the Knitter with whom the Stripe from Edinburgh developed a close connection. At the moment of Stripe’s own death, she is engulfed by two energy tentacles of the Galanthi.

Chapter 2, ‘Molly,’ the story shifts back to Victorian England. Molly is an ordinary baker’s assistant. Her life takes an unexpected turn when she is fired from the bakery to make room for the baker’s daughter and is forced to marry a much older butcher and not the man she is actually interested in. The marriage turns out to be unhappy.

Molly suffers several miscarriages, and then one day, the butcher dies, leaving his bedridden mother in Molly’s care. On the day the Galanthi appears in the sky, Molly jumps into the Thames. Chapter 3, ‘True,’ finds Amalia in a psychiatric hospital, where she meets Maladie or Sarah and Dr. Cousens (Zackary Momoh). She eventually gets out of the facility with Lavinia’s (Olivia Williams) help and sets up the St. Romaulda’s Orphanage along with Penance (Ann Skelly).

The Nevers Episode 6 Ending: Do Stripe and Molly Commit Suicide? What is Amalia’s True Identity?

Yes, both Stripe and Molly commit suicide. In the dystopic future, Stripe tells Knitter that the last Galanthi on Earth is leaving the planet through the portal it created with the scientists’ help, effectively taking the last vestiges of hope that the younger woman still has. When Knitter is killed, Stripe desperately tries to give her back at least some of the hope that she took, but it is too late. Later, while alone, Stripe drinks from two containers with hazard symbols on them. These are likely poisonous compounds. At the time of her death, the Galanthi wraps her with its energy tentacles and takes her to Victorian England.

Meanwhile, Molly drowns in the Thames. So, the Galanthi installs Stripe’s consciousness in Molly’s body, making her the primary vessel of the change it wants to bring to Earth and humanity. The softly spoken and demure Molly subsequently becomes the assertive and resourceful Amalia True. She tells the truth about herself to both Cousens and Penance. As the episode ends, she reveals her real name to Penance — Zephyr Alexis Navine. She also declares that it’s time to share the truth with all their associates.

Who/What Are the Galanthi? What Do They Want?

The Galanthi is a race of interstellar (likely interdimensional) aliens that came to Earth to help humanity deal with the cataclysmic issues it was facing. Even before the war between the PDC and the FreeLife Army began, Earth had become a desolate planet due to human activities. The Galanthi provided the humans a way to escape their own extinction. Initially, this effort was more direct. As Stripe mentions to Knitter, the Galanthi had previously worked on creating pure water systems and stabilizing the tectonic plates.

They even gave certain people abilities that made them more emphatical to others. These people have become known as Spores, likely named after the small orbs of energy that entered their bodies (just like they do for the Touched). It is revealed that Knitter is a Spore. But some people regarded the Galanthi as abominations and their work for humanity as a direct violation of God’s will. These people formed the FreeLife Army. Like any other fanatic organization, they believe their actions are justified.

20 Galanthi originally came through the portal, and the FreeLife Army has killed most of them. Inside the base that the Hailstormers find, the scientists were working on a solution to negate all this with the help of a Galanthi. They built the portal not for taking the Galanthi back to its homeworld or even to bring reinforcements. It is for sending the scientists back to Victorian England so that they can help humanity mend its ways at the start of the industrial revolution.

However, the base was found by the FreeLife Army. They killed the scientists but realized that they didn’t have the means to do the same to the Galanthi. So, they began torturing it by hanging the bloody bodies of the scientists over it. It had formed a bond with these people, and by torturing it this way, they wanted to take away all its hope. This plan ultimately proves to be a failure, as the Galanthi takes Stripe to Victorian London, denoting that it still has hope for humanity.

Why Does Maladie Hate Amalia?

During her stay in the mental facility, Amalia becomes acquainted with Sarah. During this period, Sarah is a non-violent resident of the facility. As the only other person who remembers what happened when the Galanthi appeared in the sky, she becomes Amalia’s confidant. However, when Hague visits and sees right through Amalia’s accent and modestly formed deceptions, Amalia claims that she has been pretending to know about the Touched to help Sarah, turning Hague’s attention to the other woman.

From what he generally does to the Touched, we can glean that he has tortured Sarah and played a pivotal role in her transformation into Maladie. And if Hague tortured Maladie, then Amalia is almost as responsible as him for Maladie’s current condition. It’s no wonder that Maladie despises her fervently and always goes after the people she thinks are Amalia’s friends.

After she gains entry to the underground chamber where the Galanthi is, Amalia gets a rippling, this one being much longer than usual, and it includes visions of her past and future. During it, she hears Hague’s voice telling her if she thought she was the only one who hitched a ride. This indicates that other(s) might have come through the portal along with Amalia and the Galanthi.

Considering his knowledge about the Touched, Hague is likely one of them. The only person who shares his psychotic and fanatical nature among the people of the future is Greenbone. After the gunfight, Greenbone is seriously wounded but not dead. When he sees the Galanthi is taking Amalia to the past, he probably latches himself on to them for the ride. This explains the abysmal lack of concern that Hague has for the Touched. Beyond personal gain, he is driven by the objectives of the FreeLife Army.