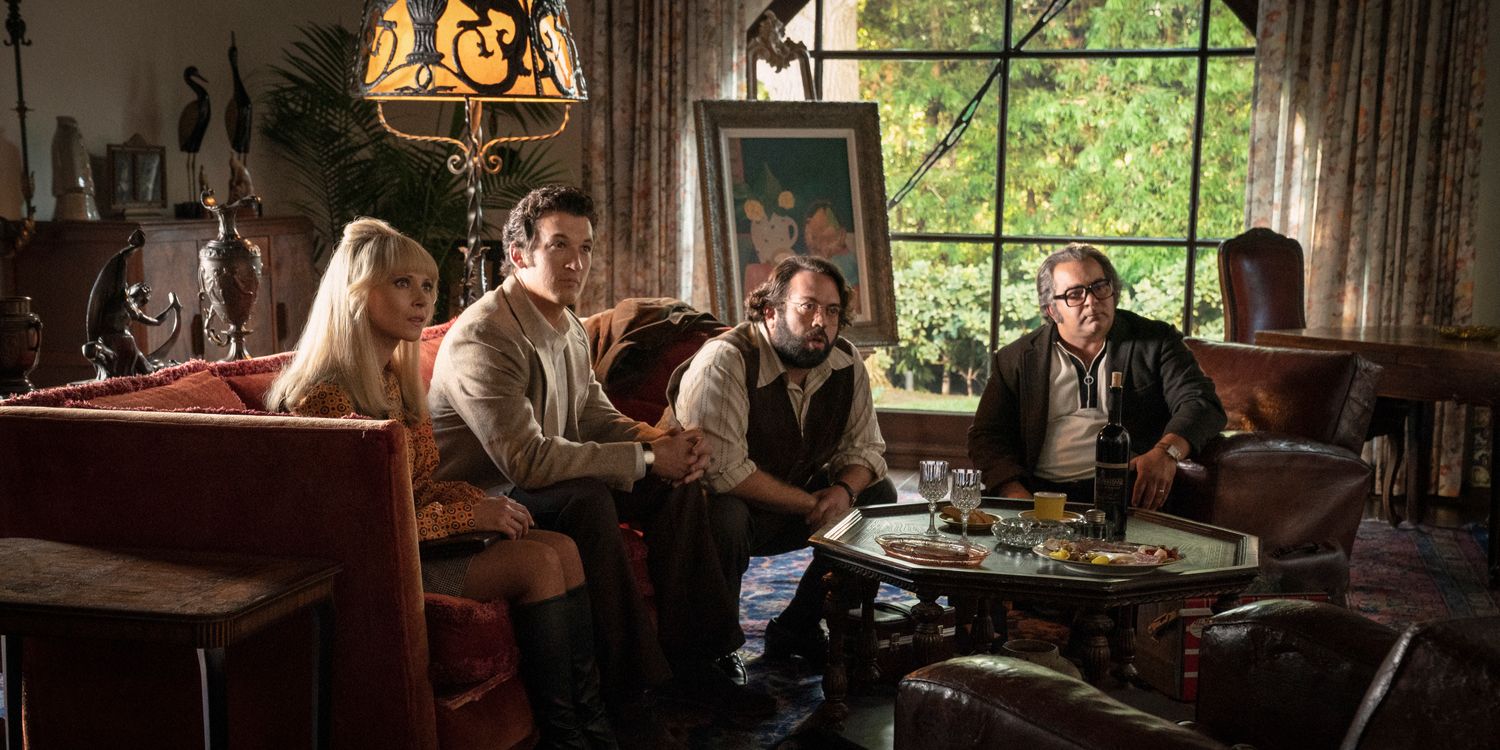 ‘The Offer’ unfolds the drama behind the making of ‘The Godfather,’ the seminal 1972 gangster film that changed the course of cinema. However, producer Albert S. Ruddy faced several challenges and made some bold decisions in making the film. The fourth episode of the series titled, ‘The Right Shade of Yellow’ sees Ruddy (Miles Teller) struggling to cast the right actors for the movie while butting heads with studio head Robert Evans (Matthew Goode). Naturally, viewers must be curious to learn how Ruddy assembled the phenomenal cast of ‘The Godfather,’ comprising Marlon Brando and Al Pacino. In that case, here is everything you need to know about the ending of ‘The Offer’ episode 4! SPOILERS AHEAD!

Episode 4 opens with Ruddy arguing with Francoise. The couple’s fight causes strain for the young producer. Meanwhile, Robert Evans is reveling in the success of his latest production, ‘Love Story,’ which emerges as a critical and commercial success. At a party, Ruddy reveals to Evans that Marlon Brando has agreed to star in ‘The Godfather.’ However, Evans dismisses the idea citing Brando’s recent streak of flop films and his difficult persona.

Francis Ford Coppola and Mario Puzo accompany Ruddy to a meeting with Marlon Brando. During the meeting, the actor reveals that he only agreed to play the part of Vito Corleone since Frank Sinatra hates ‘The Godfather,’ and the duo has a personal feud. Nonetheless, Brando impresses Coppola, Puzo, and Ruddy with a brief performance as Vito Corleone. Impressed by Brando’s commitment to the role, Coppola insists that Brando and Al Pacino should play the film’s two leads.

However, Evans is against the idea of casting Brando and Pacino. Meanwhile, Ruddy’s relationship with Francoise deteriorates, and they seek couple’s therapy. During a session, Ruddy exclaims that he does not want to work with Francoise as a producer but still loves her. Francoise is heartbroken and decides to leave Ruddy. Ruddy goes behind Evans’ back and speaks with Charles Bluhdorn to approve Brando’s casting. After Bluhdorn approves the decision, Evans is forced to meet with Brando.

As production begins to go on the floor, Ruddy meets with Joe Colombo to discuss a solution for Frank Sinatra’s opposition to the movie. Ruddy offers to reduce the story’s focus on Johnny Fontane, a character Sinatra assumes is based on him. After Colombo overhears that the owner of the house Coppola wants to shoot the movie at has backed out of the deal, he threatens the owner to honor his commitment. In the end, Ruddy must convince Evans to cast Pacino in the movie to get the production off the ground.

Even before finishing the script for the movie, Francis Ford Coppola insists that a relatively unknown Al Pacino is the right choice to play the part of Michael Corleone. However, studio head Robert Evans is against the idea of casting Al Pacino in the film. He refuses to see Pacino’s auction tapes and vehemently refuses to listen to Ruddy’s arguments. Instead, he suggests Ruddy a host of other actors to cast in the role. On the other hand, Coppola believes that Brando and Pacino are essential for his vision. Therefore, Ruddy is forced to work around Evans to cast the two actors.

While Ruddy convinces Evans to cast Brando, the studio head warns the young producer to never go behind his back again. Evans’ refusal to cast Pacino leaves Ruddy with no choice but to involve Charles Bluhdorn in the decision. He seeks Bluhdorn’s approval, resulting in Evans becoming furious at Ruddy. Evans pushes Ruddy to cast James Caan as Sonny Corleone. Ruddy agrees as he does not want to enrage the studio head further. However, in the process, his relationship with Evans suffers irreparable damage.

Moreover, Coppola has second thoughts about his ability to realize his vision for the movie. Thus, Ruddy lands himself in more trouble by pushing to cast Pacino. However, the biggest shocker comes for the producer in the episode’s final moments. Ruddy and casting director Andrea Eastman meet with Al Pacino at a bar to break the news of his casting in ‘The Godfather.’ However, Pacino stunningly turns down the role, citing a contract he has already signed to star in a romantic comedy. Ruddy’s efforts to convince the actor are in vain as Pacino leaves intent on honoring his contract. The episode ends with a dejected Ruddy reflecting on the sacrifices he has made to get the film produced.

Read More: The Offer Episodes 1, 2, and 3 Recap and Ending, Explained