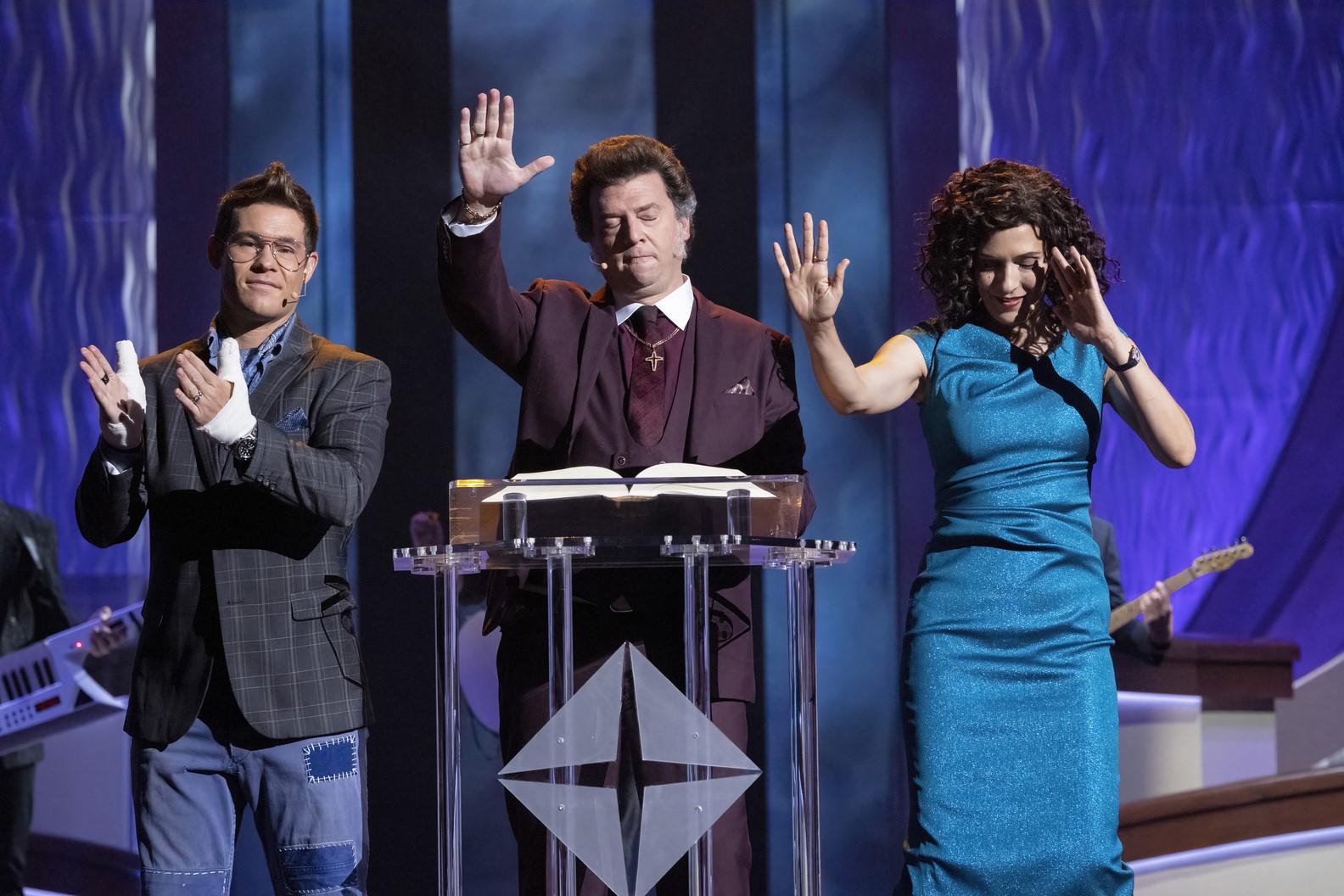 In the seventh episode of season 2 of ‘The Righteous Gemstones,’ titled ‘And Infants Shall Rule Over Them,’ Eli (John Goodman) survives the attack but just barely and is placed on life support. Even with their father lying unconscious on a hospital bed, the Gemstone siblings continue their vicious fight over succession until Martin (Gregory Alan Williams) lashes out at them. Jesse (Danny McBride) and Martin set up a trap for attackers. Judy (Edi Patterson) and BJ (Tim Baltz) help Tiffany find and confront “Baby” Billy (Walton Goggins). Here is everything you need to know about the ending of ‘The Righteous Gemstones’ season 2 episode 7. SPOILERS AHEAD.

The episode begins with Eli in the hospital and Jesse and Judy arriving there with their respective spouses, terrified that they will lose their father. This emotionally charged scene is immediately subverted in a classic Righteous Gemstones style. As soon as they are outside, Jesse starts projectile vomiting out of fear, frustration, and countless other negative emotions. Judy, Amber (Cassidy Freeman), and BJ follow suit.

But this ultimately doesn’t change the fact that they are the Gemstones — ambitious, ruthless, and have no idea of propriety. Jesse and Amber take the stage together during the church’s next sermon, tell the congregation about what has happened to Eli, and shamelessly assert themselves as the next leaders of the church. During the church lunch, Judy calls them out on this. They are soon joined by Kelvin (Adam DeVine), who has been noticeably absent from his father’s bedside.

Since his public spat with his father, which resulted in Eli breaking both his thumbs and losing the leadership of the God Squad, Kelvin has been forced to do much self-reflection. But it’s not enough to change his inherent personality. While he is much more grounded than his siblings, that’s a low bar. As Jesse, Judy, and Kelvin start bickering among themselves, Martin speaks out, criticizing them for their abhorrent behavior.

Gideon sees how his family is acting and announces that he wants to move out, much to his mother’s dismay. Judy, BJ, and Tiffany find “Baby” Billy selling his own version of snake oil. He tries to turn the entire thing on Tiffany, claiming that she never believed in him, but it doesn’t work. Jesse and Martin come up with a plan to lure the attackers in. the oldest Gemstone sibling then meets Judy and Kelvin, and they agree to work together.

The Righteous Gemstones Season 2 Episode 7 Ending: What Happen to the Shooters? Do They Die? Do They Get Arrested?

Jesse and Martin make plans on how to get the attackers while visiting Eli in the hospital. They decide to claim that Eli has regained consciousness and will soon reveal who is behind the attack. They believe that the attack was ordered by Junior, who is most likely part of the Dixie mafia. And after all, Jesse and his friends did threaten Junior with unspeakable things earlier. He later speaks to his siblings, and they agree to lie to their congregation about their father’s condition.

They move Eli back into the family compound, with security personnel and family members watching over him. Jesse goes over the top as always and hires mercenaries to help him confront the attackers at the hospital. They nearly gun down Gideon when he arrives unannounced to help. Jesse forces the mercenaries to leave when he thinks they are mocking him. Meanwhile, Kelvin finally musters enough courage to go see his father. He breaks down seeing how vulnerable Eli seems and starts to pray. And it seems to work like a miracle, and Eli wakes up.

At the hospital, the attackers finally show up. BJ, who has decided to be there that day and is forced to put on a doctor’s coat, informs Jesse, Gideon, and Martin of their arrival. The ruse works perfectly. The four attackers step inside the hospital and start shooting, not realizing that Eli has been replaced on the bed with a dummy. One of them goes down after Jesse and Martin shoot him in the foot and leg. The second one falls from his motorcycle while trying to escape with the others, and Jesse electrocutes him with a cattle prod. Gideon takes the remaining two down quite violently after a death-defying motorcycle chase.

However, it is probably safe to assume that none of the attackers is dead. It wouldn’t serve any narrative purpose to get Gideon arrested for manslaughter. In the next episode, we might see the four motorcyclists in police custody. However, if they are indeed associated with Junior, it might prove to be near impossible for the police to get any information that can implicate their boss. Junior’s people seem to be staunchly loyal to him.